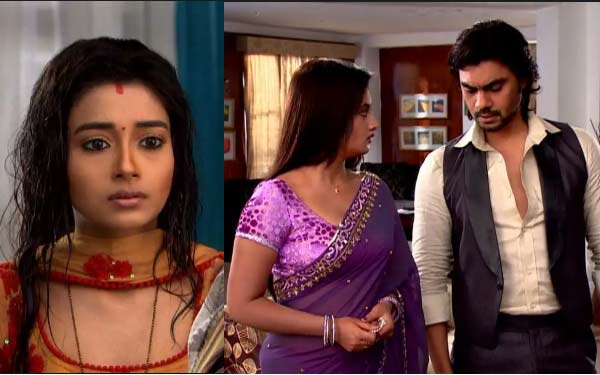 When Damini asks Ichha how could she remove her wedding chain. Ichha shows her the chain which is hidden. Ichha assures Damini that she has to do it so that she can appear before Avinash’s master.

Tapasya is heart broken and furious over Raghuvendra and thinks he is keeping her baby away. Raghuvendra tells her that he didn’t find the baby at underpriviledged home.

Sumitra is throwing tantrums at Raghuvendra’s home because she wants to know the whereabouts of Tapasya. Raghuvendra tells Divya that Tapasya should have gone back to Thakur house.

At Avinash’s house, Ichha is going through some books, when she finds a picture of Avinash along with his elders. Ichha is stunned when Kaka tells her that the man in the picture is Avinash.

Ichha is happy to sees a boy named Kanha who is making Kaka run around, refusing to drink milk. It’s a mystery to Ichha when Avinash appears and tells Kanha with a stern voice to drink the milk.

Raghuvendra complains to God that why isn’t he able to find his daughter. Tapasya is worried and accepts that leaving the baby with an unknown person was a big mistake.

Ichha insist on going to find her daughter but Raghuvendra tells her that tomorrow he would take her to search for their child. Raghuvendra also tells Tapasya that Divya and Sumitra were there.

Ichha is horrified when Avinash gets angry with Kaka regarding Daadu’s health. Avinash warns Kaka that Daadu shouldn’t get well and should only get out of the bed as a dead man.

Tapasya tells Raghuvendra that she wants to marry him right now. Raghuvendra tells her that they will go to Thakur house and convince Tapasya’s parents to accept them.

Raghuvendra meets Jogi and tells him that Tapasya is about to start a new life and that Jogi should bless them. Jogi makes it clear to Raghuvendra that Tapasya has spoiled Ichha’s life.

As Raghuvendra goes out of his house, Sumitra secretly enters his house and meets Tapasya, she tells Tapasya to quickly move out with him before Raghuvendra comes back.

Madhura, Veer’s assistant, asks him about fire in the cabin and he answers her that even he doesn’t know how the cabin caught fire. Veer wants to drop Madhura home but she insists otherwise.

Raghuvendra keeps staring at Veer because he is the guy who had despised Tapasya. Damini tells Ichha that she met Daadu and he has told her to stay for a few more days to look after Kanha

Ichha is happy to care about the new found baby and Damini is supporting her. Ichha starts feeling drowsy and Damini blames Ichha that she is not taking care of her health.

Ichha comes to know that she is pregnant with Veer’s child but she is confused whether to give the news to Veer or not. She thinks that he must be happy with Tapasya’s child.

Raghuvendra brings Sumitra so that she could meet Tapasya. Tapasya doesn’t answer the question, whether Sumitra is responsible for everything wrong that has happened in Tapasya’s life.

Damini calls up Veer to tell him that Ichha is pregnant, but he is not able to answer her. Veer dials back the same number from which Damini had called but he is unable to talk to her.

Raghuvendra gives an advertisement in all the newspapers about the lost baby. He informs Tapasya that they are unable to trace their child. Raghuvendra tells Tapasya that he is not going to lose hope.

Avinash is back in his house but nobody comes to his service. A servant comes and Avinash catches him by his throat so that he should reveal the whereabouts of Kaka and Ichha.

Veer remembers what Ichha had told him, that our mind is trying to tell us something but we don’t listen to it. Veer is feeling good about himself which means that he will get back Ichha soon.

Tapasya is getting ready for the marriage and Raghuvendra enters her makeup room. He tells her he doesn’t believe in omens, and that it was important for him to talk to her.

Veer gets a call and he prepares to go out. Sumitra is worried that Tapasya is still not back for the marriage ceremony. Damini accidentally meets Divya and gets surprised.
Monday 25 February 2019

Tapasya blames Veer for loosing her baby. Veer questions her presence there when she should be at the wedding. After more accusations by Tapasya, Veer goes away.

As a marriage ritual, Raghuvendra applies vermilion on Tapasya’s forehead. She remembers Veer saying that atleast the new man in her life would bring in some stability.
Tuesday 26 February 2019

Jogi observes Damini through his car’s rear view mirror and gets surprised seeing her standing on the road. She avoids him and tries getting away but Jogi follows her.

Ichha is making Kanha recite a prayer when Damini enters and shows her the apology letter printed in the newspaper. Ichha is unable to decide if she should meet Veer or not.

Ichha drops her file at the cafe and attracts Avinash’s attention who then chases her out of the cafe but she hides behind a wall. Veer walks into the cafe as he is eager to meet Ichha.

Back in Bundela house, Gunwanti is busy with preparations for welcoming Ichha, she tells Chanda that she will ask for forgiveness from Ichha. Baldev Singh walks in and joins them.
Thursday 28 February 2019

Tapasya is happy to show Sumitra some new designer sarees by her favourite designer. Sumitra is not interested. Sumitra cautions Tapasya to keep a watch on Raghuvendra.

Veer has decided to leave the country and Gunwanti, Umed and Baldev Singh are seeing him off. Veer is about to leave when he hears Ichha callling him and for a moment he is unable to believe it. Read on March Teasers on True Love 2019 Glow Tv

February Teasers on This is Love 2019