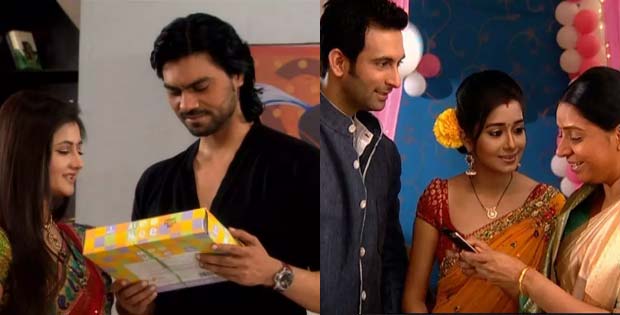 Veer is in Damini’s house and he tells Ichha that she has gone through so much and on top of handling the kids. Ichha tells him that the kids are the ones that actually handled her.

Veer enters with Ichha in Bundela house and Gunwanti screams with happiness. When Baldev Singh asks for forgiveness from Ichha, she stops him by saying that he should bless her.
Monday 4 March 2019

Gunwanti asks Ichha what would she eat, she hesitantly says that she would like to eat something sweet. Chanda tells Gunwanti that Ichha would bear a son since she wants to eat sweet.

Sumitra enters and starts taunting Ichha. Sumitra questions Ichha by first not addressing her name properly and then by taunting her about the way she lived while she was away.
Tuesday 5 March 2019

Gunwanti tells Baldev Singh that Ichha’s baby shower celebrations should be grand. Baldev Singh also agrees, as Ichha is the only daughter-in-law of the house.

Ichha wants Kanha to get ready but gets surprised to see that he is ready for school as Veer dressed him up. Ichha doubts if Veer will think of them as his own kids.
Wednesday 6 March 2019

Sumitra calls up Tapasya and tells her that she has not collected her medical report. Tapasya tells Sumitra that she has seen Ichha and Veer at the saree shop and that Ichha is also pregnant.

Raghuvendra takes the blessings of Gunwanti and tells her that he is incomplete without his wife so she should give her blessings to Tapasya too. Gunwanti meets Tapasya and blesses her.
Thursday 7 March 2019

Raghuvendra is in Thakur house and he is observing some pictures of Tapasya. Raghuvendra tells Jogi that Tapasya gets emotional whenever she gets remembers the Thakur family.

Tapasya returns the bangles that Raghuvendra has given her as a gift and tells him that she won’t be able to give him a child anymore. Raghuvendra gets stunned after Tapasya gives him the news.

Tapasya remembers her parents and cries that no matter how cruelly the children behave, parents always forgive them. Tapasya has difficulty finding the answers for Raghuvendra.

Raghuvendra says sorry to Tapasya as he was out the whole night. He tells her that he gave a thought about her not being able to bear a child and concluded that it doesn’t matter to him.

Veer persuades Damini to do the ritual on Ichha’s baby shower but Gunwanti tells him that only a woman who’s husband is alive can give the blessings. Veer tells Damini to bless Ichha.

Sumitra appreciates the fact that Chanda is working hard and tells her that she is sorry for Tapasya since.

Tapasya is very sad at the loss of her child. Ichha gives birth to a baby boy.

The doctor says that Ichha’s baby is dead. Sumitra, with the help of a nurse, manages to kidnap Ichha’s baby.

Jogi and Divya call Tapasya to check on her. Tapasya says that she alright. Jogi asks Raghuvendra to look.

Raghuvendra and Tapasya go to the orphanage where Tapasya lost the baby. They spot Pushkar there with Ichha’s baby.

Jogi and Divya finds out about the baby’s demise and are upset. Raghuvendra and Tapasya bring the baby home.

Sumitra finds out that Raghuvendra has brought Ichha’s baby home. Gunwanti gets angry with the adopted kids.

Sumitra scolds Pushkar, as due to his mistake Raghuvendra brought that baby home. Tapasya informs Divya about the baby

Ichha and Veer decide not to have a child of their own and raise the adopted kids.

Gunwanti is not happy with Veer’s and Ichha’s decision and asks them to rethink.

Tapasya finds out from Sumitra that Ichha’s baby is dead. Raghuvendra and Tapasya plan to visit Ichha.

Raghuvendra and Tapasya invite Ichha and her family at their baby’s naming ceremony. Raghuvendra is sad to find out that Ichha’s baby is dead.

Raghuvendra and Tapasya decide to name their baby, Yuvraj. Sumitra criticizes Ichha for not attending the function.

Gunwanti scolds Kanha for being mischievous. Ichha feels that there is some connection between her and Yuvraj

Tapasya asks Ichha what she was doing with Yuvraj in her room. Sumitra insults Ichha

Ichha is very upset over what that happened at Tapasya’s place.

Tapasya is angry with Raghuvendra but he manages to convince her. Ichha cannot sleep at night

Raghuvendra finds out that Ichha had fed Yuvraj. Tapasya gets worried to see Ichha in her room.

Tapasya learns about Ichha feeding her child and insults Ichha. Raghuvendra asks Tapasya to thank Ichha instead of insulting.

Gunwanti accuses Kanha of stealing. Damini is worried that if Gunwanti doesn’t accept Kanha and Mukta,

Veer surprises Kanha with a new toy. Damini tells Jogi that Veer and Ichha have decided to adopt Mukta..

Raghuvendra tells Sumitra that kids can understand only the language of love. Raghuvendra informs Ichha that doctor has suggested.

Raghuvendra hides the truth from Tapasya as he feels Tapasya would not agree to let Ichha feed Yuvraj.

Police arrests Raghuvendra for threatening a police officer on duty. Ichha bails Raghuvendra out of the jail.