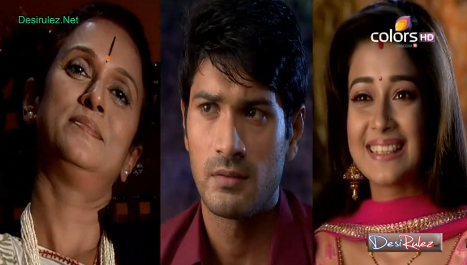 Surabhi tells Agarth that Kajri called here in Thakur House. Agarth asks Nirbhay about Kajri. He replies that she has gone to market with bua ji. Agarth tells him that your wife called up at Thakur House.
Nirbhay takes the phone and asks her what she is saying. She says I am here risking my life to monitor everyone’s moves and your wife is all set to ruin the plan. Nirbhay gets angry at Kajri. She has just spent 4 days with that girl (Meethi) and has started flying high. Surabhi tells him to take care of his wife or everything will be over. Today she handled it but what if she calls again and tells everyone. She disconnects the phone. Nirbhay is in full angry mode and fumes, Kajri!!

Vaidh ji and Kaki are discussing something. Akash notices them. He asks if they are hiding something from him. Tell me everything. Kaki shares that they need the city doc to check Meethi as she is not responding to their medications. She cannot go there for she lacks that mush strength. The government hospital is 2-3 kilometres away from here. He should get the doc from there. Akash agrees to go. He tells kaki to take care of his Meethi for him. He speaks to an unconscious Meethi. I wont let you slip away from me. I will be back soon. Saying so, he leaves to get the doc.

Tappu sits next to the phone only in case that Kajri calls again. She wonders who she is and how does she know Meethi. Maybe Ammo knows about her. I should speak to her. She gets up to go.
Ammo is lighting diya in front of Iccha’s photo. Kanha looks at her from a distance. He notices that her finger is about to get hurt by the match stick and rushes to her. he chides her for being so careless and asks her to rest for some time.
She shouts back how I can rest. All of you try to make me understand that everything is fine and that I should rest. But how can I rest you tell me. I pray in front of that stone idol everyday but he doesn’t feel like listening to me. What was my age when he snatched away my husband from me? I came here to the city all alone with small Icchki in my arms. I worked hard every single minute so as to raise money to support Iccha. He took her away from me too. Now Meethi was her last memento from her side. Its been almost a month that I have seen her. Everyone keeps telling me she will be back but when?? Tappu listens to her and shuts her eyes in pain. She decides not to share anything with Ammo.

Damini continues (crying), Kanha you know we raised her with so many difficulties. Iccha dint raise her, I did. Her words echo in my head – Anni Anni!! I cant understand what to do. Now I will only rest once Meethi is here. Tappu pats her from behind. Damini turns to her and asks if she got any news about Meethi? Tappu tells her she is fine. She is with us only. Our blessings are with her. Never think wrong. How can you lose hope so soon? If Iccha was here then she would never have lost hope. Damini hugs her. tappu asks her to stop crying and assures her Meethi will be back soon. She takes her to rest.

Akash is running around and clashing into people. He crashes in to one and the paper from his hand fell down. Akash apologizes to him and bends down to pick it up. He notices the missing pic in the paper (of Meethi and him) and picks it up. He hides his face and rushes from there. He reaches the government hospital. He thinks he got saved by luck today. But now his and Meethi’s name are out in the newspaper. He doesn’t have much time now.
He picks up a cloth and hides his face. He walks up to the nurse and asks for the doc. Meanwhile a police constable who was there sees the newspaper ad and gets up to look at everyone. The nurse asks for his details. He shares his real name and address but decides not to share Meethi’s name. She shares with the ward boy that Dr. Awasthi will be going for outdoor visit. Akash notices the constable coming towards him and he disappears in a flash as she turns to look at the register for something.
The constable asks him to stop. Akash thinks he has called him but fells relieved when the constable goes to speak to someone else. Next the ward boy hands the paper to doc who was to go out. He asks to keep the bag here. But the ward boy is surprised to not find the bag there. Akash is hiding in the back of doc’s car and puts knife on his neck as soon as he sits in. He threatens him to do as he says.

Pavitra and Kajri return home. Agarth asks Kajri where she had gone. Kajri stammers market. (ok, cutting it short). Her lie gets blown up but she continues declining while stammering. Pavitra finally gets slapped by Ekadashi. She is angry with Pavitra. Mistake can be forgiven once but if one does the same mistake again and again then it wont be forgiven. This girl made a fool of you and you dint even understood it. Kajri again tries to say that she was tired so was standing in the shade of PCO but Maiyya point blank tells her, they have no place for liars in their home. Nirbhay says bua ji (@ Ekadashi) she is my wife. Its time to teach her a lesson, today only!

Nirbhay holds Kajri’s hand and starts taking her away. She cries hard (poor girl…felt bad for her) and asks Pavitra to forgive her (Pavitra herself is scared). Nirbhay utters….I will take care of you today for once and all. Scared, Kajri calls out to everyone but they play deaf ear to her. he picks up the hunter on his way to his room and takes Kajri inside.

Akash brings the doc to the banjara’s place. The doc warns him that he is doing the wrong thing. Akash folds his hand. He says I beg you I will explain everything to you later. My wife needs immediate treatment. She is not in a state to come to the hospital. Hope things don’t go out of hand. They both go in leaving the newspaper in the car only.

Nirbhay is beating Kajri all black and blue. She is shouting for help and forgiveness but he doesn’t relent. She gets a chance to run out. She comes up to Agarth and asks him to forgive her. She apologizes to Maiyya as well but of no use. She runs upstairs. Nirbhay follows her holding the hunter in his hand angrily. She enters a room and closes it from inside. He tells her to open it but she doesn’t. He ends up locking her in that room. She turns and is shocked to find Kadambari (Agarth’s wife) there. She cries harder and tells her not to hurt her. Both look at each other with pained and equally shocked expressions. Kadambari comes to her and notices her wounds. Kajri feels scared first but then ends up hugging her and cries (felt so bad for her and mami ji).

Surabhi gets a call from some Private Number. There’s a lady on the phone who asks her if she is enjoying the game. Suarbhi is taken aback but feigns ignorance. The lady says you are a great detective. You are monitoring everyone’s move by staying at their home only. What do you want? Surabhi is completely shocked now. She fumbles what you are saying. The lady asks her not to lie. The game is about to change soon and the mask of innocence which she is wearing will be off her face very soon. Now you will live the rest of your time there being scared. You have enjoyed a lot till date now its your turn to face the music.

Akash comes with the doc who notices the surroundings. He checks Meethi. Akash asks him will she be fine. The doc reprimands him. You look educated. You should understand that she is critical and needed to be hospitalised. If there would have been a slight delay today then we would have lost her. Akash thanks him with folded hands.
The doc says I have given her an injection to clear the poison. She will be awake in a few hours. I am listing down medicines for her. You must get them for her. akash thanks him again and goes to drop him out telling Kaki to take care of his Meethi.

Surabhi is packing her stuff. She is super worried and sweating. She thinks someone knows her truth. It can be anyone. If the truth comes out then she will get insulted. And what if they inform the police too. It is better to head home. Once I reach Aatishgarh, no one will be able to track me down.
Kanha comes there and notices her packing her bag. She fumbles she is going to some relative’s place. Kanha makes her realise she doesn’t have any relative. She fumbles again. Its one of my college friend – Rashmi – she has cancer. Its in the last stage. She wants me to visit her. It’s her last wish. He asks her if he knows her friend. Was she in the same college? I will come along.
Surabhi denies right away. You stay here only. You know everyone’s condition one of us must stay here. She is sweating. He agrees with her. He asks her if he can drop her to the taxi stand. She again negates. I feel scared to travel in a taxi alone. I will take bus. He agrees to drop her at the bus stand.

Doc asks Akash about Meethi. You said she is your wife. She looks like she belongs to a good family. Is it so that he has kidnapped her as well like he has kidnapped him too? Akash nods his head in a no. I have married her. I dint even kidnap you. Vaidh ji said that she is critical and cannot travel. Whatever I have done, I did it for her sake.
The doc says I have done my duty. Take care of her. She should be fine soon. He thanks him again and goes out to drop him till his car. Akash notices the newspaper while putting the bag in his car. He takes it with him. The doc reminds him to get medicines for Meethi. Akash asks for his forgiveness. He also directs him how to go back to the hospital. The doc goes while Akash looks at the paper clipping.

The doc is back in the hospital. He sees the newspaper in some random guy’s hand takes it and notices the ad. He rings up the police station saying he knows their location.

Surabhi is ready to leave. She feels it (the lady who called her) must be someone from this home only but who. Could it be Mukta? Kanha comes and disrupts her thoughts (kidding about thoughts…she is useless). She hands him the almirah (cupboard) keys and asks him to keep them safely as he keeps forgetting things. He reminds her that she is just going for one day. She says yes. But I don’t want to meet anyone before leaving. Everyone is already so worried about Meethi if they hear about my friend they will get more upset. He tells her that he has told Ammo. She can meet him for 2 minutes before leaving. She has no choice but to agree. CONTINUE READING FROM NEXT PAGE 2 BELOW