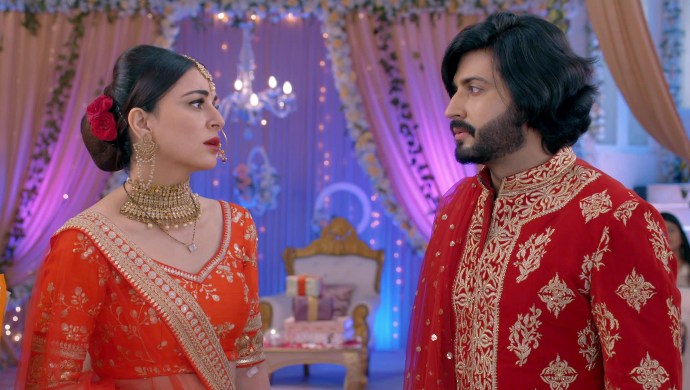 This is Fate November 2021 Teasers

Karan Gets Arrested Meanwhile, Prithvi threatens to expose Megha on This is Fate November 2021 Teasers.

The lawyer proves Preeta guilty. The judge is about to announce his verdict when Karan intervenes and proclaims that he has murdered Akshay. Preeta is released, and Karan is taken to the police station.

Preeta struggles to stop Karan’s arrest. Prithvi learns that Megha has been blackmailing him, but she still asks him for INR 50 Lakh. Later, Pammi questions Rakhi for not fighting for Karan.

Pammi tries to turn Rakhi against Preeta, but Rakhi scolds her for it. Prithvi tells Sherlyn that Megha has been blackmailing him. Later, Kritika questions Sherlyn on seeing her in Prithvi’s room.

Mahesh assures Preeta that Karan will get bail. Suresh scolds Pammi for thinking negatively about Preeta. Meanwhile, Srishti calls Ruchika, but she disconnects the call. Mahira begins to suspect Sherlyn.

Preeta visits Karan in jail, which upsets Prithvi. Rakhi requests her family to pretend to be happy so that Mahesh’s condition improves. Suresh notices Pammi’s behaviour and gets worried.

Preeta sees Sameer and Srishti’s banter and thinks about getting them married. At a hospital, Preeta learns that Megha is pregnant with Akshay’s child.

Kritika tells Prithvi to be nice to Karan. Preeta, Srishti and Sameer learn that Akshay’s phone is missing. They disguise as eunuchs and visit Megha’s baby shower at Akshay’s house to get the phone.

Megha tells Prithvi that someone took away Akshay’s phone. Meanwhile, Pammi questions Sherlyn about her absence. Preeta returns home and treats Pammi’s sprained foot. Pammi talks to her about Sherlyn.

Prithvi looks for Akshay’s phone in Preeta’s room and Rakhi arrives there. Suresh scolds Pammi for badmouthing Preeta. Prithvi, Sherlyn and Mahira get shocked to learn that Preeta has Akshay’s phone.

Kritika, Sameer, Srishti, and Preeta call a number saved on Akshay’s phone. Rakhi calls Mahesh to tell him about it. Prithvi is shocked to learn that it was Sherlyn’s number and begins to suspect her.

Preeta visits Karan in jail and tells him that Sameer is arranging for Akshay’s phone charger. Prithvi and Sherlyn fear getting exposed. On the pretext of meeting Kritika, he goes to find the phone.

Srishti tells Mahesh how she got Akshay’s phone. Rakhi asks Srishti to marry Sameer. Later, Mahira tries to help Sherlyn steal the phone and Pammi keeps an eye on the duo.