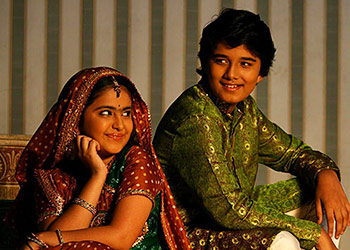 Bhairon and Sumitra find Anandi unconscious inside the room.

While Kalyani Devi keeps taunting Anandi for every small task she undertakes or for every mistake she commits, at the same time Sumitra takes good care of her.

Anandi gets emotional as her parents gets ready to leave. However, Sumitra calms her down and tells her about a fast kept by married women.

While commencing the ‘teej’ ritual Sumitra remembers Jamuna. When the time comes to break the fast, Anandi refuses to eat as she had already has already eaten something with Jagdish.

Kalyani Devi scolds Anandi for disrespecting the ritual. Later, she questions Basant about the rights of a widowed woman and man. Anandi also offers to help Jagdish with his studies.

The teacher at school is impressed with Jagdish’s work. While Jagdish and Anandi are sharing their good moments, Dadisa interrupts and tears the book which Jagdish gave to Anandi

Sumitra stops herself from helping Anandi in the kitchen as instructed by Kalyani Devi. Later in the night Anandi comes across Basant who is drunk.

Bhairon feels insulted when Basant talks about him being greedy for property. Things get worse when the topic of Basant’s marriage is breached.

Bhairon discusses about Basant’s marriage with Sumitra. Anandi befriends a widowed girl and gives her bangles to wear which creates a huge ruckus at her place.

Furious with Anandi’s mistake of giving bangles to a widow who belongs to the family of their arch enemies, Kalyani Devi locks her in a storage room.

The family tries to convince Kalyani, but she doesn’t budge. Jagdish secretly supplies food to Anandi. Bhairon feels helpless as he is unable to do anything about the situation.

Dadisa confronts Sumitra and scolds her for serving Anandi food. She also warns her and asks her to go back to the room. Although Bhairon requests Dadisa not to punish Anandi, Basant interrupts and supports Dadisa.

Sumitra makes an attempt to save Anandi but finds Dadisa guarding the room. Although Bhairon pities Anandi and tries talking to Basant, he supports Dadisa’s decisions. Later, Bhairon and Sumitra find Anandi unconscious inside the room.

Sumitra consoles Anandi after Dadisa punishes her. She also instructs Anandi not to hurt anyone. While Anandi requests Sumitra to take her to her parents, Dadisa interrupts. Later, Sumitra and Bhairon do their best and take proper care of Anandi’s health.

Dadisa is angry at Sugna and tries to slap her. Meanwhile, Bhairon and Basant go in search of Anandi. Later, Bhagwati is surprised to see Anandi.

Khaajan is shocked to see the condition of Anandi. She is weak and unconscious. Later, Anandi tells her mother that she did not eat for many days. Meanwhile, Bhairon and his family are anxious about Anandi.

Kalyani Devi is furious. She shouts at Sumitra for interfering in the fight with Bhairon. Although Sugna tries to soothe the situation, Kalyani Devi warns her for supporting Sumitra.

Anandi is brought back to the mansion by her parents. They try persuading Kalyani, but to no avail.

Khajaan and Bhagwati bid Anandi farwell and leave with a heavy heart. Bhairon and Sumitra then discuss Anandi’s mistakes. Sumitra tells Bhairon to imagine his daughter in Anandi’s place and to help her to resolve the situation.

Anandi is busy in attending to her in-laws, but is saddened that she is considered a thief. Sugna and Pratap are discussing the consummation of their marriage.

Kalyani is continuously making Anandi realize that she’s a thief. Bhairon falls into an altercation with Kalyani and Basant, which upsets Kalyani.

Anandi gets scared of dadisa. Dadisa politely mingles with her, removes her scariness. Both happily watches Tv. Noticing Anandi’s unease around her, Dadisa gently talks to her and eases her anxiousness. On the other side, Bhagwati and Khajaan are relieved

Sumitra make the kids comfortable by playing with them. Kalyani, Basant and Bhawri approach Gehna’s parents for her alliance with Basant.

Bhairon shows his disapproval of Basant’s alliance with much younger, Gehna. Anandi is confused as even Phooli is a widow, but no one thinks of her remarriage.

Kalyani is very happy because of Basant’s upcoming marriage and she allows Anandi to go her parents’ house with Sumitra and Bhairon.

Sugna, Jagdish and Anandi go to meet Abhishek Bachchan who is visiting their village for a film promotion. He conveys a message against child marriage.

The wedding procession is disrupted by a few goons who demand money from Shambhu, but Kalyani manages to drive them away. Anandi insists Gehna to remove the veil from her face

Khajaan Singh tells his wife about the intrigue Kalyani Devi has played to persuade the family to get Basant Singh married. Later, Sumitra reassures the bride’s family that she will take care of her like a sister.

Anandi is shocked to see Gehna getting married to Basant who is older than her. Later, Gehna is welcomed by her in-laws to their house but she is hesitant around Basant.

Bhairon requests Kalyani to let Gehna stay away from Basant for a while, but that upsets her. Sumitra takes Gehna to Basant’s room on their first night together.

Basant forces himself on Gehna on their first night. Next morning, Anandi finds her bruised. Kalyani tries to hide the scratches on Gehna and asks her to get rest.

Gehna is scared of Basant and is unable to adapt to the new environment. On Sumitra’s request, Bhairon talks to Basant about Gehna. However, he scolds Bhairon for interfering in his personal matter. Later, Basant tries to get close to Gehna.

Basant tries to talk to Gehna, but feels miserable and leaves the room as she does not respond. Later, Kalyani Devi sees Basant sleeping outside and requests him to go and sleep in the room. She also tries to console him by explaining the situation.

Anandi is puzzled about everything that’s going on in the family. Bhagwati and Khajan come to take Anandi away for a few days and Kalyani agrees.

Anandi is excited to go with her parents, but Jagdish is not happy. Anandi’s face turn blue when she sees Phooli’s mother not letting her wear any accessories.

Gehna is curious to know about the death of Basant’s first wife. Kalyani Devi instructs Sumitra not to disclose anything to Gehna. Although Gehna asks Basant about the reason behind his first wife’s death, he tries to deviate from the topic.

Anandi has gone to her parent’s home. Meanwhile, Jagdish feels sad about her absence and misses her. He is lost in her thoughts and gets scolding from the teacher for not being attentive. In the interim, Gehna feels miserable being with Basant.

Krishna informs Bhagwati that Champa is pregnant. Anandi rushes to help Champa escape. The villagers call Khajan to join them in killing Champa.

Anandi helps Champa to escape from the wrath of the villagers. Meanwhile, Khaajan Singh finds Anandi’s anklet in the temple and questions her. Later, when the Sarpanch comes to meet Anandi, she shouts at him.

Basant tries to get close to Gehna, but she gets scared and runs out. Basant shares his concerns about Gehna with Dadisa who advices him to control Gehna politely at first. Jagdish gives Anandi a surprise which lifts her sad mood.

Anandi is overjoyed to see Jagdish who has come to take her back home. Gehna asks Anandi about Besant’s first wife and the reason behind her death.

Bhagwati shares her grief of staying away from her only daughter. Gehna tries interrogating Basant to know about his first wife and what led to her death.