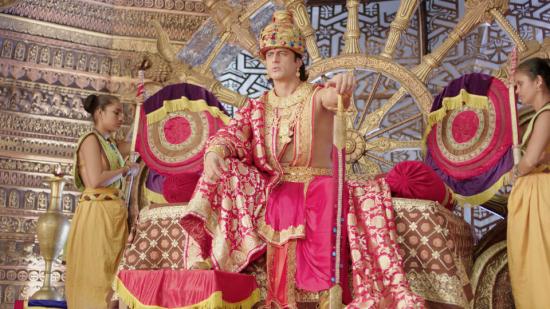 On finding no change in Kaurwaki’s feelings towards Ashoka, Jagannath loses his temper and pushes her off a cliff. Is this the end of Kaurwaki?

Before his first wedding night, Ashoka gets drunk and imagines Devi as a Kaurwaki. Meanwhile, Dharma passes out after Charumitra accuses her of ruining Ashoka’s life by separating him from his love. Dharma informs Ashoka of the sage’s predictions and her motivation for asking Devi to marry him.

As Kaurwaki leaves the kingdom, Ashoka watches. Despite his assurances to his mother that he would embrace Devi, Kaurwaki’s chilly demeanor seemed to have disappointed him. Is it true that Ashoka wants Kaurwaki back in his life? Meanwhile, Siamak is concerned about collecting a vital document that will aid him in wielding his power in Takshashila. Is he going to obtain what he wants?

Sushim approaches Siamak from behind and strangles her to death after watching Dharma catch her stealing the royal stamp. Ashoka and Bindusara come at Dharma’s quarters unaware of the incident and discover her sleeping. Meanwhile, Sushim and Siamak successfully escape through the window. Ashoka, unaware of his mother’s death, expresses his emotions to her by sitting near to her body.

When Ashoka hears Bindusara shout Dharma’s name, he runs towards him and is stunned to see Dharma dead. Vitt tries to bring him back to his senses after he loses his wits and becomes violent. Later, when Siamak intends to leave the palace, Sushim threatens him. When Charumitra learns of Sushim’s role in Dharma’s death, she attempts to conceal the strangling marks on Dharma’s neck by wrapping a necklace around it. Will Ashoka be able to track down the criminal?

Sushim and his evil mother, Queen Charumitra plot their next move while Bindusara sits near the late Queen Dharma’s funeral pyre, mourning. Unable to bear the loss, a bereaved Ashoka reminisces the lifetime of memories spent with his beloved mother. Meanwhile, Kaurwaki returns to her palace in Kalinga.

Seeing Ashoka in a daze, Devi reprimands him for disrespecting his mother by not performing her last rites. Finally out of his melancholy state, Ashoka finds a diamond while gathering the ashes of his mother’s dead body and wonders if she died due to natural circumstances or was murdered.

Siamak kills Bhamini and takes over the kingdom of Takshashila. On the other side, Ashoka performs the last rites of his mother and vows to fulfill her wishes. Alongside, Ashoka investigates the death of Dharma in order to seek the truth behind the occurrence.

To avenge his mother’s death, Ashoka leads his army into battle against Siamak, who now resides in Takshila.  Meanwhile, to reach his desired goal, Sushim decides to join forces with Siamak. Taking the advantage of this situation, Ashoka and Bindusara plan to eradicate all their enemies in a single strike at Takshila.

Ashoka marches with his selective army to Takshila and charges vigorously to avenge his mother’s death from Siamak. Whereas, Radhagupt is commanded to charge upon Anthios at sunrise with the remaining army. Earlier, Siamak imprisons Sushim and teaches him a lesson for torturing him throughout his life. Charumitra, on the other hand, starts bleeding to death due to her black magic activities.

Ashoka’s valiant pursuit of vengeance and attempt to wipe out Siamak meets with an abrupt halt, when he is struck down by a spear catapulted by the army of Anthios. However, Kaurwaki intervenes in the nick of time and gets him to safety. Elsewhere, an enraged Jagannath plans to punish Kaurwaki by taking her life for saving Ashoka. Can Ashoka recover from this fatal injury?

Ashoka’s hunt for Siamak finally comes to an end, after he manages to get a grip on his neck. Is this the end of Siamak? Moreover, Siamak is stunned when he watches Lasandra kill Anthios at Ashoka’s command. Earlier, Siamak infuriates Ashoka by stating the reason for killing Dharma. Later, he has a narrow escape when Ashok’s leg gets trapped.

After a long struggle, Ashoka finally avenges his mother’s death by strangling Siamak to death. Mahamatya Khallatak betrays Sushim and manages to escape alone. However, Sushim’s presence remains unnoticed by everyone, which gives him the advantage of hearing Siamak’s truth, that he isn’t Bindusara’s son. Ashoka, on the other hand, returns to the cave to meet Kaurwaki.

On seeing Devi in the cave, Ashoka misjudges her as his saviour and tries to come closer to her. Kaurwaki is heartbroken on seeing the closeness between Ashoka and Devi and refuses to face Ashoka. However, Devi’s confession, the very next morning, makes Ashoka realise his mistake and he immediately rushes out in search of Kaurwaki.

On finding no change in Kaurwaki’s feelings towards Ashoka, Jagannath loses his temper and pushes her off a cliff. Is this the end of Kaurwaki? Elsewhere, Devi and Ashoka plan to leave for Patliputra as they fail to find Kaurwaki. However, Jagannath arrives at the cave and portrays Kaurwaki’s death as a suicide and holds Ashoka responsible for her death.

On hearing about Kaurwaki’s suicide, Ashoka rushes to find her and manages to rescue her from the river. Seeing her alive and breathing, Ashoka tries to save her and takes her to the nearby temple. The monks listen to Ashoka’s plea and try to help him.  On the other hand, Kevalnath watches Ashoka carry Kaurwaki from the river and plans to kill her. Will Kaurwaki survive?

On learning that Kaurwaki’s condition is critical, Ashoka panics. He tries using his late mother’s remedy to help her regain her consciousness. Anxious to kill Kaurwaki, Kevalnath makes his move, but Ashoka arrives on time and saves her. In order to ensure her safety, Ashoka and Devi decide to take Kaurwaki along with them to Patliputra.

Jagannath arrives at Bindusara’s court, accusing Ashoka of killing Kaurwaki. Earlier, Bindusara gets unconscious after hearing the truth about Siamak from Sushim. Charumitra takes the advantage of the situation and drugs Bindusara with her magic potion, this gives Sushim the total control over Bindusara. Later, Bindusara makes Sushim his successor which makes Ashoka clueless of the upcoming danger.

Jagannath’s intention to have Ashoka framed is fulfilled when Sushim stabs Kaurwaki. But, is Kaurwaki the one really stabbed? Sushim and Jagannath successfully pin Kaurwaki’s death on Ashoka and sentence him to death. Vitt’s frantic pleading causes Bindusara to postpone the execution to the next day, but Sushim wants Ashoka burnt alive. Will Ashoka be able to escape his impending death sentence?

Ashoka’s sentence is carried out by Sushim, who rejoices on seeing his arch enemy being burned down. Earlier, without Charumitra’s knowledge, Sushim cunningly drugs Bindusara with a potion that will keep him in an unconscious state. Meanwhile, to everyone’s surprise, Kaurwaki runs to save Ashoka and reveals the truth about her murder attempt.

On finding out that Sushim has murdered Charumitra, thinking she was Kaurwaki, Ashoka takes Sushim to be judged by Bindusara. But while stating his facts before Bindusara, everyone is shocked to find that the latter is dead. Sushim is declared King, by Radhagupt, and the former gets Ashoka arrested. Earlier, Kaurwaki vents out her anger on Jagannath.

Determined, Ashoka plans on saving Kaurwaki, Vitt and Devi, who are held captive by Sushim. Sushim then demands Ashoka to surrender or deal with dire consequences. At that moment, Khallatak requests Ashoka to believe in him and join forces to put an end to the evil Sushim. Earlier, Ashoka manages to escape on being sentenced by Sushim.

Sushim falls for Ashoka’s trap and eventually gets killed. The very next day, a grand ceremony is organised to honour Ashoka as the new emperor. However, Princess Chanda arrives at the ceremony and accuses him of killing his brothers.

Devi’s another attempt to unite Ashoka and Kaurwaki fails as Ashoka denies to accept Kaurwaki. However, Devi plans to leave Patliputra for Ashoka and Kaurwaki’s sake. Earlier, Chanda reveals about her pregnancy and curses Ashoka for killing Sushim.

After a fierce battle with Kalinga, i.e., Kaurwaki, Ashoka finally emerges victorious, but, not before Kaurwaki making him realise his role as an emperor. On seeing Ashoka in his fearful ‘Chand Avatar’, Radhagupt leaves him, while Devi walks away with her son. After all the bloodshed, Ashoka seeks peace, repents for his wrongdoings and even publicly accepts his mistakes. As a mark of respect, we have the ‘Ashoka Emblem’ and the ‘Great Ashoka Chakra’ that reminds us about this brave emperor.