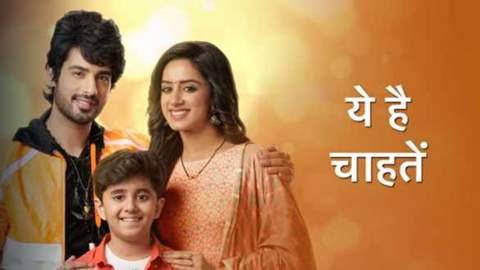 Saaransh is told by Preesha to stop wasting time playing video games with Rudraksh. Following that, Sharda talks to Preesha about her history with Keerti.

Rahul’s confession is foiled by a cunning plan carried out by Yuvraj. Preesha intends to swap out Sharda’s DNA sample, but Sharda informs Rudraksh about it.

Rudraksh is successful in bringing Neerja back to life as she discovers a stunning truth about Preesha. Later, Preesha and Rudraksh set off on a journey to aid Sharda.

The DNA sample is tampered with by Preesha and Rudraksh. The cops show up at the Khuranas with an arrest warrant as he tries to confront her about Saaransh.

As Rudraksh reveals to her the proof of Sharda’s innocence, Preesha’s prayers are answered. As Neerja’s recovery is shown, Yuvraj becomes alarmed.

Rahul apologizes to Preesha for wrecking her life and demonstrates to Rudraksh the evidence of her innocence. Later, Rudraksh cries out to Preesha and begs for her approval.

Preesha slaps Yuvraj for his disparaging remarks as Rudraksh confides his sentiments to her. Rudraksh and Yuvraj later get into a physical altercation.

Balraj hands over the court order to the police and brings Sharda home. Later, Rudraksh apologises to Preesha in front of their parents as a grand gesture.

Ahana and Mishka are enraged by Rudraksh’s apology to Preesha while Yuvraj receives a shocking information. Later, Rudraksh gets romantic with Preesha.

While Preesha and Rudraksh enjoy their honeymoon, Yuvraj finds a mysterious woman looking for Preesha. Later, Rudraksh and Preesha’s evening gets spoiled.

Preesha punishes Rudraksh, assuming that he asked the hotel to send the gifts. Later, he concocts a unique way to get Preesha to confess her feelings.

Upon getting tricked, Yuvraj pays the price for his blind belief, while Rudraksh returns to the Khurana mansion. Later, the Khuranas meet an unexpected visitor.

Rudraksh finds Preesha in a cab with Yuvraj. Furious, he attacks Yuvraj. Later, Preesha is shocked when she gets a blast from the past.

Preesha and Vasudha get emotional on seeing Mahima after a long time. While Rudraksh introduces Saaransh to his real mother, GPS gets a lovely surprise.

Mahima opens up to Preesha, Vasuda and GPS about the struggle she faced all these years. Later, Preesha is left stunned by Mahima’s statement.

Preesha is left devastated when Mahima asks for Saaransh back. Later, Preesha gets shocking news and struggles to tell Rudraksh the truth. How will he react?

Ahana reveals the truth to Saaransh, making him take a drastic decision. Later, Rudraksh berates her and requests her to leave the Khurana mansion.

Rudraksh thanks Yuvraj when he brings Saaransh back to the Khurana mansion. Later, Mahima attempts suicide by consuming an extra dose of sleeping pills.

Rudraksh apologises romantically to Preesha, while Balraj gives an astonishing news to the Khuranas. Meanwhile, Mahima leaves the Shrinivasan house.

Balraj and Ahana face humiliation at Rudraksh’s concert. While Mahima does the unthinkable after Rudraksh gets her home, Preesha meets Yuvraj at night.

Preesha makes an attempt to get Saaransh closer to Mahima. While Rudraksh’s romantic move backfires on him, GPS and Vasudha get into a heated exchange.

Preesha puts her life on the line to save Mahima after finding her in trouble. Meanwhile, Rudraksh gets worried when he is unable to find Preesha.

Saaransh alerts the family after finding Yuvraj sneaking around the house. While Ahana and Vasudha get into a heated exchange, Rudraksh learns a shocking truth.

GPS questions Preesha and Rudraksh if Mahima is causing any strain in their relationship. While Ahana suspects Mahima’s condition, Rudraksh gives Preesha an ultimatum.

Saaransh tries to steal some cash from Balraj’s locker. While Ahana spills the beans, Balraj’s decision drives Saaransh to do the unthinkable.

Rudraksh is left shattered on learning about Saaransh’s fatal accident. Later, Mahima reveals a shocking truth to Balraj about her relation to the family.

Rudraksh, Preesha and Mahima are stunned to see the house decorated for Saaransh. While Preesha gets good news about Mahima, Rudraksh loses his cool.

Mahima helps Saaransh get used to walking again after his injury heals. While Balraj gets a legal notice from Mahima, Rudraksh asks her to leave the house.

Despite Preesha’s desperate cries to stay, Mahima leaves the house. While the custody battle for Saaransh begins, Rudraksh decides to do the unthinkable.

Preesha finds Rudraksh and Saaransh missing from the house and finds their passports missing as well. Later, Mahima gets the custody of Saaransh.

Preesha bumps into a stranger at the market, who identifies Mahima as Anjali. Later, Preesha asks Mahima to give her some time to plan for her anniversary party.

Rudraksh eagerly awaits Preesha’s arrival at their anniversary party. Later, he overhears Balraj’s conversation with Preesha and grows worried about her unexpected delay.

Sharda slaps Preesha when she ties the knot with Yuvraj. Later, the Khuranas learn an alarming truth as Preesha makes a shocking announcement to Rudraksh.

Yuvraj remembers the deal struck with Rudraksh and Preesha. During the Gruhapravesh, Mahima remembers her plan while Rudraksh takes a firm stance.

Saaransh locks himself in a room after learning about Rudraksh and Mahima’s marriage. On the other hand, GPS refuses to accept Preesha and Yuvraj’s wedding.

Preesha consoles Saaransh and informs him about the secret play with Rudraksh. In the meantime, Mahima recollects all the men she conned in the past.

Preesha visits the police station and obtains a vital clue against Mahima. Later at the Shrinivasans, Preesha and Rudraksh share a romantic moment.

Preesha and Rudraksh receive a warning from Yuvraj while they get romantic. At midnight, Mahima tries to seduce Rudraksh when Saaransh is deep asleep.

Sharda meets with a head injury and gets hospitalized after falling prey to Mahima’s cunning trap. Elsewhere, Preesha hurts her hand while cooking food.

At the hospital, a concerned Preesha meets Sharda and pours her heart out. Later, Yuvraj saves Preesha and Rudraksh from getting exposed in front of Mahima.

Mahima tries to get close to Rudraksh and Ahana captures the moment to upload it on social media. Witnessing this, a jealous Preesha calls up Rudraksh.

While Saaransh hides in the trunk of Mahima’s car, GPS reprimands Yuvraj for sitting idle at home. Elsewhere, Mahima makes a shocking disclosure to the media.

Rudraksh and Preesha manage to get Saaransh out of the trunk of the car. Later, Mahima confronts Preesha when she finds her with Saaransh.

Rudraksh rebukes Mahima for not taking care of Saaransh properly. Around midnight, Mahima spikes Rudraksh’s juice with the intent of getting intimate.

Rudraksh consoles an emotional Saaransh as he fails in his exams. Later, Preesha rushes to the Khurana mansion as Sharda is in discomfort!

When Mahima notices Rudraksh and the Santa in a vulnerable situation, she becomes suspicious. Later, she creates a trap to find out who the real Santa is.

Rudraksh is accused by Mahima of assisting Preesha and Yuvraj in breaking into the Khurana house at the Christmas party. Later, Preesha uses a cunning technique to defend herself.

Preesha and Rudraksh resolve to divulge Mahima’s truths after meeting Arjun. Later, Arjun shows up with a fascinating tidbit about Mahima!

Preesha gets into difficulties as Arjun accuses her of plotting against Mahima. Learn how Mahima was able to change the situation.

Rudraksh is duped into taking part in a media interview by Mahima. Preesha discovers a witness against Mahima in the interim.

Preesha and Rudraksh ask Gautam to travel to Delhi as the police are not provided with any proof against Mahima. Preesha is poisoned and afterwards passes out.