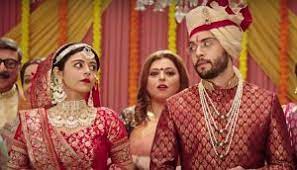 As Garima expresses sympathy for her, a tearful Gungun teases her. Dr. Riddhesh is surprised when Akriti’s father makes an odd request of him in the meanwhile.

Dr. Riddhesh learns of her accident as Golu offers his assistance and support in locating Gungun. Later, Dr. Riddhesh and Golu hurry Gungun to the hospital.

Dr. Riddhesh queries Gungun about the cause of her haste once she regains consciousness. They then demand that Anubhav vacate their line of sight.

When Akriti finds out that Anubhav visited Gungun at the hospital, she expresses her disapproval. Later, Golu confronts Anubhav for making a poor decision.

Maya tries to convince Gungun to go abroad with her, but she refuses. Later, Gungun decides to attend Anubhav’s wedding.

Worried about Gungun, Garima visits the temple for her well-being. Elsewhere, Ranvijay convinces Gungun to go for a date.

Anubhav reaches the temple with Dr. Riddhesh and finds Gungun being forcibly married to Ranvijay. Later, he does the unimaginable to stop Ranvijay.

Anubhav puts vermillion on Gungun’s forehead and pronounces her as his better half. Later, he apologises for his act when Dr. Riddhesh questions him about it.

As Gungun recalls the moment and remains obstinate at her decision, Dr Riddhesh advises her to be strong. Elsewhere, Anubhav ties the knot with Akriti.

Gungun comes to Anubhav’s wedding, and Kulshreshth is astounded to see her with vermillion. However, Akriti taunts and questions her about her better half.

While Akriti asks Gungun her husband’s name, she remains silent as she wants Anubhav to answer. However, Anubhav refuses to reveal the truth.

Gungun finds Dr. Riddhesh in an unconscious state and calls Garima for help. While she takes him to the hospital, Anubhav receives the news.

Gungun asks Anubhav to leave the hospital but the latter refuses and stays by her side. Elsewhere, the Kulshreshthas are shocked to find Anubhav missing.

Akriti is shocked to see Anubhav at the hospital with Gungun and questions him for missing the wedding rituals.Later, she asks him to return with her.

Anubhav joins Gungun in bringing the holy flowers for Dr. Riddhesh’s well-being. However, upon their return, Gungun finds Dr. Riddhesh has already passed away.

Anubhav learns about Dr. Riddhesh’s demise and hurries to the hospital. Later, Akriti reacts when she does not find Anubhav during the function.

Anubhav arrives before Gungun and tries to soothe her during the tough times. Later, Akriti gets envious as she finds them together and attempts to split them.

Akriti learns at the hospital that Gungun’s mysterious husband is none other than Anubhav himself. Later, she confronts Anubhav about it.

While performing the last rites of Dr. Riddhesh, Gungun gets drowned in the water, but Anubhav saves her. Later, the Kulshreshths sympathise with Akriti.

Charudutt berates Anubhav for prioritising Gungun over Akriti and tells him not to take care of her anymore. Elsewhere, Ranvijay blackmails Gungun.

Anubhav tries to stop Gungun from running away from her problems and expresses his feelings for her. Later, Maya returns and gets surprised to see Anubhav with Gungun.

As Akriti learns from Maya about Anubhav’s visit to Gungun, he faces resentment from the Kulshreshths. Elsewhere, Maya desires to sell Dr Riddhesh’s property.

Anubhav collides with Gungun’s car and asks her to meet in the evening. While she agrees, Akriti plans to go for dinner with the ladies of the house.

The Kulshreshthas spot Anubhav at a restaurant when he lies to them about his company. Later, Gungun refuses to accept the Kulshreshtha’s offerings to Dr. Riddhesh.

Akriti forces Gungun to reveal the identity of her husband amid Dr. Riddhesh’s Tehravi. Later, Ranvijay announces his marriage to Gungun.

Anubhav rebukes Gungun for her choice of marrying Ranvijay, leaving her feeling emotional. Later, Ranvijay comes with his parents to meet Gungun.

Anubhav visits Gungun’s house to return her gift. Meanwhile, Garima questions Gungun about her decision to marry Ranvijay, but she refuses to answer.

Anubhav decides to go on a honeymoon with Akriti. Gungun decides to teach him a lesson when Ranvijay requests Maya to invite the Kulshreshths to the wedding.

Gungun invites Anubhav and the Kulshreshthas to her wedding. While Anubhav says that she doesn’t deserve anyone’s love, Gungun prepares for her wedding.

Maya gets furious at Kulshreshths and blames Anubhav for Gungun’s condition. Meanwhile, Anubhav confronts Gungun and expresses his feeling for her.

Gungun requests Abubhav to put vermillion on her forehead before Maya arrives. However, Maya and Ranvijay come to the hospital and are determined to conduct the wedding.

After Akriti complains about Anubhav’s act, Charudutt forbids him to meet Gungun and her family. Elsewhere, Ranvijay threatens Gungun to get acquainted with him.

Ranvijay reveals to Maya about Gungun’s husband. As Gungun discloses the same to Garima, an infuriated Maya visits the Kulshreshths to warn Anubhav.

Despite Charudutt’s forbidding, Anubhav and Gungun spend some romantic time. However, Ranvijay informs the Kulshreshths about them.

Akriti and Charudutt come looking for Anubhav, but Gungun hides him in her father’s room. Later, Gungun decides to accompany Anubhav to Mumbai.

Akriti feels suspicious about Gungun and decides to leave for Mumbai after Ranvijay instigates her. Elsewhere, Gungun and Anubhav spend a lovely time in Mumbai.

Anubhav and Gungun spend quality together when they get interrupted by a call from Boo. Later, Akriti asks Gungun to show her surroundings on a video call.

During the seminar, Ranvijay asks his men to work on kidnapping Anubhav. Meanwhile, Akriti and the family reach Mumbai.

When Akriti accuses Gungun of ruining her life, Chanchal unveils a truth. Later, Gungun decides to leave Anubhav to save his relationship with Akriti.

While Anubhav tries to convince Gungun to step out of the room, she writes an emotional letter. Meanwhile, Ranvijay arrives at the hotel and watches their drama.

Ranvijay abducts Anubhav and hands him over to the terrorists. Meanwhile, Gungun feels guilty and tries in vain to contact Anubhav.

Despite their threats to hurt him and Gungun, Anubhav refuses to aid the terrorists. Gungun, on the other hand, makes the decision to report Anubhav missing.

Gungun is threatened by the terrorist organization to go back to Lucknow. But she becomes increasingly determined to track out Anubhav and return only with him.

When Anubhav contacts Gungun to beg her to leave the city, she refuses. Later, after witnessing Gungun’s bravery, he declines to aid the terrorists.

Gungun meets with the chief of police and requests his assistance in locating Anubhav. The Kulshreshths are informed about Anubhav’s kidnapping in the meanwhile.

Akriti furiously rejects Gungun’s idea to save Anubhav from the kidnappers. During a protest to seek justice for Abhinav, Gungun gets unconscious.

Gungun initiates a search drive and wants to assist the police find Anubhav. The Kulshreshths assure Akriti to rebuild her relationship with Anubhav.

A fearless Gungun teams up with the cops to save Anubhav from the terrorists. Eventually, the terrorist leader shoots Anubhav in the back.

Charuddut gets agitated as he finds Gungun in the hospital. Later when Akriti humiliates Gungun for her marriage to Anubhav, Gungun replies aptly.

As Anubhav’s condition deteriorates, Gungun performs a hard penance and prays for the sake of the former’s fast recovery. Ranvijay gets arrested by police.

Gungun learns that Anubhav’s blood group matches with her and that he desperately needs blood. While she rushes to help him, Akriti questions her motive.

Gungun gets into argument with Akriti to donate blood to Anubhav to save him. While Anubhav regains his consciousness, the blood loss makes Gungun fall weak.

Gungun begs Akriti for a chance to see Anubhav. However, when he visits her, Akriti grows upset. Later, Charudutt gets furious at Anubhav’s action.

Because Akriti and Charudutt oppose the former’s visit to the hospital, Gungun disguises herself as a nurse to see Anubhav. Unfortunately, Akriti manages to catch Gungun.

Charudutt and Akriti take Anubhav out of the hospital as he confesses his love for Gungun. Nevertheless, when he comes home, Gungun is removed from him.

To defend Gungun’s motives, Anubhav engages in a debate with Charudutt. Gungun is shocked when Charudutt approaches her with his startling demand.