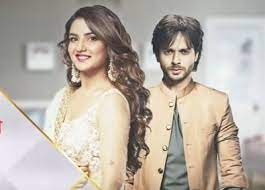 Happy checking the earring. She takes Rocky aside and says I got this earring from your kitchen, it belongs to Jyoti, it means she came to your house, if Jyoti called Kumar, she would have told her location, I feel something is wrong. Rocky says it means Kumar is involved in Jyoti’s murder, Kumar did this. Happy says stop, if you ask Kumar, he will get alert, we should find out his plan. Kumar comes and says we regret for Jyoti’s death, we have to go to hotel and manage the event. Honey thinks to take Madhu’s help to go to hotel. He says I have to give this file to dad, Khushi angel forgot this. Madhu asks him to go and give it to Rocky. Honey asks Sweety to come with him. Rocky thinks to punish the culprit. Happy thinks how did the earring come home. Honey and Sweety come to the hotel. Kumar sees the goons. Meenu and Kabir come in disguise. Happy instructs all the staff members. She sees Meenu and says I think I have seen you somewhere. Harleen asks Happy to come and help her. Happy goes.

Rocky goes out. Happy says everything is set, Harleen go to kitchen and check things. Harleen goes. Happy sees Honey and Sweety, and asks them to go home. Honey says please let me stay here, I promised Sweety that I will take her on date. Happy says come tomorrow, go home. Honey says fine. Happy picks his drawing book and gets Harleen’s call. She says I will call you back. She sees the bomb drawing and gets shocked.

Rocky and Kumar welcome the minister at the hotel. Rocky thinks is his truth something else. Honey says I wanted to show this drawing to you, I saw this in decoration box, I wanted to ask you about it that day, but you got busy. Happy thinks it means Honey has seen the bombs in the hotel. She goes and tries to find the bomb. She finds one in the basket. She says the bombs are placed everywhere, someone will have the detonator to activate the bombs. Kabir and Meenu are in kitchen. Kabir gets message and shows the message to her. He says its time, happy diwali. They go.

Harleen sees them and asks where are you two going, I think I have seen you. Kabir says function is going to start. Harleen asks who will do the kitchen work here, don’t step out of the kitchen, go and work. Meenu gets angry. Kabir stops Meenu and asks her to control her anger, there shouldn’t be any mistake, do as she says. Harleen asks them to work. Honey and Sweety see the bomb. Happy says leave it. Honey says its just a clock. Happy asks her to take Sweety home. He says I will help you, what’s the problem, I will solve it. She says there are bad people here, Rocky, Harleen and I will save the hotel, Madhu and Sandhya are alone at home, who will take care of them and save them. Honey says I will save them. Happy says you have a phone right, call me when you reach home. Happy sees Rocky and asks Honey to go home. She calls Rocky and can’t connect. She sees Rocky on stage. She thinks to go to Rocky and tell him. She says shall I make an announcement, everyone will go and stay safe, there are many people here, there will be chaos, what if the person activates the bomb, better find that person with the remote. Honey and Sweety come home and shut the door. Madhu asks what happened.

Honey says I will take care of you both, don’t go out, its dangerous. Madhu asks what happened. Sweety says its like solar eclipse today, stay at home. Honey says you are smart. Madhu says I will go to hotel. Honey says I m not joking, dad said none will go out of home, I will call dad. Madhu says no. Sandhya says I will listen to Honey. Honey says Sandhya is smart, sit there and watch tv. Honey messages Happy that everything is fine at home. Happy says nothing is fine here, I will tell Rocky. She hears Kumar asking his men to come and detonate the bomb, the minister is here. She gets shocked. She goes to talk to Rocky. Minister says if you are seeing the security, I have nothing to worry. Kumar says so nice of you. He gets angry. Harleen is busy on call. Meenu says its done. Harleen scolds Meenu and asks her to clean the plates well. Rocky gets shocked and says it means Kumar is behind this. Happy says he is a terrorist, he has hidden bombs in all the props, he wants to kill minister, I heard him giving an order to someone.

Rocky saying I m understanding everything now, Kumar was the mastermind behind the school incident, he used Honey. He gets angry. Happy stops him and says we have to save the lives now, we have to fail Kumar’s mission, Jyoti lost her life because of this. He says Kumar has kept a man who will trigger the blast. Happy says minister has the bomb in her hand. She rushes. Harleen stops Kabir and Meenu. She asks them to finish their work and then go. Kabir hits on Harleen. He hides her inside the cupboard. Happy asks minister to come with her. Kumar asks Happy where is she going. Happy says minister will have a makeup touch up and come in few mins. Kumar agrees. Rocky asks the lady not to worry and just find Harleen.

He says we have to handle this situation. Minister asks why are we going out of the hotel. Happy says don’t panic, promise me, just go from here, there is danger on your life. Minister says Kumar said the security is good. Happy says he doesn’t know, just go. A man points gun at minister and shoots. Happy makes her away. She says I told you that your life is in danger, just go. Kumar talks to Kabir and Meenu. Rocky looks on and signs the lady. Kumar says the guard isn’t in my contact, go and find them, move. Rocky sees Kabir.

Happy says if Rocky’s life gets in danger then… I should go on. Rocky thinks Kumar won’t do the blast, he will make someone else do the blast, good thing is Happy isn’t here. Happy comes there. He asks why did you come back. She says no, I will stay here and help you. He says its not the time to argue. She says what if anything happens to you, you can’t lose the person you love, I want to live and die with you, we will see what happens. They see Kabir and Meenu. The man points gun at Rocky. Happy sees this and hits on the man’s head. Rocky turns and gets shocked. Happy catches Meenu. Kabir starts running. Rocky catches Kabir. Kumar comes there. Rocky beats Kabir and asks where is the remote, tell me. Kabir says I will kill everyone. The people run away. Rocky asks Kabir not to press the button. Kabir presses the button and says you all will be dying now.

Kumar says minister left the hotel despite my plans, Happy has done this. Meenu says today we will not fail. Kumar beats the guards. Happy beats Meenu. Meenu faints. Kumar picks the remote. He pushes Happy away. Rocky worries for Happy and holds her. Kumar says I will surely do the blast, none can stop this. Harleen shouts for help. She gets out of the cupboard. She says I won’t leave those people. Madhu says my Rocky maybe in danger, else he would have not asked me to stay at home, Harleen is with him, I will go and see, why did police come. Honey says you can’t go out, swear on me, don’t go. She gets angry. Kumar scolds Happy.

He says you think you are very smart, my motive is good, I had many hopes from Rocky, I felt I will involve you in my mission but you had to go against me, you think you are a hero, this drugs poison won’t end like this, I m working to end this drug racket, this minister funds all the drugs dealing, you came in between, you saved the minister, but this bomb explosion will reach the ministry, minister will lose, we will win. Happy throws something at his hand. Rocky picks the remote. He stops the bombs on time. Harleen comes and looks on shocked. Kumar gets arrested.