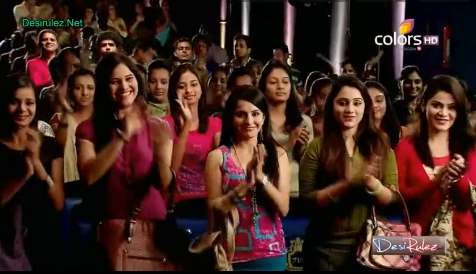 Location: Udaipur management university
The director calls on Jagdish giving everyone an introduction about his background and about his medical achievements. Jagdish comes on the podium and says that he isnt a very good orator, but would try it for them today. He tells how medical management is very different in villages , as they are very conservative and shy, and wont open up, until they develop a personal relation with them, instead of treating them as diseased patients and thats the reason they have been able to install a modern health care in the hospital of jaitsar. He goes on to present a Powerpoint Presentation about the same. Collegers sitting there, are reminded how jagdish had been in a scuffle with them, for sanchi and are very upset. He says that he would be very happy if people work in the villages, be it any field or company. and that they should forget the differneces between any kind of discrimination, and should focus on the unbderprevileged section of the society. All clap at his wonderful discourse, while sanchi gazes at him.

Later, sanchi tells him how he has become a sensation in the college, and she has heard a thunderous applause after such a long timne, for someone who proclaimed himself to be very nervous. He says that he also didnt know how that happened. When the girls gather asking for his autograph, Jagdish says that he isnt a celebrity. The girls say that they are considering him one, as because of them, they have been enlightened about their responsibilities towards the villagers. Those same college boys intentionally run by him, and then apologize half heartedly. Sanchi gets angry but jagsidh asks her not to bother. the girls also invite him to a social, later in the evening. Jagdish denies saying that he has work, and has to leave tonight, despite their insistence. sanchi says that if there are emergencies, then they wont stop him, but if thats not the case, then he should stay back, as this wouldnt be repeated that so many girls are requesting him to stay back. jagdish smile and agrees, making sanchi very happy.

Location: Udaipur
On the bike, anandi asks shiv why did he take a break today, and go out. Shiv, in a poetic way, says that he wanted alone time, which isnt possible in the house, hence the outing. Thney stop at the chatwala, who recognises him, and addresses him as collector sahab, but shiv says that he should address him by him name, just like he used to d when shiv was in college. As the chat wala goes on to give snacks to anandi, as this is the first time, he met shiv’s wife, shiv goes on to tell the story and the very old connection of theirs with the cchatwala. shiv goes on to tell his story, and finds that anandi is silently gazing at him. He asks what is she thinking. Anandi says that she knows why he came here today, as he tried to cheer her up, after she’s been down lately. Shiv says that it maybe but the more important question is that whether he succeeded. Ananadi is happily eating away from shiv’s hand, while they gaze at each other.

Location: Udaipur haveli
All the family, all and especially dadaji are enjoying the snacks that they got from the Chatwala. While they are all chatting away and enjoying, sanchi comes and is asked about jagdish’s lecture. Sanchi tells what a thunderous applause jagiya received. Sanchi goes on to gloat about jagiya, also saying that she never knew that jagiya was such a nice man, and is very different from what she had heard about him, and she feels that noone had ever realised or praised or given any consideration to his goodness. Shiv and anandi grow serious. While all are happy for sanchi, shiv and anandi are sombre. As mahi jokes about her becoming the star, due to jagiya, she says that every ounce of respect that jagiya got, was on his capability. Seeing her so excited about her interaction with jagiya, shiv is particularly tensed. sanchi says that the respect he got, he deserves, and being so cool and humble, that he doesnt gloat about having the best hospital care in jaitsar. she turns to anandi and says that she needs to thank her. when anandi asks why, she says that because of her, she met jagdish. Shiv and anandi are very tensed hearing this, at her changed tone of voice. As she leaves to very excitedly get ready for the social, while all are happy, shiv and anandi are concerned.

Location: Udaipur Haveli
Anandi and shiv discuss that they should get jagiya somewhere, now that that he is in Udaipur. anandi says that sanchi is taking care of him, and therefore she shouldnt bother in her matters, and last time too, she had looked after jagdish, when they had gone on their honeymoon. shiv says that if they dont call jagdish, then they would feel that they are still angry about urmi’s talks. They decides to call jagdish. jagiya picks up, and shiv says that he’s happy to know that jagiya is in jaipur, and that he should pay a visit home. Jagdish says that he doesnt have time, or else he definitely would have come. Shiv congratulates on his discourse and says that he should be happy as he is a star in the college. He gives the phone to anandi for talking. Anandi also congratulates him for his success. Jagdish hesitatingly asks her if everything is alright at hom. Ananadi asures that its okay. He says that he knows how bad she must have felt, especially after she was so happy after her honeym,oon, and then goes silent….anandi says that she has work, and therefore cancels the call.

Anandi goes to sanchi, and gives her milkshake which Choti maa gave to her to drink before she leaves. Ananadi looks at the one shoulder dress, and asks if she would wear this at her college function. Sanchi says that she’s not foolish and would team it with a skirt and coat. Sanchi says that she shouldnt unnecessarily bother for her, as its a social and not a function, where boys and girls dance togerther and enjoy. Anandi says that she should be cautious, more so now, as ira isnt here. Sanchi says that her mother isnt here, not for her, but because she is angry at anandi. She rudely asks her to leave, so that she may change. anandi is hurt and leaves.

Anandi gives dadaji, his tea, while he’s busy gardening. He comments that she should have been in the army, for being so punctual about everything. He further goes on to lecture her about how she would be very useful in the army. Sanchi comes and asks Anandi how is she looking and anandi says that she indeed is looking very beautiful. When dadaji asks her to enjoy, as well as take care of jagdish, Sanchi says that she would take very good care of Jagdish, startling anandi.

Location: Jagdish’s hotel in Udaipur
jagdish receives a pracel from an anonymous sender. He opens it to find a beautiful coat, and a note from sanchi that said, thanks for everything, and a small gift for him, and if he like sit, he should wear it in the evening. jagdish is overwhelmed.

Location: Jaitsar haveli
While mannu is playing, Ganga is revising. She talks to mannu about the same. Dadisa comes in and says that she would hasten his education process so much so, that he would become a doctor rightaway. Dadisa blesses her to read and prosper, and leaves. They have a good mother- son time.

Location: The university’s social
All are dancing and enjoying in the social. Jagdish enters, wearing sanchi’s gift, and goes over to the girls who had invited him over. He asks for sanchi. The girls comment on how he is looking very handsome. Those same notorious boys come over and start taunting jagdish, that now they also want understand what sanchi saw in him, and want his autograph. The girls ask them to stop as he’s their guest. They again tease him for being a ladies’ specialist and go off. The girls apologise for this indecency, and are told not to do this for them. Jagdish sees sanchi in her beautiful outfit, wiothout the jacket and is mesmerised. the boys too look on leeringly. The girls are surprised to see sanchi liekt his, while sanchi gives jagdish a compliment that he’s looking very good. She teases him to give a compliment as to how she’s looking. Jagdish says that he shouldn t comment as everyone has their ownh choice. Sanchi asks him to still tell her how is she looking in this dress. sanchi insists that she needs to listen. jagdish says that he isnt against western clothes and always liked them like this, but now its his personal opinion, that indian girls look best in Indian dresses. Sanchi says that she would just go and change, as this party is to be enjoyed with him. Jagdish says that he earlier only told hger that choices may vary from person to person. And the fact that it doesnt feel good to him, shouldnt bother her. Sanchi says it matters for her. Jagdish says that she shouldnt bother at all, and thats what he wants. Sanchi says that then she would just what he wants. They begin to enjoy the social.

Location: Udaipur haveli
Anandi says that she needs to talk to him, if he isnt very busy. shiv immediately lends an ear to what she has to say. Ananadi hesitatingly presents her discomfort with sanchi, despite her efforts, and whenever she tries to do something, she goes wrong, and something terrible happens, which makes her doubt herself. Shiv says that he isnt saying this because she’s his wife, but because he truly believes that she cant be wrong. Shiv says that he bevaviour, her immaturity and her age is a factor for such kind of impulsive, unpredictable and rash behaviour. Anandi agrees and asks how does she do everything right with sanchi. Shiv asks her to be patient and give time to her. Shiv says that soon everything would be alright with sanchi, and she would give anandi the respect that she would give to her elder sister, if she had one. Ananadi thinsk that she’s very impatient and fidgety, and hopes that sanchi is alright and prays to the Lord to be with her.