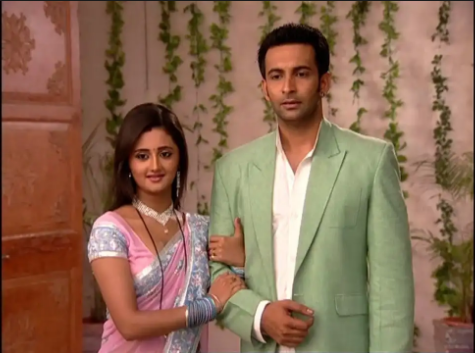 Mr.Rathod telling all about how he came to marry Tapasya and she knows it all on which all r shocked and Nani even blasts Mr.Rathod for all this nonsense ;Mai,Daddaji and Umed r not able to believe it while Ichha tells Mr.Rathod that she will first ask Tappu about it before believing any of his words ..

All enter the house including Mr.Rathod to ask Tappu about the whole drama but she is nowhere to b found ;Everyone again asks Mr.Rathod to tell them the entire story when Mr.Rathod gets the flashes of his initial encounters with Tappu and how it all happened but then he tells everyone that its better they hear it all from Tappu’s mouth only ..

Tappu then puts down the phone and turns back only to see Ichha standing there and hearing it all ;Ichha is shocked to know that Tappu is carrying Mr.Rathod’s child ;Ichha tells Tappu that “Everytime I wanted to trust u ,you kept proving me wrong and today again the same happened ..now u tell me who is a bigger culprit ?You or Saanchi ?Tell me whether I should fight to bail out Veer or I should fight to tell your truth to everyone ?Tell me whom should I expose now ?Satya-Saanchi or You ?” ;Tappu has no answer and keeps crying when Ichha asks Tappu to go and marry Mr.Rathod since its his child and he has come to take her with full respect ; But Tappu refuses to do so and asks Ichha to listen to her at least once and then she will do whatever she(Ichha) asks her to do ;Tappu then tells Ichha all about her and Mr.Rathod’s relationship and how she was not in her senses that time when Mr.Rathod took her advantage ;Tappu also tells Ichha about how she was all alone that time when she was kicked out of this house and how she had to face all the difficulties that time ;

Tappu then goes on to say that Mr.Rathod does not love her but just wants this baby and so he is doing all this ;Hearing this Ichha tells Tappu that Mr.Rathod is afterall the father of this child and today if he has come to take her with so much respect then mayb he has started loving her and so she should just give it a chance ;But Tappu is not ready to go when Ichha tells Tappu that a mother’s thinking often affects the child and so she should not repeat the same mistakes that she did earlier in Veer’s love because it will only affect her child’s future and as a mother its her responsibility to make sure that her child’s future is not affected and so its better if she herself goes down and tells the truth to all ;But Tappu is adamant and refuses to go down on which Ichha tells Tappu that if she doesn’t go down then.

Mr.Rathod will himself tell the truth to all which will b even worse and so she should herself do it ;Hearing this Tappu tells Ichha that she cannot marry Mr.Rathod because she still loves