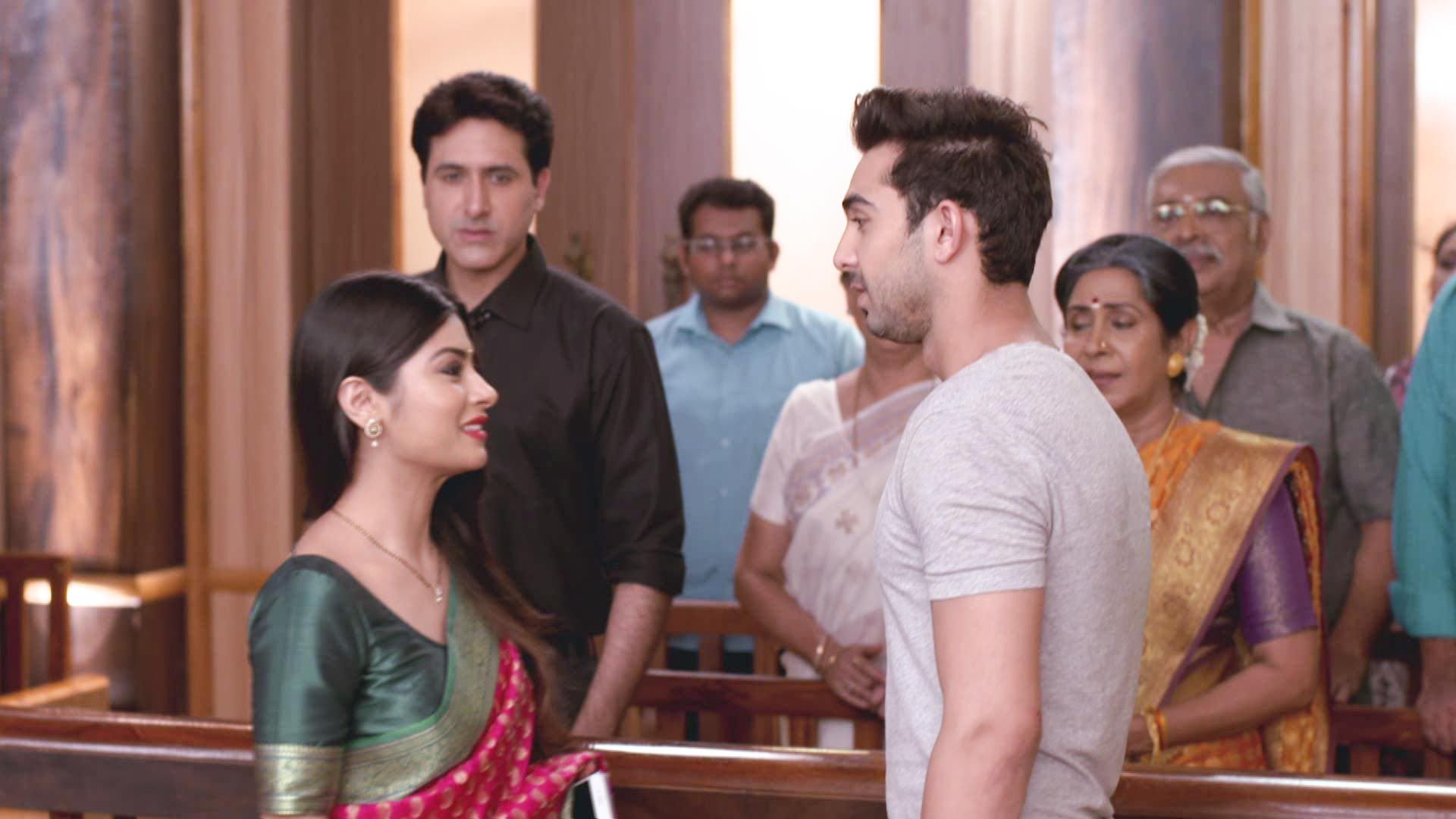 16th January Wednesday Update On This Is Love

The Episode starts with Adi hugging Aaliya and asking her never to leave him. She says I will never leave you, I know my Adi is not a bad person, I trust you. She asks him to have food first. He says you are saying as if you had food at home, did you have food. Tu safar mera……plays…. They feed food to each other. Meeting time gets over. She says we will meet tomorrow in court. Adi goes away.

Its morning, Raman wakes up. He says maybe Ishita did not sleep all night. She gets tea and says I have to go for some imp work, there is court case, meet me there, get ready. She goes. He says its imp court case, don’t know what’s going on in her mind. Ishita meets Adi. He asks did you find that man. She signs no. He says nothing can happen now, if we don’t get him….
She says everything is not finished, we all are worried, we know we will get you out. He says no lawyer is ready to take our case. She says there is one way. She tells him. She asks are you with me. He says but I… She says yes.

At court, Raman says we did not get a lawyer till now. Ishita asks him not to worry. He says judge will give us next date, what else will happen. Adi is brought by police. Judge asks prosecution to keep the case. He asks for defense lawyer. Raman says we have to wait till Mihika gets lawyer. Adi says I will fight my own case. Ishita says as per the law, accused can fight his case when no lawyer takes his case, Adi is helpless to fight his case. Judge says we will continue after the break.

Mani says Adi does not know about any laws. Ishita says I will help him, we have to take proceedings ahead till we get some help. Raman says we can do this till Mihika’s lawyer comes. Mani says Ishu does not know things, it can go wrong. A man comes and says are you Adi’s mum Ishita Bhalla. She says yes. He says I m the person whom you were finding, I saw you on tv, I went for some urgent work yesterday and could not come, I will give statement. Raman asks were you there at annulment time. The man says yes, Adi was not alone, there was a girl with him. Aaliya shows Roshni’s pic. The man says yes, she was the one. Raman thanks him. The man says Adi helped me and gave me money, I fought my case by hiring a lawyer. Ishita says we should tell this to Adi.

Ashok shouts on call. He says Adi is fighting his own case. Baweja says accused can fight his case, but he has no proof. Ashok says Ishita will get proof anyhow and fight the case. Ishita says let us meet Adi, we have to brief him about case. Inspector asks her to wait. She thinks if Adi can manage. Raman says he is my son, he will manage.

Romi gets the lawyer. Raman says thanks for coming. Lawyer says I had to come, Mihika is my friend, we will discuss the case. Lawyer takes Adi’s case and tells judge that he will be fighting the case. He asks the man did he meet Adi. The man says yes, I met Adi in lawyer’s office, he helped me with money so that I can hire a good lawyer, this man can’t do wrong with anyone. Prosecution lawyer asks what’s proof he is saying right. The man says I have the receipt, I got this when I met the lawyer. Adi’s lawyer says this receipt has time and date, Adi has also gone there. Prosecution lawyer asks does Adi has that same slip. Adi says I was in tension that day and threw the slip. His lawyer says when visitor goes there, two slips are given, if Adi went there, then the counter receipt will be with lawyer, I want permission to check at lawyer’s office. Judge says okay, police will check the case and report back. Lawyer says it will be unfair to keep Adi in jail till missing links are founds, I request you to grant him bail. Judge says Aditya Bhalla gets the bail, he has come for court proceeding, his first wife Roshni has to come in next hearing. Everyone smile. Aaliya hugs Adi.

Ashok gets informed. He throws his phone. He says I told Baweja to keep an eye on Adi, Adi got bail, no…. He calls Gagan. He asks where are you, you don’t answer call, are you in Khandpur. Gagan says yes. Ashok says Roshni will be there, keep an eye on her, court has sent summon for her, you don’t let any Bhalla member meet her. Gagan says I understand.

Ruhi ties the Mauli thread to Adi’s hand. Adi apologizes. She asks him to forget it now. Adi says Dadi, forgive me, we gave you much tension. Dadi says it happened by situation, you were the victim, I m sure Mani will forgive you, the way you faced this problem, always face problems together. Dadi blesses them.

Aaliya gives clothes to Adi. She says sorry, I forgot to ask about your clothes, I will switch on geyser for your bath. He says you don’t need to do all this. She says you have gone through lot, I can do this for you. He says sorry, you had to come court because of me, people go on honeymoon after marriage, your mehendi, bangles, mangalsutra are special, I spoiled everything, sorry. She says you did not spoil anything, just keep smiling, I want my Adi happy. She cries and says we can go on honeymoon later. He says you know I m luckiest man of the world, because my wife loves me a lot, she is much strong. They hug.

Raman thanks Mihika and says your friend helped a lot, Roshni did wrong, we did a lot for her, Adi’s life was getting ruined, we did not identify her well. Romi says I told you she is fraud. Ishita says she lied, but why did she go to annul marriage, she was happy after filling IAS form, she would not wish to go back to Khandpur. Raman asks her to accept she did mistake in knowing Roshni. Mr. Bhalla says stop arguing now, Adi has come back, Roshni cheated me, we don’t know why and how, just wish she tells truth in court. Raman says I don’t want to hear her name. Mr. Bhalla asks them to have food.

Ishita asks Neelu to give milk to Adi and Ruhi, I have soaked chana as well. Neelu says I have to tell something about Roshni, everyone is angry on her, she is in trouble, that day when her mum and Gagan came, I was standing close, I saw seen her mum saying Rabjot.

The Episode starts with Ishita telling Raman that Neelu has heard Roshni’s mum taking Prabjot’s name, something is related to it, so Roshni changed her side. Raman says I have no interest to know why she did this, she has sent Adi to jail, you still care for him. She says there is something related to Prabjot, maybe Roshni is in problem. He asks her not to take her name again. She says we should find out, shall I ask Adi. He says keep Adi and Aaliya away, I don’t care about anything, lawyer will ask Roshni in court, Gagan is a goon, I m warning you, you will be away from all this. He goes. Ishita says how shall I go out, I have to find who is Prabjot, don’t know how is Roshni, something is wrong.

Its morning, Gagan comes to Roshni’s mum. He asks about Roshni. She says she is fine,
she is resting. He asks did anyone try to talk to her. She says no, they all will be hating her. He says don’t trust them, don’t let them meet Roshni, if anything goes wrong see what I can do. She asks him not to worry. Ishita, Mihika and Bala are on the way. Mihika says all costumes are arranged. Bala says I have seen Haryanvi films all night, and learnt Haryanvi also. They laugh. Mihika says I m not sure about this, should we do this. Ishita says you have beaten up people at station, when did you get scared. Bala says I m counting on you. Mihika says I m still tigress, but I m not sure of this. Bala asks her not to take tension, he is with her. They laugh. Ishita says sorry to drag you in this, Raman asked me not to get into this, so I asked you two. She stops the car and says Khandpur is 5 kms away, there is dhaba in front, just go and change clothes, this is number of the guest house, call me there.

Mrs. Bhalla asks Gauri to get breakfast. She says Neelu went for holidays, so Gauri is managing work. Shagun says we wanted to take Aaliya for pagphere rasam. Aaliya says I don’t think I should go now. Shagun asks her to come for few days. Adi goes. Aaliya says Adi is much stressed out, I should not leave him alone, I should be with him in bad time. Mani agrees. Mrs. Bhalla says take Aaliya late. Shagun says we will take Adi along, it will be change for him. Mr. Bhalla likes the idea. Aaliya says I will talk to Adi. Adi gets her bags and asks her to go for rassam. They ask Aaliya to pack Adi’s bag. Adi and Aaliya go. Mani asks about Raman and Ishita.

Raman says I will beat Gagan. Bala says we can’t take risk, Roshni and her sister’s lives are in risk, we have to go back. Raman asks them to connect bluetooth and be in touch, be careful. They leave. Mrs. Bhalla asks Mr. Bhalla why did he send Adi with Aaliya. He says I have sent as there is tension at home. He gives her medicine. He says they all are in tension, till this matter gets solved, atleast Adi and Aaliya will spend time there, they are newly weds. She says you are saying right, I understand, I wish Ishita and Raman get Roshni, and she tells truth in court.

Mihika asks why did we come to find Prabjot here. Bala says we can get Roshni here, she can tell us where Gagan kept Prabjot. Raman says Mihika and Bala took big risk, don’t know can they find Roshni’s sister or not. Mihika calls him and says we reached Roshni’s house, we can get Roshni here and know about Prabjot. He asks her to be careful. He prays for them. Ishita calls him. He asks did you reach home, foolish, why did you send Bala and Mihika, you know Gagan is dangerous, don’t leave from house.

Bala and Mihika knock the door. Roshni’s mum says you came again. Mihika says there is big problem. Bala says all people here are thieves, a man has stolen my wallet, we have no money, help us, my family member will come, I can stay out, but I have to take care of her, let us sit in house for some time. Mihika says please do us a favor. Roshni’s mum agrees and gets them in. Mihika thanks her.