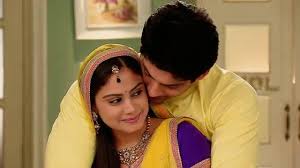 Brijesh and Rasika coming to the Shiv’s office. Saachi tells Anandi that she will go now. She assures Anandi that they are with Shiv. Anandi says, I am sure that he will prove innocent soon. Saachi says, yes. Brijesh takes Narendra out of the car and puts kerosene on him. He says, save if you can. Narendra struggles to talk. Rasika looks on. Brijesh opens his mouth and hands. Narendra starts running. Brijesh and Rasika follow him. Brijesh lights Narendra’s body. Narendra runs inside the office and shouts for help. Shiv sprinkles water on Narendra. Narendra apologizes. Rasika asks Shiv to take him to the hospital. Shiv calls the guards.

Brijesh hides and thinks everything is left on Rasika. Shiv calls Anandi and tells her that he is taking Narendra to the hospital. Anandi is shocked. She says, she will reach there. Jagya tells Ganga that he didn’t get scared before. He says, he was scared when he come to the village. He apologizes to her for not checking his phone. Ganga says, you are doing your duty. I couldn’t stop myself from going there. Jagya asks her to wait for him next time. Ganga promises him. They hug.

Shamal tells that Jaitsar have given him respect, love and Jagya. He names Jaitsar as Jaitsar Ayurved. He requests Jagya to inaugurate the Jaitsar Ayurved. Jagya does the inauguration. Everyone claps for him. Shamal shows his office to Jagya. He tells Jagya that he will hire handicapped people when his factory starts rolling. Dadisaa prays for his well being. Shamal says, I learnt it from you. He acts sweet. Basant says, you will get success.

Jagya gets a call. He tells Dadisaa that he have to go. Shamal says, you shall not leave food midway. Jagya says, but. Shamal tells about the poor people’s hunger. Jagya gets impressed. Basant asks him to eat the food. Jagya agrees.

Shiv is sitting in the hospital with anandi. Rasika tells the police that she tried to stop Narendra, but in vain. She says, he doused himself with kerosene and lit the fire for getting justice for her. She cries and acts innocent. Doctor comes and tells them that Narendra is no more. Rasika gets relieved while Shiv stands in shock. Rasika thinks thank god, Narendra died.

Rasika acts as she loves Narendra. She cries. She holds Shiv’s collar and says you have killed my husband. He couldn’t do anything. I am paying for your lust. I lost my husband. Inspector asks her to leave Shiv. She says, I won’t leave him. Anandi intervenes. Narendra’s parents come there. Rasika cries. They are shocked. She tells them that they won’t cry and will fight for justice. She tells his parents that Shiv killed Narendra. Doctor asks her not to shout.

Narendra’s parents go near Shiv and curses Shiv. His father asks the Inspector to arrests Shiv. Inspector says, they will do the needful and the court will decide. Rasika says, he forced my husband to commit suicide. His mom asks, why did you kill my son? Shiv is speechless and shocked. Narendra’s parents cries. Anandi asks Shiv to come. They leave.

Ganga talks with the patient. One old Woman praises Ganga and remembers Jagya. Ganga tells her that Jagya will come for rounds. Ward boy comes and tells her that a girl has come in a bad condition. Ganga goes to see the girl. Daddu gets worried for Shiv. Subhadra says, God have to do the miracle else…..Anandi and Shiv come back home. Shiv sits in shock. Meenu asks about Narendra. Anandi says, he is no more. Everyone get shocked. Anoop says, what? Anandi says, Doctor couldn’t save him.

Shiv telling his family that he didn’t have the guts to stand infront of Narendra’s parents. Anandi tells everyone that Rasika blamed Shiv for Narendra’s death. Daddu asks, did she say this? He asks Shiv not to feel guilty. He asks, did she has any proof against you. Alok says, Shiv will be heard. People know you. Anoop says, even chief minister knows that you are truthful. Subhadra tells that she had a doubt on Rasika when she entered their house. She says, she will ruin all of us. Daddu asks her to mind her tongue. Subhadra says, I am saying the right thing. CONTINUE READING NEXT PAGE 2 BELOW