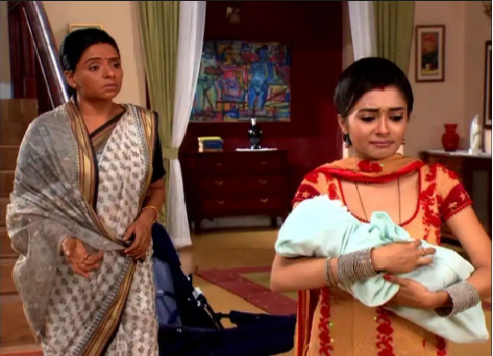 Divya begs Rathod for even a hint of Taps and the child. Rathod makes it clear to her that even if he had news of them, he would not let them know. He tells Divya that Taps had a choice to go to her house, and there must be a reason she decided not to.

At the Mukherjee house, Avinash brings Ichcha to Mr. M’s room. She asks if he is going in with her, but he says that Mr. M will have eyes only for his bahu and grandchild. When Ichcha enters, Mr. M says he is sorry to her. Avinash watches this from outside the room.  Later, Ichcha and Ammo are in their room when Ichcha notices a shadow by the door. She nears it and Avinash enters and thanks Ichcha for all her help, and Mr. M is a lot better now. Ammo talks of leaving, and Avi says that the doctor has said that Mr. M will not live much longer. Ammo is confused and questions him on his changing descriptions of Mr. M’s health.

Either way, Ichcha is convinced and decides to stay longer. She asks Avi for more info on the family so she will know what to say if asked anything. He explains that Mr. M had a son and a daughter. The daughter and her husband died in an accident. His son married out of caste and was shunned by the father forever. Later, the son also died in an accident, leaving behind a wife and child. Ichcha praises Avi for all that he is doing for his master. He explains that he was an orphan when Mr. M took care of him like a son. He leaves and Ichcha tells Ammo how these days you rarely see someone like Avi. Ammo replies that people are not always what they seem to be.

Meanwhile, Rathod sends out a search party to find the child.

Ichcha goes to the library and when she opens one of the books, a picture of Mr. M and wife w/ Avi falls out. The caption reads: Mum, Dad, and I. Ichcha is confused and is questioned by the Kaka who comes there asking her what she is doing. In return she asks abt the picture. Before he can answer, Avi comes there and asks them what they were doing at this time at night. Ichcha shows him the pic and he explains that Mr. M and wife were like parents to him. He escorts Ichcha back to her room, giving the Kaka a mean look. He warns Ichcha to not go searching around at night. Later, when singing a lullabye to the baby in her room, Ichcha realizes she is being watched. She leaves the room and finds a small kid hiding behind the sofa in the main room. She learns his name is Kanha, but he runs away before she can ask anything more. She wonders why Avi didn’t mention the kid before.

In her room, Taps cries and screams for her child. Rathod comforts her. Later, Rathod’s men come with the kidnapper who stole the child. Taps recognizes the man and the necklace he had stolen from the baby. Rathod asks him where the child is. The man replies that he left it somewhere on the highway. Rathod tells Taps to go upstairs. He then beats up the guy black and blue, finally demanding his men to throw the kidnapper on the same highway. Taps sees all this from upstairs.