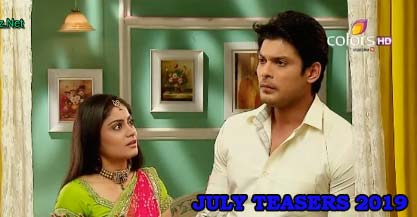 Monday 1 July 2019
Anandi tells everyone that Saachi wants to say something. Saachi tells everyone that she recalled everything and that guy was Saurabh. Alok asks, why didn’t tell us before? Saachi replies I was scared. I thought he loves me. She tells that he made the video of the crime. Everyone are shocked.

Saanchi breaks down and tells Anandi about Saurabh. Will Anandi tell the family? Anandi finds Saurabh and tells him that his video will be used against him in a rape charge. She also demands to see his phone to make sure that he has deleted the video. What will Saurabh do?

Saanchi tells the family everything that had happened with Saurabh. How will they react? The police arrive at Saurabh’s home and arrest him, leaving his parents devastated. What will his parents do?

The collector of Jaitsar meets Grandma Kalyani. Will she accept his request? The lawyer arrives to take a DNA test from Saurabh. What will he do?

Saurabh bribes the clerk at the lab to change the DNA test. Will he succeed? Court proceedings begin and Saanchi narrates the incident that had happened.

Saanchi goes to meet Saurabh at his house. Will this jeopardize her case? Saurabh’s brother Vivek shows the Judge evidence against Saurabh! Will his brother ever forgive him for standing with truth and going against his own brother?

Mannu starts breathing heavily, what could be wrong with him? Saanchi’s family forgive and stand by her, but will she be able to forgive herself after everything she has put them through?

Ganga asks Jagdish about Mannu’s blood report; will he tell her the truth? Ganga finds out the truth about the blood report, how will she react?

Ganga is shattered upon hearing that Mannu has cancer. Will they be able to help Mannu? Grandma and the family find out about Mannu’s condition. How will they react?

Monday 15 July 2019
Grandma Kalyani orders Bhairon and Bhasant to order whatever machines are needed for the hospital, so that Mannu doesn’t have to endure trips to Jaipur for his treatment. The women of the mansion overhear Nandu’s prayer and are moved with how selfless he is.

Jagdish and the family members are worried as the medicines don’t seem to be working on Mannu. Will he be okay? Gehna’s mother visits Gehna’s house and expresses her worries for her younger daughter Kanchan.

At Grandma Kalyani’s house, Gehna’s sister marriage gets fixed with Chatrabuj’s son Manish. Anandi finds Amol playing catch with Daddu instead of studying and scolds them both gently.

Grandma Kalyani invites Anandi for Gehna’s sister Kanchan’s marriage. Will Anandi attend the wedding and meet her family after such a long time? Alok tries to tell Anuj’s father about Saanchi’s incident, but is unable to do so as Anuj’s father misunderstands it as Alok’s concern about dowry.

Amol is accused of cheating in his exam. How will Anandi handle the situation? Grandma Kalyani is very upset about Mannu’s illness and decides not to celebrate Holi, but Ganga convinces her that it would be better if they celebrate it, especially since it is Bhairavi’s and Abhimanyu’s first Holi.

Monday 22 July 2019
Saanchi is worried as Anuj and his family haven’t been told about her incident yet. How will they react when they find out? At Shiv’s house, the entire family gets busy celebrating Holi, when Anuj and Vivek join them.

Grandma Kalyani refuses to give in to Ratan’s demands, but Jagdish points out that they are left with no choice as time is running out for Mannu. Anuj is unable to convince his parents about Saanchi and they refuse the marriage, believing whatever was written in the media.

Ratan Singh’s lawyer asks Jagya to sign on the papers. He says, you all shall not come to meet Mannu and will never file any legal case against Ratan Singh. Jagya looks shocked.

Anandi calls up grandma Kalyani to find out about Mannu’s health and also gives her the good news about Saanchi. Grandma Kalyani and the family bump into Ratan Singh at the hospital. How will they react to him?

Anandi tells Daddu that Suhasani has agreed to stay at Anandi bhavan, but wants to go to Mumbai once. Panditji takes out a date for Saachi and Vivek’s marriage. Ratan’s mom comes to take Mannu. Dadisaa says, Jagya asked you to take Mannu once he is fine.

Monday 29 July 2019
Bimla and Bhavar come to claim Mannu once again but Jagdish convinces them to let him stay a little longer, as he needs extra care after the operation. Ganga is distraught about having to give up Mannu and Jagdish tries to console her.

Everyone is delighted as Mannu is brought back to the mansion. How will they manage to say goodbye to him in a few days’ time? Suhasini gets an idea upon realizing that her son and daughter-in-law tried to cheat her. What is she going to do?

Vivek and Saachi are exchanging garlands. His parents come and says won’t you take our blessings. Ganga, Jagya, Ratan’s parents wait for Ratan. Ratan comes and looks at Mannu. Nandu prays to Lord. Read Next on August Teasers on young Love 2019.