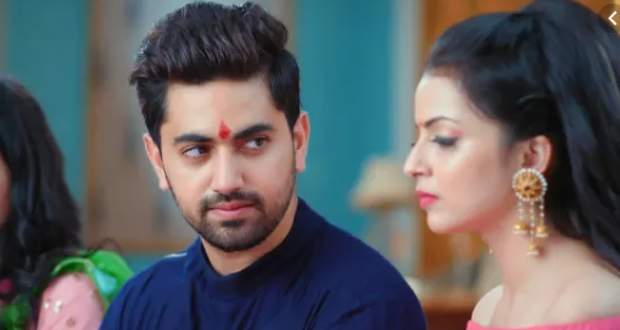 Pooja walks into Kabir’s room in the morning while he is sound asleep. She walks towards him and he holds her pallu in sleep. Pooja turning aside requests to leave it, but then turns back and sees his hand on pallu and frees it. Once Pooja leaves, Rani walks in and smears her hand on Kabir. Kabir nervously wakes up and asks what is she doing here. She says she came to wake him up as Suman aunty is calling him for breakfast. He walks away warning her not to enter her room and send a maid instead. Rani smirks thinking she will sleep in this room tonight with Kabir and fixes a hidden camera. Kabir walks to Anuradha and requests her to forgive Pooja and give her a chance. Anuradha says he is so kind hearted, so he cannot understand Pooja’s sins, she will not forgive Pooja.

Suman in kitchen yells in front of Chanda types that Kabir is in deep sorrows because of Pooja, he cannot understand Pooja’s tricks, she even used her mother to trap Kabir, etc. Chanda types asks if Kabir is really falling in Kabir’s love. Suman yells she will not let that happen. Pooja hears their conversation standing near door. Suman then serves breakfast to Kabir. Kabir says he is not hungry. Suman yells he has fallen in Pooja’s trap. Pooja walks to Kabir and informs Kabir that Ranjit with come with company documents and he should check them. Kabir says even she can do that. Pooja says she is going to to meet her friends and then will go to parlor, etc., so she is busy whole day. Once she leaves, Suman starts again. Kabir shouts he does not love Pooja and doesn’t care for her, why she is irritating her so much. Pooja hears their conversation. Kabir goes aside and cries why he loves Pooja so much now. Pooja also thinks same.

Kabir meets Ranjit and scolds him for lazing over phone. He then picks file to check, but then reminiscing Pooja’s words about going to to meet her friends and then will go to parlor, etc. angrily throws files and walks away. Ranjit picks files when Rani walks in and asks what are these files. Ranjit says Pooja is donating a big sum to orphanage, these are those files. He starts flirting with her, but she scolds him and walks away. Kabir returns and starts checking files when Suman enters with food and insists him to have food. Kabir says he is not a kid now, but seeing her emotional blackmail agrees to have food, orders Ranjit to go and have food from kitchen and rest in guest room for sometime.

Rani gets ready at 12 midnight. Anuradha asks where is she going at midnight. Rani says to her friend’s house. Anuradha asks to return soon. Rani walks into Kabir’s room and locks door from inside when power goes off. She hugs sleeping man thinking him as Kabir and says she will not defame him, she just wants to spend some quality time with him.

Ranji turns and says if she was so desperate then why did she scold him in the afternoon. Rani says she thought he is Kabir. Their drama continues. On the other side, Kabir sleeps on chair in home office when Pooja walks in and corrects files. Kabir wakes up. Pooja says she will take files to her room and complete them, tries to open door, but it is jammed. Kabir helps her open door.

Pooja walks into Kabir’s study room to check files and informs him that she will go and check them in her room. Kabir nods yes. Pooja tries to open door, but it is jammed. Kabir tries to open door and they both slip and fall. Their eyes strike and they feel nervous. Rani stuck in Kabir’s room with Ranjit fumes that she wanted to spend time with Kabir, but is stuck with Ranjit. Ranjit tries to impress her in vain. Chanda types thinks of checking and opens door. Rani walks out of room. Chanda types sees that and Ranjit inside room and asks what was she doing in Kabir’s room with Ranjit.

Rani says she came here to get candle and saw Ranjit trying to hide here fearing Kabir. Chanda types asks if she is telling truth. Rani yells at her and says Kabir must be in study room with Pooja, let us go and check. Chanda types opens study room and sees Kabir sitting on chair studying file and asks if she needs anything. Chanda types says Rani provoked her to check on him. Rani lies it is Chanda’s plan and drags Chanda from there. Once they leave, Pooja comes out of her hiding behind the door.

Kabir walks to Pooja’s room with bed tea. Pooja is surprised to see that. Kabir says he is waiting for her to wake up since long and feeds tea from his hands. Pooja wakes up and realizes it was her dream. After sometime, Pooja calls orphanage representative and hands him over money bag. Jay questions her and warns that wealth belongs to even them and he cannot spend a penny without their permission. Kabir enters and says he gave her permission.

Suman yells Pooja is trying to loot money before divorce and make them bankrupt. Kabir stops her and sends orphanage representative. Suman continues yelling at Pooja and Kabir takes Pooja’s side. Another man enters and informs them that Pooja handed over papers in suitcase instead of money. Pooja asks how can it be, she gave money. Rani smirks thinking she sent her aide and changed suitcase. Suman yells she told already it is all Pooja’s plan. Man walks away saying Pooja has helped them a lot in the past, but they cannot associate with her anymore. Pooja tries to convince everyone that she is innocent, but Suman continues yelling.

Anuradha also verbally abuses and slaps her. Suman then walks into Kabir’s room and says she told him that Pooja is untrustable and asks him to do whatever she says from hereon; they need to get back their money somehow. Kabir says he know how to get it back. He walks into Pooja’s room where she asks if he thinks like others that she stole money. Kabir says he trusts her more than herself and even if she tells him, he will not believe that she can steal money; he asks her not to try hard to prove herself innocent as nobody will trust her until she proves it practically.