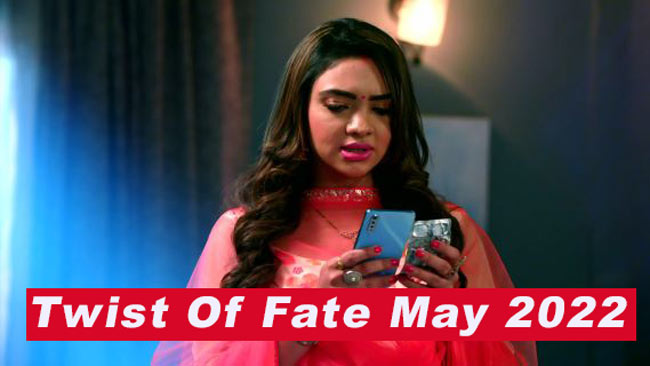 Twist of Fate May 2022 Teasers

The inspector asks for Ranbeer and Rhea’s marriage certificate. Alia shares a plan with Pallavi to make Prachi so miserable that she would leave the house voluntarily. Pallavi asks her to call Prachi.

After Pallavi douses Prachi’s vermilion in water, Vikram apologises to Prachi and gives a warning to Pallavi. Ranbeer gives Prachi’s number to the police.

Prachi vows to wear vermilion only if Ranbeer puts it on her in Pallavi’s presence. She arrives at the police station with members of a women’s rights NGO and claims to be Ranbeer’s legal wife.

The police officer threatens to arrest Ranbeer and his family. Prachi establishes the legitimacy of her marriage with Ranbeer. At Pallavi’s urging, Ranbeer applies the vermilion on Prachi’s forehead.

Prachi gets Rhea arrested and Rhea vows to exact revenge from her soon. Ranbeer profusely apologises to Prachi in front of the NGO’s women. Later, Pallavi condemns Prachi for her actions.

Ranbeer learns that Pallavi had washed off Prachi’s vermilion. Rhea gets bail and returns to the Kohli house. Later, she follows Prachi to the maternity hospital, while Pallavi confronts Ranbeer.

Rhea spies on Prachi and the doctor and overhears their conversation. Sahana saves the situation by stating that she is the one who is pregnant. However, Rhea becomes suspicious of Prachi.

Rhea spies on Prachi and the doctor and overhears their conversation. Sahana saves the situation by stating that she is the one who is pregnant. However, Rhea becomes suspicious of Prachi.

Daljeet, Ranbeer, Prachi and Sahana make plans for Vikram and Pallavi’s anniversary party. Rhea assumes that Prachi is pregnant with Siddharth’s baby and decides to bring the truth before the Kohlis.

Rhea spikes Prachi’s juice with Alia’s help and calls her doctor to quell her suspicion of Prachi’s pregnancy. Later, Alia asks Rhea to accompany her to the women’s rights NGO.

Rhea vents to the NGO’s women about Prachi’s atrocities and falsely accuses her of being pregnant with an illegitimate child. The family celebrates Vikram and Pallavi’s wedding anniversary.

Rhea eagerly awaits Prachi’s pregnancy reports. Vikram sneaks away from the celebration and speaks to someone over the phone. Pallavi and Alia malign Prachi’s reputation in front of the NGO members.

Rhea spots Siddharth and Prachi talking to each other and clicks their pictures as proof of Prachi’s infidelity. A series of events cause Prachi’s pregnancy reports to get misplaced.

Daljeet and Sahana suspect that Rhea is onto something. Pallavi and Vikram quarrel about Rhea. The doctor confirms Prachi’s pregnancy to Rhea, and she asks the doctor to come over.