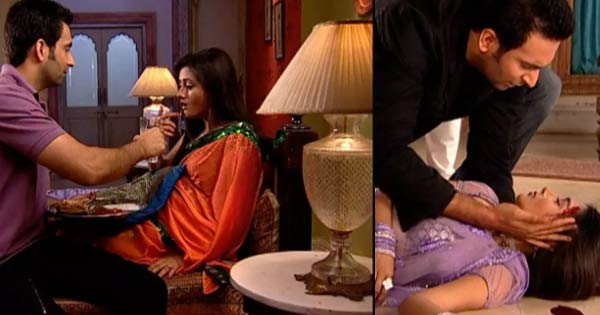 The accident reminds Jogi Thakur of Ichha’s father’s accident. Veer assures Sanchi that she will regain her eyesight soon. Rohini takes away Divya’s jewellery and places it in Damini’s room.

Satya gets flowers for Sanchi and helps her calm down by singing a song for her. Gunwanti notices Vansh’s clothes stashed in the cupboard by Tapasya. Veer saves Sanchi from falling off the roof.

Sumitra tries to calm Gunwanti down, but the latter declares that she would never forgive Tapasya. Pushkar and Rohini try prove Damini a thief, but Jogi Thakur’s trust on Damini spoils their plan.

Satya wins over the hearts of the elders of the family. Kasha shares his concern with Satya moving in with them. Ichha shares her life story to with Satya and Sanchi.

Tapasya reveals to Satya and Sanchi about her being pregnant with Veer’s child. Jogi Thakur tricks Rohini into admitting her crime. Tapasya gets a call from a stranger who claims to know her secret.

Sumitra alerts Tapasya about everyone favouring Ichha because of Satya and Sanchi. Jogi Thakur hands over Lord Krishna’s idol to Damini instead of Rohini. Pushkar disses Damini.

Tilakdhari sees Vansh in Satya as he plays a game of chess with him. Tapasya fakes calling Veer in order to make Ichha jealous. Damini feels ashamed as she is blamed of trying to take Divya’s place.

It’s Ichha and Veer’s first Valentine’s Day and they are excited about it. Tapasya is worried about Sanchi and Satya’s admiration of Ichha which can create problems for her.

Tapasya goes to attend a party in place of Ichha hoping to meet Veer but bumps into Raghuvendra. After she returns home, she finds Ichha and Veer celebrating their Valentine’s Day.

Satya startles Gunwanti by telling her that he likes chickpea flour sweets. Ichha gives him Veer’s car to drive to office unaware about the failed brakes and, Satya meets with a minor accident.

Tapasya gets a call from a stranger who reminds her of some big secret of hers that she’s been hiding. Veer is informed that someone intentionally tempered his car to hurt him.

Damini visits Ichha and notices Tapasya caring for her unborn baby. On the pretext of baby’s movements inside her stomach, Tapasya lures Veer into coming close to her.

Worried about Pushkar having doubts about her and Jogi’s relation, Damini sends Rohini to serve Jogi his breakfast. Sumitra indirectly fills Gunwanti’s ears against Ichha.

Satya prepares special food in the kitchen. Sanchi is standing and Veer hugs her from behind mistaking her for Ichha. Sanchi gets embarrassed and Veer apologises to her. 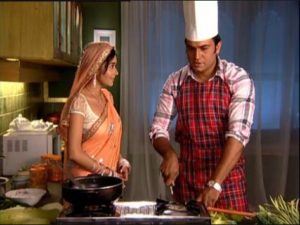 An unknown person calls Tapasya and tells her that he knows her secret. Gunwanti humiliates Tapasya as she came to know that the baby is not Veer’s. Veer throws her out of the house.

Tapasya wakes up and realises that it was a nightmare. Gunwanti decides to arrange a ritual for Tapasya’s unborn baby. Umed disagrees with her as Tapasya isn’t Veer’s wife.

Gunwanti asks Veer to participate in the ritual for the baby. Tapasya follows someone suspicious and goes outside of the mansion. She doesn’t find anyone and when she returns, the door is locked

Satya finds Tapasya lying on the floor and brings her inside. Everyone gets shocked to see her in such state and call the doctor. Tapasya tells them everything and doctor advises her to take rest.

Satya burns the evidence and discuss his plan with Sanchi to destroy Bundela family. Gunwanti asks Ichha to convince Veer to sit with Tapasya in the ritual for their baby.

Veer agrees to sit with Tapasya in the ritual. Tapasya gets happy to adorn herself as a bride while everyone prepares for the ritual. Jogi’s family comes to celebrate the baby shower ceremony.

Veer gets up and asks Ichha to join the ritual or else he’ll leave it. Tapasya gets upset and tries to leave but Jogi convince her to continue the ritual. Someone throws a rat in Tapasya’s plate.

Baldev Singh gets angry and blames Ichha’s involvement in the ritual for its failure. Satya tells Sanchi that his intention was to hurt the family but he can’t tolerate Ichha’s humiliation. 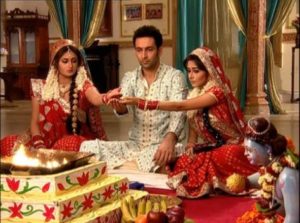 While talking to Sanchi in the room, Satya throws Bundela family photo frame aggressively and Kasha hears the noise. Ichha comes across a rat poison bottle while working and Satya notices it. 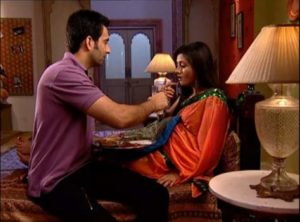 Veer starts taking care of Tapasya, Ichha is upset about it. Veer and Umed meet Satya to discuss about their new diamond factory. Satya tells that they require a huge loan to conduct the plan.

Tapasya gets an SMS from Veer and shows it to Chanda in front of Ichha to make her jealous. Jogi is worried about Tapasya. Umed is worried about the house being mortgaged and Veer consoles him.

Tapasya receives a gift. She gets a phone call and learns that it’s Raghuvendra who has sent it. Raghuvendra tells Tapasya that he is going to reveal that the child in her womb belongs to him.

Tapasya drops the glass in hurry and arrives to search for Raghuvendra. Sumitra gets hurt due to the broken glass and scolds Ichha. Tapasya is unable to find Raghuvendra and comes across Veer.

Veer gets some cotton sarees for Tapasya and gives it to Chanda. She informs Ichha and taunts her for the lack of physical intimacy between Ichha and Veer.

Tapasya tells Baldev Singh that she couldn’t get a gift for him on his birthday but he tells her that the baby would be a gift for him. Ichha saves Tapasya from the falling chandelier. 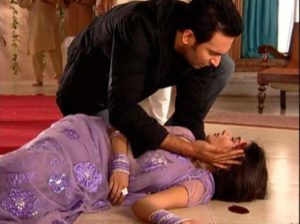 Veer surprises Ichha by bringing in Damini with him so that she could talk to her mother. Damini expresses her wish that Ichha and Veer should have kids and suggests them to go for a treatment.

Sumitra cautions Tapasya that the unborn baby might get frightened due to the heavy sounds of lightning but she ignores her. Tapasya is happy that atleast Veer has shown some sympathy towards her.

The doctor tells Ichha that Veer has a medical condition and they won’t be able to become parents. Ichha calls up Veer but is unable to tell him the news, as it might affect his reputation.

Ichha is confused about whether or not she should reveal Tapasya’s secret, that the baby she is carrying is not Veer’s. Ichha’s car hits Raghuvendra’s car and they meet each other.

Sumitra tells Gunwanti that Tapasya is not eating anything as she wants Veer to feed her with his hands. When Veer is feeding Tapasya, Ichha comes and takes back Veer with her.

Ichha warns Tapasya to leave the house within 15 days and if she doesn’t, she would reveal her secret to the family and get her thrown out of the house forcibly.

It’s the festival of colors and everyone is dressed in white clothes. Ichha swears to reveal Tapasya’s secret. She greets Tapasya and tells her the importance of truth in the festival.

Gunwanti performs a ritual for Tapasya and Veer applies color to Baldev Singh. Damini is happy for Ichha that finally she has been accepted as the daughter-in-law of the house. 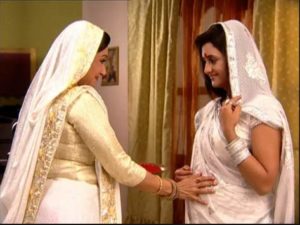 Ichha accidentally meets Raghuvendra as he comes out of Tapasya’s room. Ichha asks Tapasya if the man who just got out of her room is the father of her child, which makes Tapasya furious.

Ichha is trying to tell Veer that Sanchi is not blind and to prove herself right she ties a rope in between the corridor for Sanchi to see and dodge. Sanchi acts blind, proving Ichha wrong.

Ichha gets straight with Tapasya and tells her that she shouldn’t be playing with Veer’s emotions. When Veer interrupts their conversation Ichha acts as if all is normal between them.

Veer and Ichha are going out on a drive and Veer is happy to see a smiling Ichha. Ichha knows that things couldn’t improve between her and Tapasya although she always wanted it that way. 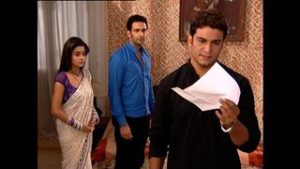