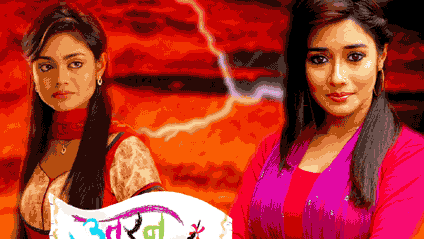 In the upcoming episode Teasers here is the Highlight.

Ichha tells Damini that Veer has decided to get a house for her, Damini says that she wants to live an independent life. Tapasya is shocked to see Mukta and Yuvraj comfortable with Raghuvendra and Ichha.

Tapasya comes to know that the doll she had found at her home belongs to Mukta. Sumitra decides to keep a watch on Raghuvendra. Sumitra catches Ichha feeding Yuvraj.

Gunwanti says mean things to Ichha about Damini. Sumitra tells Tapasya that Ichha visits and feeds Yuvraj. Tapasya tells her that Raghuvendra is doing it for the sake of Yuvraj.

Veer is upset as his family members don’t accept Mukta and Kanha. He decides to leave the house, but Ichha convinces him to stay. A stranger tries to kidnap Kanha.

Ichha becomes restless as Kanha’s life is in a jeopardy. Tapasya is upset with Raghuvendra as he has changed after Yuvraj came into their lives. Raghuvendra cheers Tapasya by making coffee for her.

Raghuvendra books a room in the hotel so that Ichha can feed Yuvraj. Tapasya finds out and plans to ruin Ichha’s reputation. Tapasya tells the police about illegal activities in the hotel.

Police raids the hotel. Ichha becomes restless and admits the truth to Veer. Raghuvendra takes the responsibility for the circumstance. Ichha asks Veer to forgive her.

Veer asks Raghuvendra to handle the situation as he doesn’t want to ruin his family’s reputation. Veer is upset with Ichha for not having enough faith in him to tell him the truth.

Raghuvendra finds out that it was Tapasya who informed the police. Raghuvendra accepts his mistake and asks Tapasya to forgive him for hiding the truth. Ichha shares everything with Damini.

Sumitra admits that she made an impulsive decision without knowing the consequences. Sumitra asks Tapasya to apologize to Raghuvendra. Tapasya holds herself responsible for Raghuvendra’s problems.

Veer confesses to Ichha that she is the most special person in his life. Ichha tells Veer that she is very fortunate to have him. Ichha and Veer promise to never hide anything from each other.

Gunwanti is upset with Veer. Umed explains to Veer that his mother has just lost her grandson. Tapasya gets upset as her son doesn’t recognise her. She blames Raghuvendra.

Raghuvendra apologises to Tapasya for his mistake. Divya tries to make amends with Damini and asks her not to leave the house. Tapasya wants to go to her parents’ house as she is upset with Raghhuvendra.

Veer mends differences with Gunwanti and asks her to support Ichha’s and his decision. Ichha too apologises to Gunwanti. Damini goes to meet Raghuvendra at his office.

Raghuvendra asks Sumitra not to favour Tapasya in every matter. Raghuvendra says that it is not always Ichha who is at fault. Raghuvendra and Tapasya mend their differences.

Divya finds out from Sumitra that Ichha used to meet Yuvraj and Raghuvendra, Divya and Jogi argue over of it. Raghuvendra and Veer decide that Ichha and Tapasya should stay away from each other.

Sangeeta tells Divya that she doesn’t like Damini’s interference in her work. Ichha goes to a temple where she spots Vansh. Ichha is very scared and worried to see Vansh in the temple.

Veer tells Ichha that he is going away on business. Ichha is worried but doesn’t tell Veer anything about Vansh. Vansh returns home. Everyone is shocked to see Vansh.

Ichha faints as she sees Vansh. All the family members, including Ichha deny the fact that Vansh is alive. Vansh tries to convince everyone a lot but no one listens to him.

Vansh tries to convince his family that he is not an impostor. Gunwanti urges Umed to accept Vansh, but Umed alleges that he is an impostor who happens to know details about the family.

Vansh informs that he tried to kill himself, but a priest saved him and helped him recover. He claims to have recently regained his memory and that’s why it took him so long to return to his family.

Everybody in the family warns Gunwanti against Vansh. Umed asks the family members to be very alert as the stranger who is pretending to be Vansh can be dangerous.

Ichha keeps a watch on Vansh. Jogi asks Vansh about his intentions and threatens to hand him over to the police. Jogi asks Ichha to come with him as it’s not safe for her to stay with the stranger.

Veer tells Ichha that he misses her a lot and will be back soon. Vansh misbehaves with Ichha and tries to get close to her. Ichha slaps him and warns to leave the house.

A goon attacks Divya, Damini tries to save her and gets hurt. Divya feels guilty for misunderstanding her and seeks apology. Divya asks Damini to promise her to never leave the house.

Vansh warns Tapasya that he will have his revenge. Vansh tries to convince that he is not a stranger but Ichha doesn’t believe his argument. Damini becomes restless on learning that Vansh is back.

Tapasya informs Raghuvendra about Vansh. Umed is worried as Gunwanti is under Vansh’s spell. When Vansh comes to the dinner table everybody leaves the table.

Jogi informs everyone that Veer will be back in 3 to 4 days. Ichha sees Vansh with Mukta and warns him. Ichha is suspicious as Vansh knows every detail about them. Vansh loses his lens.

Vansh loses his lens just as Ichha comes. He manages to save himself. Raghuvendra asks Sumitra about Tapasya’s restlessness regarding Vansh. Damini is shocked to see Vansh.

Damini refuses to accept that Vansh is back and asks Vansh to stay away from Ichha. Vansh plans to leave home but Gunwanti stops him. Amidst the chaos, Gunwanti faints. Ichha and Damini call the doctor.

Sumitra asks Pushkar to maintain Yuvraj’s secret. Ichha asks Vansh to stay away from Kanha. Tapasya tries to please Raghuvendra by wearing his first wife’s clothes, but he gets angry on her.

It is Ichha’s birthday and everyone wishes her. Tapasya and Raghuvendra aren’t on talking terms yet. Vansh plans a birthday surprise for Ichha but at the same time Veer steps in the house.

Ichha tells Veer that someone is disguised as Vansh and is living in the house. Veer accepts him as his brother. Ichha and Veer have an argument over it. Veer shouts at Ichha.

Tapasya wants to find the truth behind Raghuvendra’s first marriage. Jogi calls Veer to talk about Vansh’s imposter. Veer tells Jogi that it’s the real Vansh, and not an imposter.

Vansh (imposter) is asked to sign on the property documents. He doesn’t know how to write but manages to forge Vansh’s signatures. Tension between Tapasya and Raghuvendra increases.

Sumitra finds out from Pushkar that Veer has accepted Vansh. Sumitra asks Damini to tell Ichha to stay within her limits. Vansh asks Veer to let Ichha return to him as she is his wife.

Gunwanti says that Ichha is legally Vansh’s wife so she should leave Veer and stay with Vansh. Ichha says that she cannot leave without Veer. Veer and Ichha are confused about Vansh’s (imposter’s) intentions.

Veer and Ichha try to figure out Vansh’s (imposter’s) true identity and his motive behind living with the family. Raghuvendra calls Ichha and expresses his concerns for her and the family. ……… Ichha and Veer plan fail to know the true identity on Vansh (imposter) on True love Teasers May 2019 glow tv

Note: This Update below are old.