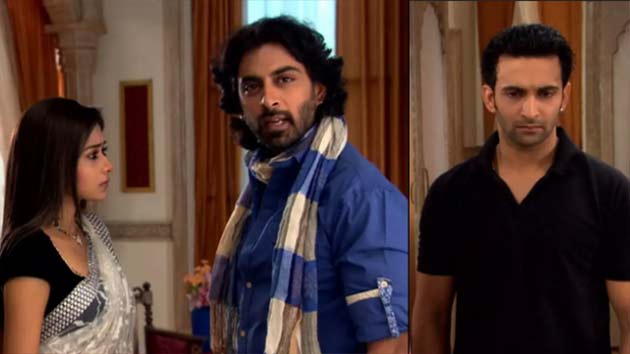 Sumitra goes to meet Vansh (imposter) and their conversation gets awkward. Sumitra brings used gifts for Kanha and Mukta but Ichha accepts them. Veer asks Vansh (imposter) to resume office.

It is Kanha’s birthday and Ichha expresses her desire to perform a ‘puja’. Vansh (imposter) threatens Veer that he may kill Kanha. The maid informs Tapasya that her son is set to return home.

Sid enters the house and Tapasya is shocked to see him. Raghuvendra says that Sid is like a brother to him. Sid finds out that there is some tension between Tapasya and Raghuvendra.

Vansh (imposter) misbehaves with Ichha but Veer intervenes at the right time. Veer asks Vansh (imposter) to stay in his limits. Jogi asks Sumitra if she is conspiring against Ichha to ruin her life.

Veer is worried as he cannot get rid of Vansh (imposter). Sumitra leaves Yuvraj with Divya and Damini and goes out shopping. Damini feels that Yuvraj is related to her somehow.

Sumitra meets Sid and recollects everything that had happened in the past. Jogi goes to meet Ichha. Jogi meets Vansh (imposter) too and tells him to stay away from Veer and Ichha’s life.

Sid says that he will exact revenge from Tapasya. Veer goes to meet Tapasya in order to get a clue against Vansh (imposter). Veer and Tapasya end up arguing with each other.

Raghuvendra asks Sumitra to tell him everything about Vansh.

Raghuvendra wants to find out the connection between Tapasya and Vansh. It is Kanha’s birthday and the preparations for ‘puja’ are in process. Damini wishes Kanha on his birthday.

Gunwanti insists that Ichha and Vansh (imposter) to perform the ‘puja’ together. Veer doesn’t like it at all. Even Damini opposes this decision but Gunwanti doesn’t pay heed to her.

It is revealed that Vansh’s (imposter’s) name is Rocky. Pushkar tells Sumitra what happened at the ‘puja’. Sumitra reveals her happiness on hearing it and Raghuvendra overhears their conversation.

Jogi lodges a police complaint against Rocky. Rocky meets his beloved and tells her everything. Ichha goes to fetch Kanha from school but cannot find him anywhere.

Rocky kidnaps Kanha and threatens to kill him if Veer sought police’s help. Ichha asks Jogi to tell the police not to interfere in their family matter anymore. Jogi suspects that something is wrong.

It is revealed that Gunwanti hired Rocky to drift Ichha and Veer away from each other. Gunwanti says that she had planned it because of Ichha’s decision of not giving birth to a child.

Ichha tells Jogi about Kanha being kidnapped and about Rocky’s warnings. Rocky goes to the bar to meet Ruby where Pushkar sees him. Pushkar goes home and tries to tell the truth to everyone.

Sid tries to provoke Raghuvendra against Tapasya. Raghuvendra wonders how Tapasya spends all the money that she asks from him. Rocky tries to misbehave with Ichha.

Veer follows Rocky to the bar and meets Ruby. Veer gets to know the truth about Rocky. Ichha plans to trap Ruby in order to find out the person behind all this melodrama.

Veer tells Gunwanti the truth about Rocky but she refuses to accept it. Veer plans to bring Ruby home so that she can expose the truth in front of everyone.

Veer asks Ruby to expose Rocky in front of everyone but she says that she doesn’t recognise Rocky. Gunwanti had already told Rocky about Veer’s plan. Veer is disappointed because of it.

Owing to the differences and misunderstandings between Tapasya and Raghuvendra, Tapasya leaves the house and goes away. Ichha and Veer hatch a new plan to trap Rocky.

Tapasya goes missing. Raghuvendra looks for Tapasya everywhere but cannot find her anywhere. Raghuvendra finds out that Sid had blackmailed her and scolds Sid.

Raghuvendra criticises and scolds Sid for compelling Tapasya to leave the house. Divya calls Sumitra to find out Tapasya’s whereabouts. Raghuvendra calls Ichha and tells him what has happened.

Raghuvendra goes to meet Jogi and asks him to help him find Tapasya. Rocky goes there and insults Ichha in front of everyone. Veer convinces Ruby that Ichha is Rocky’s wife. Ruby is worried.

Sumitra and Raghuvendra are very worried for Tapasya. Sumitra blames herself for everything. Veer manages to convince Ruby that Ichha is Rocky’s wife. Ruby and Rocky get into an argument.

Rocky tries to force himself on Ichha during Veer’s absence. Gunwanti asks Jogi to help them. Jogi goes there and mistakenly kills Rocky while defending himself. Veer meets with an accident.

Veer promises Ichha to save Jogi. Veer tells the family that it was Gunwanti who had hired Rocky and conspired against the family. Gunwanti accepts her mistake and apologises to everyone.

Sumitra and Divya wonder about the whereabouts of Tapasya. Sumitra gets a call from Umed saying that Jogi has killed Rocky trying to defend himself and has been arrested by the police. Divya is worried for Jogi.

Sumitra and Divya blame Ichha for everything that has happened. Raghuvendra says that Sumitra doesn’t look after Yuvraj properly. Ichha asks Veer to forgive Gunwanti but Veer doesn’t listen to her.

Ichha tells Veer that Gunwanti did all that for the family. Umed criticises Gunwanti a lot. Raghuvendra tells Jogi that he will bail him out. Jogi tells Ichha that he is happy to help her.

Ichha thanks Veer for bringing Gunwanti home and asks him to forgive her. Damini goes to meet Jogi in the jail and says that he is in the prison because of Ichha. Jogi says he was just fulfilling his duty.

Sumitra is trying to console Divya and gives her hope about Tapasya’s return. Veer is in no mood to eat and tells Gunwanti that he will eat his meal in the flight.

Raghuvendra is frustrated as the formalities for Jogi’s bail are taking too long. Raghuvendra decides to call up the commissioner of police in order to get his work done.

Veer receives a call from Ichha telling him about Jogi’s pending bail request. He wants to come back immediately but Ichha tells him to talk to Raghuvendra about it.

Divya is loosing hope about Jogi’s release from the police station. Damini tries to consoles her. When Damini offers a glass of milk to Divya, Sumitra starts taunting her.

Raghuvendra is furious with the lawyers he has hired. The lawyer informs him that the charges against Jogi are severe and its difficult to get him bailed out.

Daija’s attention is diverted momentarily from Yuvraj’s stroller. The stroller goes down an inclined path putting the baby in harm’s way but it is stopped by a good Samaritan.

Ichha and Sumitra along with everyone else arrive in the CCTV room of the hospital where Ichha was admitted. Ichha is unable to find the footage where Sumitra was caught stealing her baby.

Jogi laments about the facts responsible for the situation that the Thakur family is going through. He looks at a picture of Tapasya and Ichha, who in real life are never happy with each other.

Sumitra gets hysterical after receiving a blank call and guesses the call was from Tapasya. She happily announces that Tapasya will be back in the Thakur house.

Ichha is worried about Yuvraj and she is sure that Avinash has kidnapped him. She decides to call Veer but sees Umed coming towards her and is reluctant to make the phone call

Damini tells Ichha to stop worrying about Kanha’s whereabouts. Ichha is unable to tell Damini that Yuvraj is her son and that Avinash wants to exchange Kanha in return for Yuvraj.

Avinash is fed up of Yuvraj’s constant crying and he is unable to handle the baby. A woman overhears a drunk Avinash trying to talk with the baby, trying to calm him down.