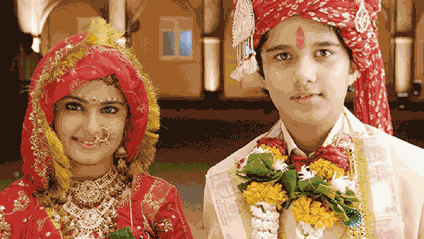 Episode starts with a pooja at the Haveli, Gauri comes in and calls out Bapusa, the family are confused and shocked to see Gauri there. She takes her sandals off and comes towards them. She states that she came at the right some when there is a pooja and she can get arti. Everyone walks away from there leaving her on her own. She follows them to the living area and tells them she came here for a reason. She explains that her Bade Papa told her everything that Bhairon had done and she would not have been able to carry on with her studies. She tells Bhairon that he has such a big heart to have done all of this.

She continues that she will be forever in his debt and no one can fathom that he could do such a thing, she goes to take ashirwaad put Bhairon stops her mid way. Gauri then reveals that he must have thought that when Gauri found out that truth he probably expected her to run to her for thanks. She asks if she thinks of himself some angel or god and that he ruined her life and now he is doing this. He has only put an amount on her life and what they did to her. Basanth asks why she came here to begin with. Gauri asks if they were so upset about everything why did they break her marriage at the time. She states that they have done all this to obtain forgiveness because they have the money to be able to do so. Sumitra tells her to hold her tongue. Gauri starts to shout and asks if what she is saying is wrong. Gauri states that Bhairon stopped the money on purpose so that she finds out about what they have done, she calls them liars and small minded people. Anandi comes is and tells Gauri enough is enough.

Anandi tells her not to say another word. She must think that people in the haveli are weak because they are just lisenting to her, but this is due to their sanskaar and they have dignity otherwise they would have kicked her out. Education makes one more aware about their surrounding, what sort of education did she get that she is acting and talking like this. How dare she speak ill of her person that has done nothing but good for her. Gauri calls her sarpanji and tells her to give these bhashans to the villiage. Anandi stops her and says till now she has never stopped her because it was aimed at her, but now that she is questioning her family and she will not stand for it. Gauri should look into herself before talking about other. She says that its Gauri that is small minded. Bhairon states he doesn’t find it necessary to explain himself but he does feel bad that he has helped someone that is so selfish, he may have educated her but has not helped her mental state. Sumitra tells Gauri that now she has realised that Jagat will not be able to stay with her for long. Their marriage will not last because of her behaviour.

Sumitra says she knows Jagat more and he has been waylaid and he still misses his family, he has just lost his way. But its not long before the truth comes out to him. One days Jagat will come back home, Gauri retaliates that when Jagat becomes aware of their truth he will never come back. Sumitra challenges her to see whether a Mother trust wins or that of the wife’s. Gauri accepts the challenge

Sumitra and gauri challenge each other! Gauri leaves with anger. Singh family is highly irritated. Bhairon tries to call jagiya but anandi stops him. When sumi asks her she replies it won’t make jagiya happy. He won’t bear the insults of his family. A new member will come in their (JG) family soon and this will create tensions. And if they will complain about gauri to him then there will be no difference between them and JG! Sumi and bhairon appreciated her.

Gauri is thinking about all the happenings in the haveli.she gets jagat’s miscalls and starts talking to herself that singh family is at fault. Their love is fake and her love is true. She will prove it .She won’t let jagiya to return to his family and anandi. she will win.

Some kids r playing. The strange ghunghatwali lady stares at them.

Shyam informs his perents that Dr abhisek assured them that varun will recover soon. All r happy. Varun is happy too and tells sugna that he was right that mamusa will cure him. Shyam agrees with him and tells sugna that it is true that jagiya helped him. They should inform jagiya about varun’s developments. Sugna and his parents hesitate but shyam tells him what jagiya did to them, they should keep that aside and should think this matter differently. And if they will not inform him then the pain jagiya gave to them, they will give him more pain compare to that. Varun too forces sugna. Sugna agrees.

Sugna calls jagat .jagat is emotional. Sugna informs him about the developments in varun’s health. And tells him that the CDs which he gave, are helping varun a lot and thanked him. Jagat is very happy and wants to tell gauri and realizes that gauri is not at home.

At that time Gauri reaches there. jagat happily tries to inform her about varun but gauri starts accusing him that his family is always important. He doesn’t care about her. She just came there and he didn’t even ask her a glass of water. Jagat is upset and goes away. Gauri recalls sumitra’s challenge and goes towards jagat . She hugs him and says sorry for spoiling his happy mood. She was very tired due to long journey but now wants to listen about varun as he is her bhanja. She keeps saying sorry to him. Jagat asks her y she went without informing him and he tried to inform her about varun 1st as her parents don’t know about varun. Gauri says she is very happy that he wanted to share things about varun 1st.. She wants to be with him always and wants to congratulate shyam and sugna but she knows they won’t like it. Jagat assures her that everthing will be fine one day. They hug. Gauri is thinking now jagiya is with her. Not only she is winning but also her MIL is loosing.

Precap- Anandi goes to meet some one at night. She knocks a door in torch light. Door is opened and anandi gets a shock after seeing someone (I think the same strange ghunghatwali lady!!)