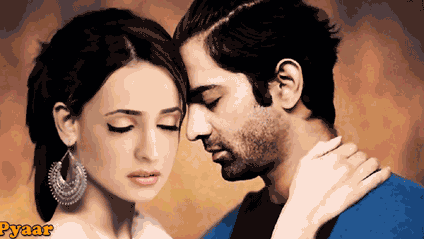 The show begins with Khushi’s voice talking to someone.Arnav goes towards the sound and sees Khushi is teaching some children tution. Arnav saysWTH … Khushi begins her tutorials. … tries to teach ard. 4 students. Arnav is angry and goes out and ask Nani what is this ?Manorama says: Until you guys have your child, Fatisari will teach other children.Nani says: Khushi works with tiffin system and evening she will do some tution whats odd in that.

Khushi begins tution with some storytelling about some Angel and Jungle… Horror … While telling horror story in dark. Suddenly Arnav comes and scares everyone… Khushi shouts and so the children.Arnav goes out of the room. Khushi continues her story of demon & angel. She slowly starts telling her own story in disguise…While telling story… her eyes meet Arnav’s even Arnav understands the story … The story of Prince & Demon both are same… one haunts her another is her prince charming… Angel is confused…

Children ask what happened then ?Khushi says nothing… .Suddenly the children starts fighting… and breaks pencil. Khushi goes out to bring new pencil. The children makes some plan.Arnav is watering plant, suddenly phone rings he goes out while talking… when he returns… all his plants are gone…and the children are in pose to attack Arnav

One child says: If you want your plants then you need to eat Green Chilli. Or you need to sign this letter. The letter says ‘I will eat harpeet… Sign Here’.Arnav makes joke and says why not eat you. They give one letter to Khushi. Which says I am shaitan.. why are you using children… blah blah…She writes something on paper and hands to one child to give that letter to Arnav…

The exchange of letters begins each rambling what they think about other… each making fun of other.While exchanging notes, Anjali comes in between and reads one note send by Khushi to Arnav. She reads and realizes once again the couple are fighting. She takes note and tell kid that she will hand that note to Shaitan.

Khushi entering the bedroom where Arnav acting to be asleep on couch.Suddenly goat comes she starts talking with goat. She says I will not show my face to Arnav. Will be working to keep myself away from him..Arnav hears all that… she goes to bed and sleeps.Arnav looks sleeping beauty.

Next morning suddenly Arnav is awake due to some disturbing sound.He comes down dressed. Anjali meets him. She says: Why has Khushi gone so silent why is she giving tution ? She advises Arnav to look after Khushi.Arnav says: There is nothing to worry.

Arnav goes to office. Anjali goes to Khushi’s room advice her. She tells Arnav’s childhood. Arnav never liked anyone showing love to him. He loves everyone but he doesn’t know how to express his love. Khushi plans to use his that behaviour against him to make him angry now.

So when he comes home from office… she acts like SATI-SAVITRI and tries to take off her shoes. She enacts Gopi of Saath Nibhana Saathiya… Arnav gets irritated… and goes to other room.

Manorama goes to Akash-Payal’s room to give news regarding some guest coming soon in the house.

Khushi goes on irritating Arnav says she has already arranged Towel, perfume and everything for morning… She hands him a glass of water. Arnav goes to bathroom.

At drawing room, Akash is happy that guest named bubbly is coming. Payal is bit amused who is Bubbly.

At Arnav’s bedroom, Arnav is anxious to see his wardrobe being changed with colorful clothes…

Khushi has thrown all his old clothes.. and replaced with all colorful flashy shirts. He calls Akash for some shirts but even he has gone out even Payal can’t help has Akash has cupboard keys.