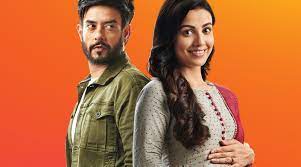 In front of the Sakhujas, an intoxicated Sukhbeer tells a dumb joke. Pritam later visits Amrita’s room in a desperate attempt to grab the bag and feels compassionate towards her.

While checking the luggage, Pritam overhears Amrita and Karan having a deep conversation. Later, Gurmeet and Krishnakant clash about the adjustments to the celebration.

Pritam escapes from the bag while the Sakhujas quarrel with Krishnakanth. He attempts to retrieve Amrita’s attire, but is apprehended by Rathi’s men.

Rathi kidnaps Pritam and refuses to let him go to Amrita. He battles Rathi’s thugs out of desperation and brings Amrita her clothing.

Pritam alerts Mansoor about the bomb planted in the house and promises to save the family. Meanwhile, Amrita’s Godh Bharai ritual starts on a grand note.

The Sakhujas are awestruck by Pritam’s dance abilities and erudition. While they are enjoying the baby shower, a police squad is plotting an attack.

The authorities burst into the Sakhuja residence in order to seize Pritam and Gurmeet in connection with a murder investigation. Can they show their involvement, even if they deny it?

When Pritam and Gurmeet are apprehended by the police, the Sakhujas are terrified. Amrita tries her hardest to appease the family. What is going to happen now?

Pritam is found not guilty by the police, but Amrita is furious with him since he ruined her Godh Bharai rite. She, on the other hand, can’t seem to get his name out of her head.

Pritam hands over the luggage to Rathi, but the latter gets suspicious. Later, Pritam reveals to Mansoor that he gave the fake RDX to Rathi to set him up.

Pritam tells Mansoor that the Sakhujas would not be in danger. Later, Kabir’s supervisor discovers Dolly, whom he had assumed was dead, shocking Kabir!

When Kabir loses his job, he is in serious difficulties. He must also return his supervisor for the advance salary. Naveen’s pocket later drops a sachet of narcotics.

When Pritam discovers that his ex-wife is attempting to remove his son against a court order, he becomes enraged. Gurmeet, on the other hand, decides to sell the store.

As Amrita sells Karan’s bonds to support Kabir, the money’s validity is called into doubt. Meanwhile, Angad is looking for a job entirely based on his qualifications.

Meera overhears Gurmeet apologizing and disclosing all of his issues to Kabir’s supervisor. Pritam’s ‘jhunjhuna’ is later returned to Amrita.

Sukhbeer proposes to take a job for money, and Amrita becomes agitated at the prospect. Pritam looks forward to meeting his son later.

When Pritam is prevented from meeting his son, he becomes distraught. Pritam’s ex, meantime, believes he is having an affair with Amrita and threatens her.

The Sakhujas question Pritam about the presents, but Amrita intervenes and explains it’s for an orphan. She later asks Pritam to tell dadu about his sentiments.

When Kabir storms into Pritam’s room and demands that he find him work, he becomes enraged. Meera later sees Pritam at a party and feels he is the one who followed her.

Pritam compels Soniya to leave the party since he is aware of the raid, and the two of them manage to flee in time. Naveen, on the other hand, flees the party before the authorities come.

When Amrita witnesses Soni thank Pritam, she becomes intrigued and wants to know the truth. Meera, on the other hand, wonders if Naveen attended the rave party.

While the Sakhujas make fun of Pritam, Kabir sneaks inside Meera’s house. When Pritam injures his hand, Amrita comes to his rescue.

As the Sakhujas make fun of Kabir, Pritam mocks him. Pritam and his gang strive to uncover the truth as a terrified Naveen desires narcotics.

After meeting Vishaka, Pritam loses his cool. He becomes concerned about Amrita’s health as she threatens to take action against him.

Pritam confronts Amrita while inebriated, irritating the Sakhujas and making her insecure. Later, as he lifts her and brings her to the cab, she hits him.

Pritam admits Amrita to the hospital and blames himself for her ill health. Later, in front of the Sakhujas, the Doctor makes an unexpected choice.

Amrita’s parents come to the Sakhuja home, looking forward to meeting their new grandchild. The Sakhujas are concerned at the hospital when Amrita and the baby go missing.

If Rati and his men torture Amrita, Pritam threatens to murder them. Pritam takes a bold move while the Sakhujas search for her.

As Amrita is discharged and returns home, the Sakhujas give Jr. Karan a warm welcome. Pritam eventually decides to leave the house.

After forgiving Pritam, Amrita forbids him from leaving the house. Later, Kabir, Angad, and Pritam decide to throw a party to commemorate the happy event.

Pritam brings Kabir and Angad to a pub to have a good time, but he becomes concerned when he sees an adversary. Amrita later overhears Pritam’s remarks against her.

After being beaten up, Pritam is ambushed in the pub and loses consciousness. Pritam’s talk with Mansoor is later overheard by Sukhbeer and Gurmeet.

When Pritam collapses in his chamber, Amrita informs the Sakhujas, who carry him downstairs to care for him. Pritam afterwards provides Kabir and Angad some counsel.

Amrita’s remarriage is discussed by Kuljeet and Gurmeet. In the meantime, Pritam is moved by the Sakhujas who are looking after him.

Pritam unexpectedly opposes to the Sakhujas’ choice of Rahul for Amrita’s son and proposes Karan instead. Meera, on the other hand, finds herself in a difficult predicament.

Amrita gets surprised by Kabir and Angad with a date that is identical to the one she had with Karan. Pritam is horrified by his past, while she is nostalgic.

While surviving yet another onslaught, Pritam finds himself in an awkward predicament in front of the Sakhujas. Pritam later gives Amrita’s kid an emotional present.

The men of the Sakhuja household dance and entertain the women. Pritam too is asked to dance, as he is family now. Later, some eunuchs partake in the celebration.

Pritam gets in an embarrassing situation in front of the Sakhujas while he survives yet another attack. Later, Pritam gives an emotional gift to Amrita’s son.

The men of the Sakhuja household dance and entertain the women. Pritam too is asked to dance, as he is family now. Later, some eunuchs partake in the celebration.

While the Sakhujas find signs of intrusion in their house, Pritam chases down the intruder. Later, Pritam threatens Rathi for putting Amrita in danger.

Nimmo overreacts to Amrita’s style of babysitting and loses her cool in front of the family members. Later, Pritam taunts Amrita for missing her shot.

Pritam expresses disgust while eating breakfast with the Sakhujas. Later, he cooks for the family and impresses them with his extraordinary culinary skills.

Amrita tastes the Parathas made by Pritam and is spellbound. Elsewhere, Kabir’s family persuades him to go back to work.

Pritam warns Amrita when she gets too close to a candle. Later, Kabir overhears a conversation between Naveen and Meera.

Pritam sets a meeting with Meera not realising that Naveen is her brother. He chases Naveen as he tries to run after being recognised.

Pritam slaps Naveen and drags him out of his house. On the other hand, the Sakhujas sing a song for Nimmo to cheer her up after she suffers an emotional outburst.

Meera sees a video of Pritam abducting Naveen from his home. Krishnakant assumes Gurmeet to be behind the incident and confronts him.

As Krishnakant and Meera demand for Naveen, Pritam pretends to be innocent. Later, Pritam informs them about Naveen being a drug addict!

The Sakhujas are impressed as Pritam comforts Ansh and puts him to sleep. Later, Amrita’s parents put forth an unusual request to Gurmeet.

Pritam and his friends head to a secluded location to apprehend a drug dealer. Amrita, on the other hand, calls him and criticises him for his way of speaking.

Nimmi confronts Gurmeet about Amrita’s remarriage. Meanwhile, Amrita is unaware that a young man named Yuvraj is on his way to meet her.

While Yuvraj comes to the Sakhujas house to meet Amrita, Nimmo remains unhappy about the whole situation. Later, Sandy, the drug dealer, admits to his crime.

While talking to Yuvraj about Amrita, Pritam expresses his warm admiration for her. Elsewhere, Nimmo gets irked as she doubts Yuvraj’s intentions.

Kabir receives a warm welcome after rejoining his office. On the other hand, Angad refuses to accompany Pritam and Amrita to Ludhiana.

After bidding adieu to the Sakhujas, Pritam and Amrita depart for Ludhiana by car. Later, Nimmo and Santo learn a piece of alarming news from Sukhbeer.

Nimmo gets uncontrollably furious after learning that Gurmeet hid the truth about getting Amrita remarried. Subsequently, Nimmo confronts Gurmeet.

Kabir bumps into Vishaka at his office. On the other hand, Pritam grants permission to Amrita take over the wheel and drive to Ludhiana.

Vishaka approaches Nithin and makes an enticing offer. Meanwhile, Amrita and Pritam are confronted with an unexpected circumstance. How will they deal with it?

Vishaka wants Kabir’s most recent images for a project they’re working on. Pritam narrowly avoids being exposed in front of Amrita somewhere.