Sweet Revenge is a story, set in the eastern megapolis of Kolkata. It is not a revenge story but a story of the female protagonist, Durga, seeking justice for a crime committed in the past. Her methods of claiming justice are unconventional as she steps out of the shackles of traditionalism and utilises her Mind to conquer Might! The show tracks the journey of Durga as she attempts to stand up to the power and might of the influential Goenka family. Will Durga be successful in her mission or will she too fall aside like every other person who has stood in the way of the Goenkas? Who will reign supreme in this challenging battle of wits and intellect, where everything seems to be a fair game! 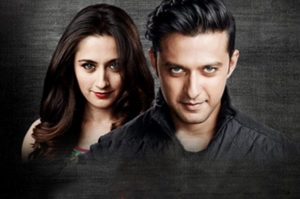 Sweet Revenge (Indain: Ek Hasina Thi  ) is a Crime thriller television series created by Cinevistaas Limited for the channel Star Plus from 14 April 2014 to 20 December 2014. Produced by Prem Krishen, Ek Hasina Thi is loosely based on the American series Revenge. The series has Sanjeeda Sheikh and Vatsal Sheth as leads, and, Simone Singh and Ayub Khan in supportive roles. The show is set in Kolkata, but is filmed in Mumbai.The series was earlier titled Daag.The show was acclaimed by critics and viewer and it was one of the most successful show of Star Plus at that time.Simone Singh‘s performance has been lauded.

The story line of the show has been revolving around Shaurya and Durga’s wedding, where the preparations have already begun. A captivating twist in the tale is coming up which will be a surprise to the viewers.

Our source says, “Shaurya will deny at the last moment to marry Durag and will want her to live life happily after marriage. He will ask her to marry Dev (Bhuvnesh Maan) instead of sacrificing her love. On the other hand Dev will be reluctant to marry Durga as he loves Nitya being unaware about the fact that Nitya is only Durga.”

“After the much needed drama Durga will agree to marry Dev but he being reluctant will not agree to do so. Rajnath (Ayub Khan) will convince Dev to marry Durag promising to let him know about Nitya’s whereabouts,” adds our source.

“Saakshi (Simone Singh) will also agree to this wedding as at least she will be able to keep an eye on Durga’s moments,” ends our source.

How will the story unfold after Dev and Durga’s marriage?