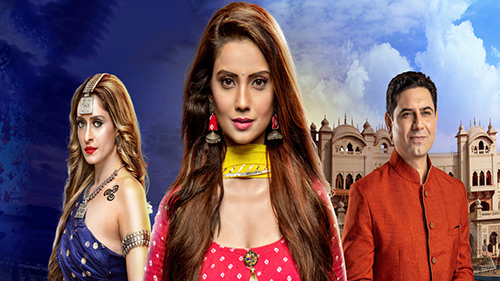 It follows Sitara, a Visha Kanya (poisoned girl), who grows up without knowing her true identity.
However, she gets drawn into the tussle of choosing between good and evil, after learning the truth about her biological mother.

Episode 1
Sitara lives a humble life with her father. Little does she know, that beyond the safety of her own home, sinister forces, known as Vishkanyas, threaten to break free of their ancient shackles.

Episode 2 Part 1
Sitara is worried that Chanda, her friend, has gone missing. She enters the royal palace to search for her.

Episode 2 Part 2
According to ancient beliefs, The Visha Kanya were young women reportedly used as assassinsduring the times of the Ancient India. They were carefully fed poison from a young age and eventually became immune to the poison. Their own bodily fluids became poisonous and hence they were used as weapons.

Episode 3
By entering the Palace, Sitara sets free the powerful Vishkanya, Vrinda from her shackles, who swears revenge against her captors.
Monday 19 April 2021

Episode 4
With Vrinda awakened, Kuldeep is worried. Sitara talks about going deeper into the forbidden part of the palace in search of Chanda. Fearing the wrath of Vrinda, Kuldeep warns her not go there.

Episode 5
Ignoring her fathers warning, Sitara ventures deep into the forbidden part of the palace, and finds a secret door, behind which the Vishkanyas are shackled!

Episode 6
Sitara’s quest takes her deeper into the palace, in which beneath lies Vishkanya Vrinda. Will Sitara uncover the dark secrets concealed in the palace?

Episode 7
After much  thought, Viraj decides to marry Netra, which marks a new beginning for the Singh family. Little does he know, Netra’s family are plotting to take over the family property!

Episode 8
Viraj and Netra are set to tie the knot, leaving both families in a celebratory mood! Unknown to them, the Vishkanyas have opened the secret door which confined them from the world!

Episode 9
Vrinda finally walks out of the secret door to her freedom, which is then threatened by Rajguru, who is determined to lock her up again!

Episode 10
Desperate for freedom, the Vishkanyas plan to control Sitara’s mind and body to break out of captivity, once and for all.

Episode 11
Rajguru breaks the spell set on Sitara and stops the Vishkanyas from escaping captivity.

Episode 12
Vrinda senses something familiar about Sitara, and decides to find out more about her.

Episode 13
Rajguru’s doubts about Sitara increase, he becomes determined to find out the truth.

Episode 14
Out of fear, the villagers mistake Sitara for a Vishkanya and try to bury her alive!

Episode 15
Sitara and Viraj arrive in the nick of time to save Chanda. The villagers fear that she has turned into a Vishkanya.

Episode 16
Vrinda uses her magic powers to read Sitara’s palm, and discovers the shocking truth, Sitara is her daughter!

Episode 18
Despite being turned away from the wedding ceremony, Sitara impresses everyone by saving Raja Ratan from a falling pillar.

Episode 19
Sitara is attacked by two masked assailants and Viraj arrives just in time to save her!

Episode 20
After failing to kill Sitara, Rajguru continues his plans to trap her, and conjures a horde of scorpions, and lets them loose on her.

Episode 21
Fearing that Sitara is the key to the Vishkanyas freedom, Rajguru orders his servants to bury her alive. Her disappearance raises an alarm in the Singh family, who go looking for her.

Episode 22
The Vishkanyas combine their power to destroy the ground, to create a route to be able to free Sitara. Will they succeed before she suffocates to death?

Episode 23
Rajguru demands that Kuldeep hand over Sitara to be the Royal Family’s protector against the Vishkanyas.