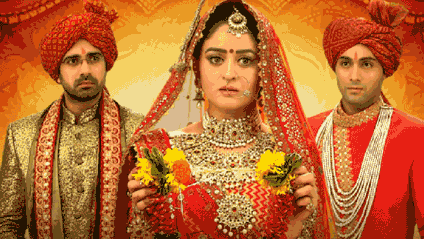 At haveli,Anandi is in the puja room. A man comes there and informs her that a child is lost due to that daayan and asks her to help. Anandi tells sumi and gehena about it and leaves with the man in hurry.

At the child’s home, parents r crying and cursing the daayan. Some ppl r there too and accuse the daayan for it. Anandi asks them how they r so sure. Another man informs her that he saw the daayan was staring at some kids who were playing at that time. Anandi tells him that he didn’t see her kidnapping any kid. so it is just an assumption. But ppl don’t agree so, she decides to go to the daayan’s place to know the truth. Few ppl go with her. They searches the daayan . Everybody notice two horrible eyes which r later revealed as cat’s eyes. But ppl gets scared and refuses to go with anandi. Only two ppl go with anandi.Rest goes to bhairon to inform him. Anandi and the other two men reach at a rejected house. One of them tells her not to go inside in the night but anandi wants to go. She enters inside alone.

Inside the rejected house,She searches there with torch light. Suddenly her dupatta stuck somewhere; anandi removes that and again starts searching. Suddenly she sees a doll and woman is crying who seems very scared. Anandi is lil scared too and asks who is there but no ans comes from there. anandi’s torch stops working but when after some time it starts working , the lady vanishes from there. No one is there.

Here at the haveli, some ppl inform bhairon about anandi and bhairon goes with them in tension.

Scene changes , that lady (daayan) tries to escape behind anandi but anandi sees her and shouts at her to stop and tells that she is here to help her. But the lady warns her not to come near and throws a stone at anandi. That went directly to anandi’s head but didn’t hurt much. That lady locks herself in a room. Anandi knocks a door. Door is opened and anandi gets a shock after seeing the lady with an axe and a big scar on her face. Anandi assures her that she won’t hurt her and tells her that she is Anandi and the sarpanch of this village and wants to help her. That lady is in tears. Outside the rejected place.

Ppl r worried for anandi and some decide to go inside to help her but they decide to go through a different way.

Inside the rejected house, That lady is sitting and anandi asks her where the kid is. That lady gives no answer. Anandi continues if the kid wont be found then ppl will kill her. She is not safe and asks her not to come out. The lady is very scared as ppl r searching her to kill. Anandi again assures her she will tell the real truth in front of everyone that she is not a daayan but after finding the kid.

Anandi talking to the lady that she will try to prove her innocence once the child is found. She reassures her that she will do what needs to be done. Anandi leaves from there. Outside she tells the villiage men to come with her, everyone is searching everywhere for the child. Basanth and Bhairon enquire about Anandi, she finally comes back and the mother is distressed about her child thinking that the dayan has it. Anandi informs that the lady does not have the child, but mother does not believe it. No one is believing that the lady does not have the child

Anandi is trying to make everyone understand that the lady is innocent, but still the villiage people do not believe her. The villiage people are then questioning her tactics and her role as Sarpanch. Anandi enquires about the son to the mother. Anandi reassures the family and the villiage people. She tells Bhairon to come with her and asks Basanth to wait for the dayan lady for her safety. Everyone talks badly of the dayan and talks ill of Anandi and that they was to kill the Dayan. Anandi goes to speak to the lost child’s friend and enquires about him, and he replies that they were playing hide and seek and he could not find him. She calls for all the kids that played hide and seek. The villiage people come to the Dayan’s house and start beating the lady. Anandi enquires to the children and asks for their help for finding him. She tells them to hide and such places where they think they cant be found. The villiage people are continuing beating up the lady and she is protesting

Anandi and Bhairon are searching in various places for the children. The dayan lady is protesting that she is not a dayan. The people think of tying her up or stoning her or burning her alive, another say her clothes should be taken off and walked all around the villiage. Basanth protests against their action and should wait for Anandi, but the people don’t listen and talk against Anandi what does she know. They state too much studying can make people ignorant. Basnath demands that people should wait and she is the sarpanch they should listen to what she has asked of them. The villiage people drag the lady away.

Anandi is searching still with the children, but they are not able to find raju still, Anandi then comes across a house and finds out its Raju’s house but the kid says he would not hide in his own house