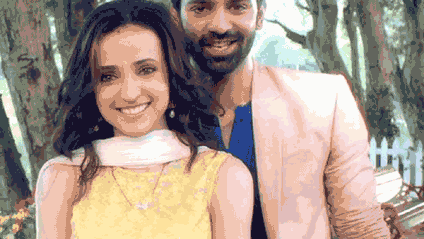 Khushi today is all set to follow Shyam. She even takes out her bangles to avoid any unlikely sound. Shyam walks to an abandoned place but is in an impression that someone is following him. He hands over a bag full of money to three suspicious persons. Khushi is looking at all this from behind a tree. Shyam and those three persons go inside a room. Shyam is shouting at a person who is sitting on a chair. Khushi is peaking a view from the window, standing on a plastic crate. She slips and alerts everyone with her shout. Those unknown men start following Khushi but she manages to escape and hide herself inside a shuttered shop. After she is confirmed that they have left, she comes out. When she was looking for some clue in dark, she gets struck in between those persons who are loaded with guns. They take her to Shyam in the same room. Shyam asks her how is she here. Khushi questions back Shyam that what is she doing here. She thinks that surely it has got something to do with those papers. Shyam denies and tells her that it was regarding the contract of our house that needs to be renovated and I was only talking to the contractor who has ditched me. Khushi warns him that as soon as Arnav is back, she would tell everything to Arnav. Khushi is very disappointed and leaves for the home.

When she reach back home Manorama comes and asks her where were she? She tells Manorama, that is not important. Let us once again collect everything and they conclude that Arnav is in Delhi only. Next day a courier man comes with a parcel for Arnav. Manorama is scared to receive that as they think there could be some evidence. But Anjali comes and receives it and open it to find that it had Arnav’s diabetes medicines. Khushi asks Anjali where these medicines could be available. Anjali tells her some names of the medical stores and also tells that she orders these medicines every three months.

Khushi and Manorama get a clue from this that probably the kidnappers would have purchased these medicines for Arnav. They decide to go to the medical stores to check out if someone recently has purchased those medicines so that they may get the details of by whom and when that medicine has been purchased. Manorama and Khushi keeps on collecting the information from various medical stores while Arnav is trying all his best to get released out of the chair. When someone looks at him, he acts like he is unconscious. In the night everyone leaves and only one man is left to look after him. That man gives Arnav his diabetes medicine and meanwhile Arnav manages to release himself.

Khushi talking to Mami that she has not been successful, Khushi saysthey should make a list of all the chemists and check, Mami tells Khushisince she is near her house she should stay there for the time being.Some store holder is asking money for the items. The buyer is scoldingthe shop owener and Khushi notices a tattoo on his hand and remembersthat she saw the same tattoo on CCTV, she follow the guy, the guysuddenly stops and Khushi tries to hide, he carries on walking andKhushi then seems to loose him, she is looking around and we see someonewith a rod behind her coming towards her, she is hit on the head and screamsPayal goes to the caf and waits for Akash there, she calls him but he isbusy with work and the phone is on silent, waiter comes for order butshe declines. Some random guy comes and sits down and he makes theexcuse that there are no other tables to sit, Payal says she is waitingfor someone and he replies that once the person comes he will leave. Theguy then tries to randomly talk to Payal and he asks her questions, Heintroduces himself and gives his hand to shake and asks for her name, hetries to flirt with her but she leaves.Khushi regains consciousness and is hurt and looks confused about whereshe is. ON the other side of the wall we notice that ASR is there. Onthe other side ASR suddenly feels the presence of Khushi (new rabba vesong) Khushi also senses him, they both touch the side of the wall andget flashback, Khushi thinks why does it feel like ASR is hereThere are some more flashbacks, they both look around, Khushi halts andcalls ASR and he halts and calls Khushi, he runs back to the wall andcalls her name, she does the same and calls for ASR, KHushi leansagainst wall and is crying. ASR tells her to look up there is aventilator, she notices it and tries to get something to stand on, ASRdoes the same and he tells her to be careful otherwise she will fall.They both look at each other, khushi puts her hands of the bars and ASRentwines his hands with hers (rabba ve in background) Khushi cantbelieve that ASR is there, he tries to console her, she says finally shehas found him, there is pain in both their eyes,. ASR says he is finebut Khushi says she knows that he isn’t and she knew that something waswrong, she says why he lied and didn’t say anything, ASR tries to tellher to stop, but she carries on. He says they will continue this laterbut he needs to break the grill first, but she doesn’t let his hand goHe asks if she wants him to go to her, she agrees, so he says they heneeds to break the grill, he states he is with her and near her butneeds to break the grill to get to the other side. She finally lets goof his hand, she tries to open, but he tells her to stop as she will gethurt and he will do itHe tells her to get down, but she doesn’t listen and wants to standthere, but then finally comes down, he tells her if she is okay and shereplies that she is. Khushi calls for him and he says he is right thereand he will break the grill and come to her. He is trying to break thegrill with no luck, someone holds Khushi’s shoulder and she thinks itsASR but it’s the kidnapper with food, she doesn’t want to eat so hethreatens her, ASR hears this and comes to the grill. He leaves andKhushi climbs back up, ASR asks if he hit her and she replies that inone way it was good as she was able to come here, he replies why shecame in the first place, he says what if something happened to her whatwas the point of taking the risk, Khushi is smiling and he shouts whyshe is smiling, she replies that its been so long since he scolded her,(there is a sweet rabba ve session) they smile and hold hands again,they have a staring session, he climbs down and gets a rope and passesit through to her. ASR says that how did she know he was in trouble,Khushi recalls the ‘I love you scene’