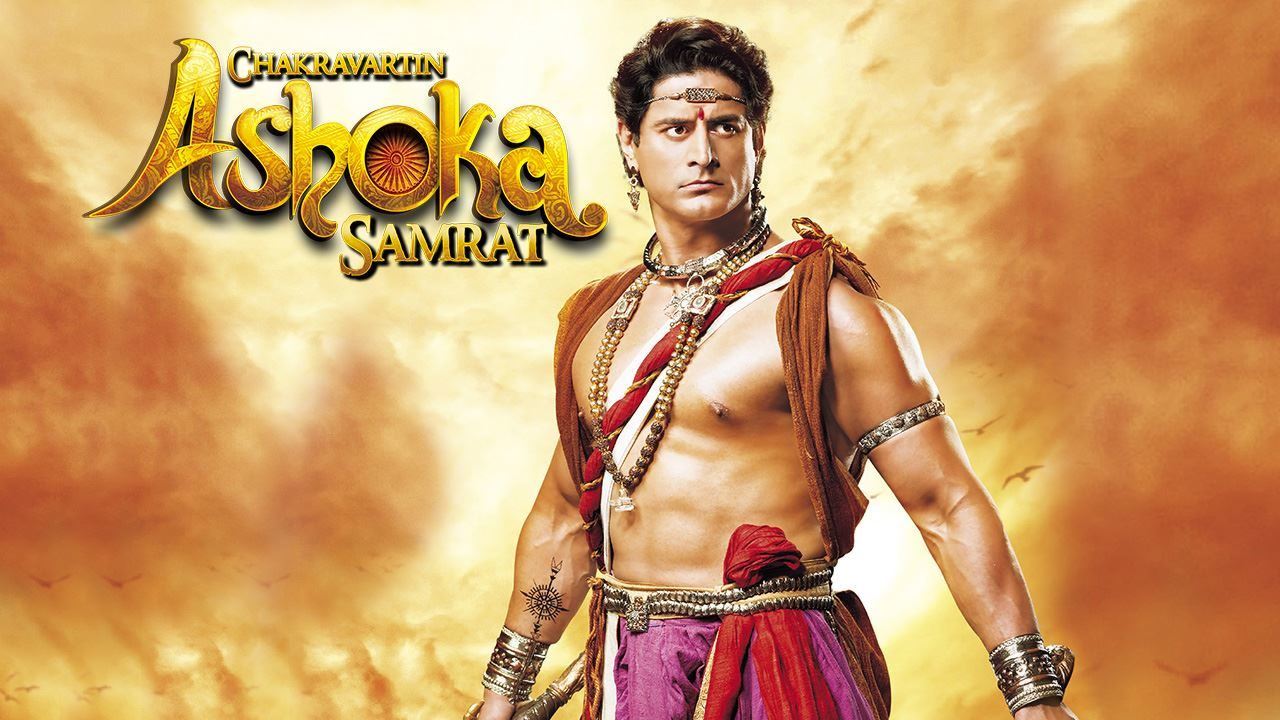 Purohit ji asks Kaurvaki to tell him the details of who she wants to do the puja for. She tells him everything. He is surprised. Everyone is doing puja for the royal family today. a lady just did puja for Samrat Bindu. Kaurvaki is sure it will be Rani Dharma only. Dharma is not there though. Kaurvaki gets sad. Dharma is standing right behind her. She leaves. Kaurvaki hears the sound of her anklets. She calls out after Dharma to stop. Dharma turns to look at Kaurvaki who smiles broadly. She recalls the childhood times. I stopped her but what will I say to her. She walks up to Dharma. Dharma recognizes her to be the same princess who gave food to her son that night. Kaurvaki nods. Dharma is happy to meet her again. I couldn’t thank you enough that day.

Kaurvaki says I am lucky to have found you. it is good to give food to hungry people. Their blessings always fulfil your wishes. My wish cannot be fulfilled without your blessing. Dharma blesses her. what can I do for you? Kaurvaki asks her to feed her. Dharma is hesitant. A princess is asking for food from an ordinary citizen. Kaurvaki reasons that she is at a place which is far away from her home and mother. One can eat as much as they wish but you always miss the food cooked by a mother. Bela seconds her. Dharma happily agrees. I wont be able to arrange such lavish food items. Kaurvaki says food cooked by a mother is always good. Dharma agrees. She tells her her address. My son will be happy to see you. Please come over tomorrow. Kaurvaki nods. Dharma leaves. Kaurvaki thinks her wait of 10 years is going to be over finally. No one can stop me from meeting Ashoka now.

Ashoka and Bhupal challenge one another for a fight. They agree upon the fact that whoever wins this competition can go to fight the competition in Nalanda. They start their wrestling match. Ashoka definitely has an upper hand on Bhupal. You are a great fighter. It is my wish that you win but what you think only as a competition is a medium to give a meaning to my life. It is a matter of life and death for me.

Dharma shouts Chand. Leave him right away. Ashoka lets go of Bhupal. She questions Ashoka on his act. What did you want to prove? Hari tells her how her son is thinking of participating in the competition which is going to be held in Nalanda. He wants to become the Maha Yodha of Magadh. Dharma is shocked. She slaps Ashoka. She apologizes to everyone. My son is too naive. He does not know he does not qualify for this competition. He has created a hindrance in your practise. I am sorry. She takes Ashoka and Vit inside with her.

Bhupal pays respect to a Mugdar (club – a heavy stick, usually thicker at one end than at the other, suitable for use as a weapon). Vit is confused to see him praying to a Mugdar. He asks Kaki (Bhupa’s mother) about it. Kaki says it is the symbol of strength. Bhupal’s father was a very great fighter. One day he threw it angrily on the ground. It got stuck inside the ground. No one could pull it out of earth since then. People believe it that no one can even move it out of the ground. If anyone is able to move it then he has been sent by God.

Bhupal seeks his mother’s blessings. Kaki makes Dharma do his tilak and puja as she is a married woman. A married woman’s blessing has more effect than others (she is a widow). Dharma does Bhupal’s aarti. Ashoka looks angrily at his mother. You should have done someone else’s tilak and what are you doing. You can do whatever you wish but it is in my destiny to end Sushim. It is in my destiny to fulfil the dream of united India. I will bring back peace and happiness in the lives of people once again. Only your swear was holding me back till now, but not anymore!

Mahamatya announces that the competition between a royal and ordinary citizen begins now. The match is between Bhupal and Sushim. Bhupal fails in hurting Sushim. Mahamatya laughs seeing it. Sushim tells Bhupal to try again. You are commendable. Bhupal fails in doing him any harm. Sushim stands rooted to his place, completely unaffected by any of his attacks. He holds Bhupal’s neck and beats him badly. Sushim keeps hitting him on his chest and makes him vomit blood. He throws him in the ground and buries his face in the sand for a long time. Sushim says Ashoka will also have to die this way. I sure we will come face to face really soon. Bhupal stops moving. Mahamatya announces Sushim as the winner. Sushim gets up. Bhupal looks at him. He (hinting at Chand) will certainly come. He will take revenge for my death for sure.

Nirankush is making Dhaniram pull the cart in which Devi has been jailed. He hits Dhaniram with a whip. Devi shouts at him. please don’t hurt my father. nirankush laughs. What if I touch you then? Dhaniram pleads him not to do anything to his daughter. Nirankush talks to someone who will teach him a lesson. You have made people your servant. Now you will become my servant. Entire Ujjaini will see what will happen with your daughter. Devi gets scared.

Kaki says I will distribute sweets in Rajgir when Bhupal will come back as the winner. Vit comes and takes some ladoos. I cannot wait anymore. Dharma smiles. He has gone after his brother. She stops as she was about to say Ashoka. Chand too was like him when he was a kid. He too couldn’t resist ladoos.

Garud neighs. Ashoka tells him to stop but Garud neighs again. Ashoka looks at him. He notices a few men brining Bhupal’s dead body. A man shares that Bhupal couldn’t withstand Sushim. He attacked Bhupal in such a barbaric way that Bhupal died. He goes. Ashoka feels helpless. Another person lost his life because of that devil today yet I couldn’t do anything!

Kaki cries seeing her son lying lifeless before her. All the citizens are in tears too. Vit hugs his brother as he is scared.

Bindu takes aarti and Prasad from Shubhrasi. He is going to Nalanda. Sushim has done something good after years. He has organized a wrestling match and included citizens in it. I think I should go there to encourage him. She says I feel the same way. Your presence will give strength to your beloved son there. Charu walks in. Shubhrasi excuses herself. Charu is happy to see Bindu going to Nalanda. Sushim will be so happy. He may be tough but his heart is filled with love and respect for you. he cannot express it. He wants to be like you to help the citizens and Maurya lineage reach new heights. Bindu says I know my son well. You don’t need to tell me about him. He leaves. Charu is irked. Those people did leave Magadh but they still have a place in your heart. I don’t like it! Time has come. Ashoka will shed more blood than the amount of tears I have shed. My son has created such a trap for your son this time that he will surely die. My Sushim will sit on Magadh’s throne then. It will be made final with Ashoka’s death.

Dharma says I am also sad by Bhupal’s death. I too feel sad for Shanti but your motive isn’t right. I am afraid of your aggressive behaviour. Don’t expect me to allow you to participate in any fight or competition till you learn to control your anger. I cannot allow you to ignite your anger again which I have managed to do in these years with a lot of difficulty. Ashoka reasons that if he does not go then Hari will go. Kaki will lose her other son too. I wont let it happen. Never!

Kaurvaki is getting ready. Bela says you are getting ready since morning. She teases Kaurvaki on her beauty. Rajkumar wont be able to look away from your face. He wont care about your dress up or anything. Kaurvaki smiles. Bela tells her to hurry up. What if Rajkumar heads to some other place before you reach there? She puts a kala teeka behind Kaurvaki’s ears. Kaurvaki asks her to pray that she finally gets to meet Ashoka today. She goes. Bela prays for her.

Mahamatya says what if he wont come before us. He would have come by now. I am keeping an eye on all the participants. No one is even close to him. Did he actually turn into a mouse by running away all these years? Or he might have gotten to know about your strength and have given up on the idea of taking revenge from you? Sushim replies that people who think from mind change their decision as per the situation. Ashoka thinks from heart. I am sure he will come this time to die by my hands. He angrily hits at the wall. A crack appears. Mahamatya looks scared.

Hari refuses to let Ashoka go there. Sushim is my culprit. He has killed my brother. Only I have the right to take revenge. I might die but wont give up. Ashoka tells him not to be emotional. What if something happens to you? Think about your mother. Hari knows his mother is not weak. She has lost her husband and her son here only. It is about Rajgir and its pride. Ashoka understands and respects his emotions but knows that no one can withstand Sushim. Hari asks him if he will be able to do it. No one could do it even after practising for many years. Will you?

Ashoka looks at the Mugdar. He decisively walks up to it. I am sorry to do it. I have to showcase my strength to save your (he says it to Bhupal’s father) son. Everyone looks at him in awe as he pulls it out of earth in one go. He hits it back in the ground. Everyone gathers around him. It has gone deeper than before. They all kneel down before him and fold their hands. Kaki comes there too. God can be upset with the poor but will not leave us. I am sure you will take revenge for my son’s death. You will get him justice. Dharma agrees. Not Hari but my son Chand will go in the competition now. Ashoka is thrilled. You have allowed me to go? You are allowing me to take revenge for Bhupal’s death? She nods. He hugs her. Ashoka thinks I am really happy. you have begun the end of the tapasya of 10 years now by agreeing me to go there.