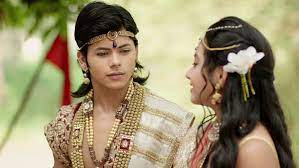 Episode 250
Ashoka is determined to destroy Keechak and save his people!

Episode 251
Keechak decides to kidnap all the kids with the motive to find Ashoka! Ashoka hides his identity and joins the kids in order to rescue them.

Episode 252
Keechak finds Ashoka! What will Ashoka do?

Episode 253
Devrath reveals, in front of the rebels, that Ashoka is a prince. How will they react? Kaurwaki overhears this conversation and is shocked!

Episode 254
Kaurwaki decides to stay away from Ashoka and leaves!

Episode 255
Dhananjay decides to collect heavy taxes from the people so that they have no money to support Ashoka.

Episode 256
Dharma intentionally speaks about a plan in front of Helena to see if Helena is indeed a traitor.

Episode 257
Kaurwaki escapes with her father but the guards see them and chase them. Will they get caught?
Monday 7 March 2022

Episode 258
Rakshas forces Kaurwaki to choose between her father and Ashoka!

Episode 259
Charumitra makes Dharma trip by dropping oil on the ground, when she gets to know that Dharma is going to meet Badhrabhat.

Episode 260
Ashoka saves Kaurwaki from Keechak’s men, but all the rebels look suspiciously at Kaurwaki. Will she betray Ashoka to save her father?

Episode 261
Kaurwaki meets Rakshas who asks her to inform them about Ashoka’s next move.

Episode 262
Dharma is shocked when she gets a note telling her to quit digging up the past, but the ink vanishes which leaves no proof for her to show to the King!

Episode 264
Kaurwaki goes against Rakshas and decides to save everyone, however, Rakshas knew that Kaurwaki would do that and that in itself was his plan!

Episode 265
Kaurwaki meets Ashoka who is horrified and raises a sword in front of her as he feels that the rebels have died because of her!

Episode 266
Keechak is celebrating his victory when Kaurwaki enters and Keechak decides to punish Kaurwaki and her father for her betrayal.

Episode 267
Ashoka reaches the palace and uses Agnibahu to fool Keechak by showing him a locket that can make a person live forever! Keechak decides to send him to Dhananjay with the locket.
Monday 14 March 2022

Episode 269
Ashoka visualizes Chanakya and Akramak who motivate him to fight back! Even when Ashoka cannot see properly he manages to fight with his eyes closed as taught by Akramak.

Episode 270 Part 1
Sushim gets to know that Ashoka is still alive and looks horrified! Meanwhile, Ashoka’s health deteriorates and the doctor loses all hope of Ashoka surviving.

Episode 270 Part 2
Keechak decides to tie Kaurwaki and hit her, to show the villagers what happens when they go against him and he also hopes that Ashoka will arrive to try and save Kaurwaki.

Episode 271
Dharma is devastated to find out about Ashoka’s condition.

Episode 274
Keechak decides that he will kill Ashoka’s mother in order to weaken Ashoka.

Episode 275
Ashoka finds out that his mother is pregnant. How will he react?

Episode 276
Ashoka fights Nayak in order to save Kaurwaki. Who will win?
Monday 21 March 2022

Episode 277
Dharma manages to escape from Keechak but is all alone. Where will she go now?

Episode 278
Devrath is panicking after realizing that Dharma is missing. Will they find her?

Episode 281
Kaurwaki tries her level best to motivate a devastated Ashoka but it seems of no use.

Episode 282
Keechak prepares to kill Dharma. Will Ashoka save her?

Episode 283
Bindusara is happy to know that his son is alive and decides to leave for Takshshila.

Episode 284
The battle between Ashoka and Keechak begins! Who will win?

Episode 285
Bindusara brings Dharma and Ashoka back to the palace on a chariot.

Episode 286
Dharma notices that Ashoka and Kaurwaki are falling for each other. Will she embrace Kaurwaki or turn into the evil mother-in-law?
Monday 28 March 2022
Episode 287

Ashoka asks Bindusara to make him the heir to the throne!

Episode 288
Sushim cries and whips himself in order to get his father to change his mind and make him the crown prince!

Episode 289
Ashoka gets ready in the royal dress for his coronation as the crown prince of Magadha!

Episode 290
Sushim is determined to get rid of Ashoka and makes it seem like Ashoka is trying to hurt him!

Episode 291
Dhrupad sees Siamak coming from a secret room! What is he up to?

Episode 292
Ashoka reveals to Bindusara and Dharma that someone from the palace has killed Chanakya. Sushim creates doubt in Bindusara’s mind by saying that it could be Ashoka who killed Chanakya!

Episode 293
Sushim reaches the top of the mountain and meets the occult who makes him hallucinate!

Episode 294
Sushim hands powder to Charumitra and asks her to mix it in Dharma’s drink because the powder will make Dharma hallucinate and kill Bindusara! Will Sushim have his own father killed for power?