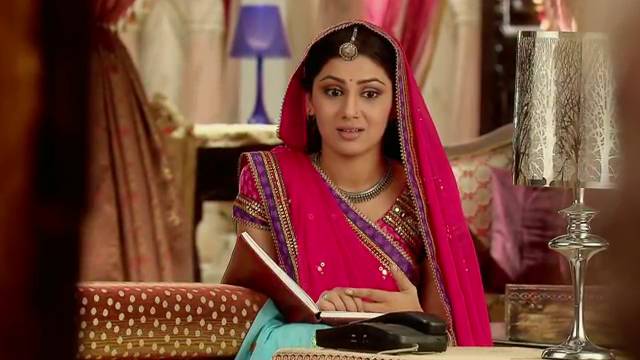 Anandi tells Dadisa you could have stopped Ganga for Mannu’s sake at least. If anything like this had happened with me, then would you be able to take it? Dadisa nods her head to say no. Sumitra says to Anandi, why are you talking like this about you? Anandi says, because of your mother’s love, you can’t even hear this about me.. then why didn’t you think about Ganga despite being a mother? It must have been so difficult for her to give her child to that devil, but she still got ready to do that to save this family. Everyone is quiet. Anandi now asks Jagya to tell what happened. She says, you brought her to this house and took Ganga and Mannu’s responsibility, right? And you too couldn’t stop her? Jagya too is quiet. Anandi gets up and asks Shiv to leave from there as they won’t get any answer, but silence. She walks off. Shiv takes blessings from Dadisa and leaves.

Outside, Anandi tells Shiv, I would have reacted and felt same way even if it was not Ganga and someone else. Ganga almost became part of this family.. everyone was taking advice from her. This family took care of her so much and today they didn’t even try to stop her. I want to know why. Jagya comes there and says, I also didn’t get that. I don’t get what happened to everyone all of a sudden. I couldn’t say anything inside, but you two will have to come with me to know why I stayed quiet.

Inside, Sumitra is crying and says, I just thought about our family’s good. What did I do wrong? Anandi got up and left. Does anyone behave like this with their mother? She asks Dadisa what she did wrong. Bhairo too gets up now and leaves from there. Sumitra says, everyone is blaming me. Jagya is angry. Anandi left, and he (Bhairo) too thinks I am wrong. Is there anything wrong to think about own family? Dadisa consoles her and says, no one is blaming you. Everyone is just shocked and scared after yesterday’s incident. In few days, everything will be alright. Sumitra hugs her and cries.

Jagya brings Anandi and Shiv to some place. Anandi says, hospital staff lives here, right? why did you bring us here? Jagya says, you will find out soon. They go to a room and Anandi and Shiv are surprised and happy to see Ganga and Mannu there. Ganga and Anandi hug. Both are crying. Anandi asks her, why did you leave Haveli? Do you know how worried I was? You should have at least thought that all that Jagya and this family did for you.. would go for a waste with your this one step. Do you know what it means to break relationship with everyone and leaving like this? It shows that you’re telling everyone.. you all helped me for no reason. It was not needed for you to fight and stand against Ratan. You should just have accepted your defeat. Ganga nods her head to say no.

Anandi continues, everyone wanted better future of you and Mannu and that is why they kept fighting against Ratan.. and what you did? Left house with Mannu to invite more troubles? You know right even today how difficult it is for a woman to live alone and raise her child? There will be thousands of Ratan Singh to take advantage of women like you. With how many will you fight? And how will you fulfill your dream to give better future to Mannu? Tell me. Ganga says, I have thought about all that you said thousands of times, but still I decided to leave Badi Haveli. What else could I do? There were problem after problem and I just couldn’t stay there. I didn’t have any other choice. What did I return to that family for all that they did? Just pain and troubles. Anandi says, answer to my one question.. did you leave Haveli by your choice or you were afraid that everyone will blame you after yesterday’s incident?

Ganga says, it was my own decision. They all are very nice people. All got golden heart. They can’t even think about blaming someone like this. But I also have some responsibilities toward that family. That is why I decided not to give them any more troubles because of me and I left that house so.. Jagya says, so? So along with you, you can risk your child’s life as well? everything over in one shot… which you went to do last night? Shiv asks meaning? Jagya says, before I reached house, Ganga had already left with mannu. And when I went to find them..
Flashback scene
A truck is coming towards Ganga and she is lost in thoughts. She screams when she realizes a truck is coming to her. Jagya comes on the last moment and pulls her and Mannu on a side.

Back to present, Jagya continues, she had no clue about what’s going on around her. She couldn’t see vehicle coming towards her. It’s good that I reached there on time.. else…

At Haveli, Sumitra tells Dadisa and Basant that Sugna’s family has invited them for a function tonight. Dadisa says, we should be going as invitation is from Sugna’s sasural, but don’t have any strength to go anywhere. Sumitra says, they will be living in some other village.. so who knows when we will get such chance again. Basant says, it will be better for them to live where Shyam gets work. Sumitra says, that is why I am saying.. this way we will meet everyone and Sugna and children will like it as well. She asks Dadisa what to tell them. Dadisa tells her to say yes.

Shiv tells Ganga, this was not right.. if anything had happened to you or Mannu, then Jagdish and his family would be blaming themselves. You want to end problems for them, but here you’re hurting them even more. And Jagdish would be most guilty because he couldn’t stop you. Ganga is crying. Anandi wipes her tears. She tells her, forget whatever that’s happened. You’re not responsible at all for what Ratan Singh did.. now let’s go back to home. Ganga says, no and looks at Jagya. Jagya says, I brought Ganga here and I haven’t told anyone about this. Ganga won’t go back to that house. Anandi asks, why are you saying that? Is there no place for Ganga in that house? Till how long you will hide her from everyone? They will find one day.. then what will you say? We have to take a straight forward way instead messing things more. Ganga should go back to Haveli. I will talk to everyone. Jagya says, No Anandi.

You won’t talk anyone about this. I also know that I can’t hide that Ganga is staying here, but Ganga is my personal responsibility and it will only be fulfilled when Ganga takes full training of a nurse and become independent. Until that day doesn’t come, Ganga won’t go back to home. Ganga is looking at Jagya while he says all that. Anandi looks at Shiv and he gestures that this is right thing to do. Anandi tells Jagya, may be you’re right.. forgive me.. I got angry at you without listening to you fully. I know very well that you will never let anything wrong happen with Ganga. Even after that I couldn’t believe my faith and don’t know what all I said to you. It’s a very good thing to support a woman to make her independent. I hope our family realizes their mistake and they come and take Ganga back.

Gehna is bringing Nandu to the hall. He remembers the incident and doesn’t want to go there. He’s very scared. Gehna asks him to sit with everyone. Nandu says no and says he wants to stay in his room. Basant comes to them and asks what happened. Gehna says, he doesn’t want to come out of his room. His friends came to call him to play, but he didn’t go with them either. Basant says, I know why he didn’t go to play. He carries him and says, he wants to play with his dad.. that’s why he didn’t go. He takes him to the hall. Dadisa says, the boy is scared. Dadisa calls him to her. She says, we all are here with you. And whatever happened yesterday was very bad.. but now all bad people are in jail. Now no one can even dare to touch you. she tells him, tonight we all are going to your sugna jiji house.. there you can play a lot. Nandu agrees. Dadisa tells Basant, I don’t think we should take Gehna in this condition.. you stay with her.

Ganga tells Anandi, I didn’t even ask you for water. Shiv says, it’s okay.. we have to leave for Udhaipur now. Anandi tells Ganga, I have told you before as well and telling you again.. if you need any help, then you can tell me. She looks at Mannu and tells Ganga to take care of him. Both hug. Anandi then kisses Mannu and her and Shiv leave. CONTINUE READING NEXT PAGE 2 BELOW