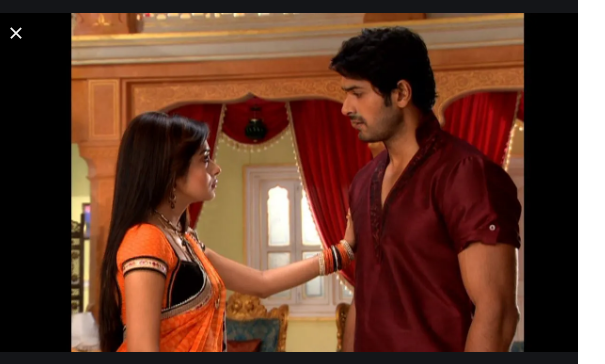 Vishnu/Meethi romantic scene. Vishnu says to Meethi, something happened between the two of us in these past few days. I didn’t burn myself but I made one name forever mine… he shows her “Meethi” written on his hand (looks like written with a knife).
Meethi says, why did you do it? He says, do I need to answer your ‘why’?
Meethi says, you’re a liar, a deceiver.
He says I didn’t lie to you, I just hid a truth from you… would you punish me so much for that?
Meethi says, it’s a big truth. That you’re a criminal!
She turns and starts walking away from him when he yells “I Love You” and she stops…
He says I love you and only you… I’m sorry Meethi.
Meethi smiles at his words, and then cries… but doesn’t turn around… just goes away.
Vishnu is hurt too. He looks at Meethi’s name on his hand.

Jogi standing on his balcony when Icha walks up to him and says you’re missing Tappu?
Jogi says, for 19 years all I had was memories… but was there any place in Tapasya’s memories for her old parents?
The family who’s grandson insulted her daughter, did she have to go and marry in the same family?
I understand that she didn’t know her daughter was with us for all these years, but wouldn’t she have seen the news? Mukta Rathore, wouldn’t she have recognized the name.
Icha says, there’s some reason that she has done so.
Jogi says, just to hurt us.
Icha says, no she wouldn’t have done so… she would never hurt you… My heart says there’s a reason for her actions… otherwise why would she come back after so many years?
Icha says, I can’t call her without your permission, but can’t you call her yourself if I ask you to?
Jogi says, no I won’t call her. Why should I? She came back after so many years… did she bother calling even once and asking about her old parents?
OK I agree she wouldn’t know how to come in front of her parents after so many years… I would have gone to her myself… but what did she do right after coming back? Marriage with Tej Singh Bundela? She ruined our family’s name… I won’t talk to her Icha… even if I come face-to-face with her, I won’t talk to her.
Jogi leaves angrily and Icha cries…

Tapasya comes up to Daddaji’s photo again and thinks about bluffing Chanda with the wrong tape and Chanda saying “Daddaji” in nervousness.
Tapasya sees Kasha doing something on the dining table and she goes up to him.
She tells him the oil in Daddaji’s deeya is running out…
Kasha says, he will put some oil in it.
Tapasya says, I feel bad that I wasn’t able to see him at his end…
Kasha says, death always comes so suddenly.
Tapasya says, he brought you up from childhood, right?
Kasha gets emotional.

Tapasya says what happened to him? Was he very sick?
Kasha says, he had a heart attack. He was even getting better… but suddenly one morning, the mask on his mouth was removed and he left us. Kasha remembers Daddaji’s death.
Tapasya says, if the mask was removed… the doctor/nurse who was present didn’t they say anything? Kasha says, the doctors said maybe Daddaji himself removed the mask at night… and then he left us.
Kasha starts crying… Tapasya says, I’m sorry Kasha Kaka, I didn’t want to hurt you. Did Tej Singh used to live with you those days?
Kasha says, he used to live with us those days, but at that particular time he wasn’t in the house… because Lalla had kicked him out of the house… if he was there then…
Chanda interrupts him and says, Kasha Kaka, Mausi is calling you for so long and you’re chatting up with her over here?
Kasha leaves.

Chanda tells Tapasya, you deceived Tej Singh and married him, but remember one thing… no one likes you interfering in this family’s affairs…
Tapasya says, I saved your life… and you’re talking to me like that?
Chanda says, you may have something to gain from that as well.
Tapasya says, yes, I do. Now my only selfish reason is the betterment of this house, this family.
Can I ask you one thing? The day Daddaji died, where were you that day?
Chanda is shocked and goes quiet… Tapasya says, tell me… don’t you remember?
Chanda ignores her and leaves.
Tapasya says, your quiet is saying a lot Chanda Didi and I have to find out the reason for this quiet.

Meethi comes to her room and cries. She remembers Vishnu yelling I Love You to her.
She says, why does it always happen with me? Why?
Song in the background – she keeps crying.

Tej drinking in his room when Chanda comes there. She says, all you have to do is drink and be unconscious. Do you know what’s happening in the house? (Tapasya comes to the door to overhear their conversation).
Tej says, what happened?
Chanda says, that Tapasya is inquiring about Daddaji’s death.
Tej says, Bhagwan made a mistake while making a woman. He didn’t give her a brain. Let her spy as much as she wants… I’ve burnt the proof now.
Chanda says, don’t take all women to be fools.
Tej says, don’t ruin my mood… already I’m going crazy. Get my some more whiskey. Chanda picks up the bottle and says this is not the bottle I brought. He says, then who brought it? She says I don’t know, must be an old one. In any case, I’m not the one to feed a poisonous snake. My job was to tell you, the rest is up to you.
Chanda leaves the room. Tej drinks more alcohol.
Tapasya says, and I want this snake to get totally drunk today. Drink as much as you like Pati Parmeshwar ji.

Veer on an armchair in his room and thinking of meeting Icha for the first time in Satara jail.
Amla comes with a tray and he says Teacherji. Amla stops at the name, but then brings the soup to him. He says thank you and starts eating the soup. He makes a face after first bite and Amla asks you don’t like it? Veer says, there’s a lot of black pepper in it, I don’t like it.
Amla says, I haven’t been able to find out your likes and dislikes yet.
Veer says, doesn’t matter.
Amla says, can I ask you something? Were you missing Teacherji? I heard you calling her name just now.
That day when Mai sent me back from the hospital, Teacherji came to see you in the hospital… if you want to talk to her, you can do so, I won’t tell anyone.
He asks where’s Mai? Amla says, she went somewhere suddenly.
Veer says, thank you. Amla says, I’ll bring another soup with less black pepper for you.

Gunwanti at a place and the other person says, why are you here so suddenly? You should have called before coming.
Gunwanti says, I had to come without informing Doctor sahab because Lalla was in the hospital. Give me the medicine quickly.
Doctor says, you’re taking the medicine for the last 18-19 years… and you know that what I’m doing for you is the wrong use of my knowledge. If someone sees you or finds out…
Gunwanti says, don’t worry about that… I will look after it. Just give me the medicine quickly.
He brings a bottle.
Gunwanti says, since Lalla went to the hospital, I am worried his memory might return. Now give me a medicine that doesn’t let his memory come back. Here’s the money… I don’t want anything from his past life to come back.

Gunwanti getting the medicine from a doctor to keep Veer’s memory from returning. She gives the doctor some money and asks for a medicine that never lets Veer regain his memory. She says, you know whatever I’m doing it’s for my son’s good. I don’t want Icha to come back into his life.
Doctor says, I’m giving you the medicine, but this is not a medicine that will prevent his memory from coming back forever… and you have to look after his health.
Gunwanti says, he’s been having it for so many years… when nothing happened so far, you don’t worry – nothing will happen now. I will look after him. She asks if I can give it to him twice a day because when he was in the hospital I couldn’t give it to him… the doctor gives her more.
Gunwanti takes the bottle and thinks, Icha I won’t let you come back into Veer’s life.

Meethi remembering Vishnu’s words about loving her. Mukta comes to her with a tray of food. She says, you didn’t have food, so I brought some for you. Meethi says, I don’t feel like it. Mukta says, who are you so upset with? Meethi says no one.
Mukta says, oh, so it’s anger on your boyfriend.
Meethi says, what are you talking about… I don’t have a boyfriend.
Mukta says, I saw everything in college today… the one who was ready to commit suicide for you.
Meethi says, he was pretending.
Mukta says, then why this anger?
Meethi says, he’s a liar and I don’t like people who lie and deceive.
Mukta says, Meethi sometimes you have to hide the truth until the right time and opportunity comes.
Meethi says, you don’t even know him, but you’re still favouring him… Not bad.
Mukta asks her to look in the mirror, holds her shoulders and says who am I with now? With you, right?
Meethi has tears in her eyes.
Mukta says, now look at me… Seeing these tears in your eyes I can tell you’re missing him. Love doesn’t happen again and again, it’s very difficult to get it… so don’t lose it.
Ask your heart, what it wants…
Mukta leaves the room and her words echo in Meethi’s head. She smiles with tears in her eyes.

Gunwanti comes in the kitchen and asks the servant in the kitchen to go get the stuff from the car to her room. The servant leaves the kitchen. Gunwanti puts the medicine in a glass of milk and hides the bottle. She leaves the milk glass in the kitchen and goes in her room to hide the medicine.
Amla comes and looks at the glass of milk… she thinks what’s this glass doing here? She drinks it.
Gunwanti comes back and asks for the glass of milk… Amla says I thought it was going to waste so I drank it.
Gunwanti gets upset and says why did you have to drink it, I was making it for Lalla.
Amla says I’ll make another one for him. Gunwanti asks her to bring one more quickly.