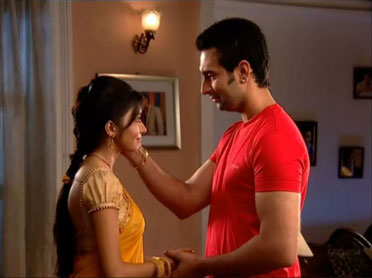 Veer asks Ichha that whatever she told downstairs ,if its true then why did she hide it from him for so long on which Ichha tells Veer that she wanted to tell him about it but she was scared that he will feel hurt about it and so she kept quiet but she had no intention to hide this fact from him ;Veer is devastated and comes downstairs and tells everyone not to say anything to Ichha as its their personal matter and if Ichha had said something then mayb there is some truth in it and so he will himself find out the truth by doing the test ;Tappu is scared now Tappu in the balcony wonders what if the test reports come positive and she gets exposed in front of all ;Nani comes there and tells Tappu that finally they can celebrate since very soon Ichha’s lies will come in front of all after the test reports and she will b out of this house ;Tappu is still looking worried when Nani gets a doubt and asks her whether she is hiding anything from her ;Nani further tells Tappu that in case she is hiding anything then its better she tells her the truth because only her Nani can get her out of any mess ;But Tappu does not tell anything to Nani but just tells her that she will tell her everything when the right time comes but right now she is all fine.

At Jogi’s house ,Pushkar continues to brainwash Divya against Damini and her ways of domanting everything in this house and taking away her rights slowly when Divya tells Pushkar that once Jogi comes back,she will speak to him about it on which Pushkar gets a sadistic pleasure of taking advantage of the situation ,.. At Bundela house ,Ichha gets a letter written by Veer which is kept in the room in which Veer has apologised to Ichha for going out without letting her know about it and he has also written that even though he trusts her words but in such cases ,he himself wants to face the harsh reality of his life by doing the test again and so she should not think that he is not trusting her and so doing the test again since he is doing this test to himself face this harsh reality ;Ichha understands Veer’s pain and feels bad about it Ichha goes to meet Tappu in the balcony and blasts her for getting sadistic pleasure after lieing to everyone and seeing everyone in pain on which Tappu too hits back at Ichha by telling her that how can she blame her this way when she has been pregnent without any marriage tag and is facing all the issues because of this ;Both Tappu and Ichha hv similar arguments once again when in the end Ichha tells Tappu that she will always remain selfish since even now she doesn’t care about Veer’s pain but all she cares is to make sure that her lie is not exposed in front of anyone.

Ichha-Tappu in a war of words where Ichha makes it clear to Tappu that she will b really happy if Veer’s test results come positive and she is proved wrong because what matters for her is Veer’s happiness and in no way a test result can affect their relationship because Veer trusts her since their love is not one-sided .. Umed is all tensed when Gunwanti comes there and bashes Ichha in front of Umed on which Umed tells Gunwanti not to bash anyone right now because their son Veer needs all the prayers ;Umed further tells Gunwanti that if Ichha is proved wrong then Veer will never be able to tolerate this lie of Ichha and if she is proved right then Veer will never b able to come face to face with Ichha and so in both cases their son only will have to suffer ;Both Umed and Gunwanti pray for Veer… CONTINUE READING NEXT PAGE 2 BELOW