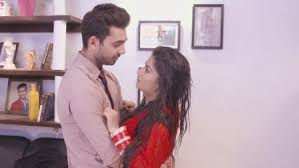 25th January Friday Update On This Is Love

Aaliya crying. Adi comes and hugs her. She asks how did you come soon. He says I came from midway, it was not your mistake, your friend took advantage of your goodness, Dadi is also fine now. She asks did you talk to Raman. He says no. She asks him to go home. He says don’t get sad, I m here with you. He gets a call and says no, its nothing like that, this project is also imp to me, I had to come for some family project, I will meet you in office. He apologizes to Aaliya and says I have to go office, I will come soon, all my time will be yours. He leaves.

Raman says I know its wrong that Adi came here like this. Taneja says I know police arrested you, who will like to work with you and your son. Raman says get your facts right, I was not guilty. Adi comes and
asks Taneja to mind his language, how can he talk to Raman like that, real culprit is caught, your reputation won’t suffer.

Ishita says Aaliya, I know its not your mistake, but friends are imp, our friends show what kind of person we are, Shrishti feels you agree to her drug dealing. Aaliya says trust me, my friends are not such, I did not know about Shrishti. Ishita says you can’t take their guarantee, you are not able to judge your friends, drugs is a big deal, but she did not feel guilty, you have to be careful about friends, its better to have less friends than having bad friends, don’t worry for Raman, this time he will take some time.

Taneja asks what shall I do if Adi’s Dadi is unwell, I got to know Raman has put 10% workforce in his new project, is this true. Raman says yes, but it won’t affect your project. Taneja asks Adi to tell him if he can handle this project, else there is no less talent in market. He goes. Adi asks Raman why did he not tell him about taking workforce. He goes.

Raman comes to Adi and asks him to read file, check figures. Adi says Taneja told this to me, you should have told this. Raman asks did I have time, mum got unwell and then I got arrested, thanks to your wife. He says don’t hide your mistake by blaming her, Taneja said he will make me out of the project, don’t spoil it by your ego. Raman asks do you think so. Adi says yes, I got this project on my own. Raman says enough.

A guy asks Ishita is she Ishita Bhalla. She says yes, who are you. He says you got my girlfriend arrested. She asks Shrishti, sorry, my husband was arrested for her mistake. The guy says now see how I free her by your help, sit inside. She says no, sorry. She gets hurt by the knife and screams. Shagun hits on his head. The man falls down. Shagun asks Ishita is she fine. Ishita thanks her.

Raman gets a call from Mihika. He asks what, is she fine. Adi asks what happened. Raman says someone attacked Ishita. They leave. Ishita tells everything to police. Mihika does the aid. Raman asks Ishita is she fine. She says yes, I m fine, Shagun saved me. Inspector says don’t worry, that man is in jail. Raman asks who was that man. She says Shrishti’s boyfriend was taking revenge. Raman asks Aaliya to see, where is her responsibility, Taneja was going to ask project back, how will this affect company reputation. Ishita and Shagun ask him to stop it. He says this is my house, she is my bahu, I have right to scold her, she has to learn. Shagun defends her. Raman asks does she not have sense to know people. Adi says please just once… Raman says enough, why does anyone not tell her. Shagun says fine, she is senseless, I will take her home.

Ishita stops Shagun and says don’t drag this. Shagun says I can’t see this, Aaliya does not deserve this. Aaliya says its a small thing. Shagun says its your insult. Aaliya says no, Raman is like my dad, he is like Mani and has right to scold me. Ishita says I m proud of you, she understands us, she is like Adi and Ruhi for us, she knows leaving home is not a solution. Raman says sorry Aaliya, just realize the duties of a bahu. Aaliya says don’t say sorry, I will be careful. Shagun says I guess I should leave. She leaves.

Adi hugs Aaliya. He says I felt you will leave, please don’t leave me ever. She says I will not leave you even if you want, I just have one husband. He says even I have one wife, I will always stay with you and take care of you. He hugs her. Ishita and Raman knock at the door. Raman asks do you think I don’t love and worry for you. Aaliya says no. Raman says sorry, I have hurt my dear ones by my anger, I lost my cool knowing all this, I care for them a lot. Aaliya asks about Adi’s project. Adi says nothing, Taneja is impressed with me, I will manage. Raman says thanks, you made a good presentation. Adi says you have all love to bahu, not me. Ishita says we love you. Raman asks Ishita to take care. They go. Adi hugs Aaliya and says now everything is fine, smile. They smile.

Mrs. Bhalla asking Mr. Bhalla to take her out, else she will go alone. Amma asks Appa to take her out. Mr. Bhalla agrees to take Mrs. Bhalla. She says I love you Bhalla ji, I will rest till evening. Amma says you don’t take me for movie, you don’t love me. Appa says I love you, there is no good Tamil movie. She says hindi will work for me too, take me out. He agrees to take her. She says you are so cute, I will make your fav dish. He says why does she want to see movie today, what happened to her. He goes. She calls Mrs. Bhalla and says work is done. Mrs. Bhalla says good, we will meet in evening. Amma says yes, we will make them patch up.

Aaliya says I have set my room like my old one. Shagun says good, but I called you to warn, don’t lose your identity. Aaliya says please just stop it, Raman is not such to suppress me, he was angry on your words, he realized and said sorry to me. Shagun says if you give them chance, they will ill treat you, they treated me badly too. Aaliya says its my mistake too, I have to change after marriage, Raman could go jail, it was really serious. Shagun asks did Shrishti’s parents get her out. Aaliya says no, her Papa is very upset, don’t worry, everything will be alright.

Raman jokes and gives juice to Ishita. She says I will get spoilt this way, let me enjoy this, its tasty. He says don’t tease me, else I will become like before. She says no, I feel like coming in heaven, you said sorry and thanks to Aaliya. Romi calls him. Raman says keep your doubts separate, I know Kiran’s factory capacity, sign contract with him. Ishita asks what happened. He says I know Kiran, he is ambitious, this project can complete with his company. She says I hope Raman and Adi’s project completes.

Adi talks about work. He sees Aaliya and ends call. He romances. She says its dinner time, I have to prepare, leave me. He stops her and says anyone else will work. She says Dadi is unwell, I have to cook. Neelu calls her. Adi asks her to think about him. He stops her and hugs. Mrs. Bhalla and Amma come home and see them. They smile. Adi leaves Aaliya. Aaliya goes to kitchen. Adi goes back to his room.

Its morning, Raman asks for breakfast. Ishita gives him food. She says Mrs. Bhalla is sleeping. Raman asks Aaliya to take care of Ishita. Adi says I need to talk about Taneja. Raman says office talk in office, not at home. Raman gets a call and gets shocked. He asks what’s Shagun’s problem, she did Shrishti’s bail, don’t know why, what’s her agenda. Ishita asks are you sure. Raman says inspector called and said this. Aaliya thinks why did mumma do this. Mr. Bhalla says Shagun did limit, we are forgetting things and moving on, I think she has poison in her mind. Aaliya says maybe she has some reason. Raman says what can be reason to harm own family. Adi says mumma should have not done this, Papa was getting jailed, I will not help anyone such who hurts my family. Ishita asks Mr. Bhalla not to tell anything to Mrs. Bhalla. He asks her not to worry.

Ruhi says I got something for you, you will be very happy. Raman asks what is it. Ruhi says they signed our contract, I was excited and came here directly, they were very happy seeing our project. He says this is the best thing, thanks, go home and take some rest, I want you to handle this project, so proud of you. He hugs her. Mr. Bhalla ask Sukhdev to file the tender, I took help from Ishita, she won’t tell anyone. Sukhdev thanks him. Shekhrand hears this and says they are giving bribe, I have to tell this to Mr. Iyer.