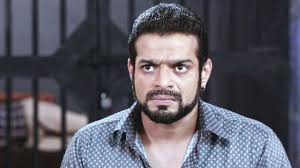 24th January Thursday Update On This Is Love

Mrs. Bhalla asking everyone to be happy that she got fine. Ishita asks her to take rest silently. Mihika says yes. Aaliya comes. She apologizes for her mistake. Mrs. Bhalla says its none’s mistake, I have asthma, stop crying. Raman says thanks Roshni, you came on right time and saved mummy’s life. Roshni says its fate I came on time. He says no, some people don’t understand duties, if anyone emergency happens at home, who will be responsible. Ishita asks Mrs. Bhalla to rest. Aaliya apologizes to Raman. They all go. Mr Bhalla gives warning to Mrs. Bhalla to take good care of herself.

Aaliya says I should have not gone, Raman is angry. Ishita asks her not to worry. Aaliya asks her how to calm down Raman. Ishita asks her to take icecream for Raman, talk and sort
it out. Aaliya goes to Raman. Ishita sends Roshni to give chocolate sauce to Raman. Raman says I don’t want this. Aaliya says forgive me, I realized my mistake. Roshni looks on. Raman says stop it, grow up, you have to manage bahu duties, please leave, I have much work. Aaliya gets sad. Roshni asks Aaliya not to worry, Raman will forget it. Ishita asks Raman to end this matter now. Aaliya says I think I should talk to Adi. Roshni says why to disturb him, he went for office work. Aaliya agrees. She asks what shall I do, I have to calm Raman’s anger. Ishita says Mrs. Bhalla has forgiven her, why are you doing this. Raman says you have seen mummy, if anything happens to my mum and dad, I can’t live. She says they will always be with us to guide us, don’t think wrong.

Aaliya talks to Mani and says yes, everything is fine here, Dadi is unwell, I m very happy here, I m missing you a lot, its late, sleep now. Ishita hears her. She holds Aaliya and says I m so proud of you to keep the matter at home, thanks, shall I get food for you. Aaliya says no, Raman is still annoyed. Ishita says there can be one way. She takes Raman’s laptop and papers, seeing him sleeping. Aaliya asks does he know I have this laptop. Ishita says no, he was tired and sleeping, its imp presentation, if you make this, he will be glad. Aaliya says I know this, I will make it soon, thanks.

Ishita says Raman loves mummy ji a lot, if anything happens to her, he can’t bear it, but he will be okay, will you have coffee. Aaliya says yes, I have to be awake all night. Ishita gets charger. Adi calls Aaliya. Aaliya says I m busy in some work. She asks Adi to sleep and call tomorrow. Amma gets drumsticks and says you eat oily food, you fall ill. Mrs. Bhalla says I m fine. Amma cries and says I can’t lose my best friend. Mrs. Bhalla says stop it, will you make me cry. Amma says I will cook this drumstick. She goes and comes. Mrs. Bhalla eats drumsticks raw. Amma sees her and stops her. She laughs. She says I will make its soup and come. Mrs. Bhalla jokes and they laugh.

Raman asks Neelu for his laptop. Aaliya gives the laptop. Raman says Ishita you completed my project. He sees Aaliya. She asks him to check once, forgive me. Raman says I m getting late for office. Ishita says enough Raman, how can you believe such, she was been awake all night to make presentation, she got up early to make your fav parathas, just her phone was not charged, this can happen with anyone. Raman says its not a small thing, why are you taking Aaliya’s side. Ishita and Raman argue. He asks Neela for car keys. Neelu says driver took the keys. He says tell Papa I m taking his car.

Mr. Bhalla assures the man about the contract. The man says there are two good tenders. Mr. Bhalla suggests to give contract to Sukhdev. Appa says no, show me Shekhrand’s file, his tender quotation is less, why Sukhdev. The man asks them to decide and tell tomorrow. Mr. Bhalla and Appa think what happened to them. Raman stops car at the checkpost. Constable says open the dicky for cheating. Raman asks him to hurry up. Constable shows the drugs packet. Inspector asks Raman to come out, do you know what’s this, you have illegal drugs, you are under arrest. Raman gets shocked.

Ishita comes to Mrs. Bhalla and asks why are you not resting, have medicines. She feeds medicines. Mrs. Bhalla says I will not eat daal khichdi today. Ishita asks her to have soup first, then I will make anything you say. Mrs. Bhalla asks what’s the matter, you did not argue, did you fight with Raman. Aaliya comes. Mrs. Bhalla says I m your mum, tell me, you had fight with Raman. Ishita nods. Mrs. Bhalla say you know his anger, he will come and convince you, where is he. Inspector scolds Raman. Raman says trust me, I don’t know about drugs, take my blood test, I don’t take drugs. Inspector says you know drugs business has much money. Raman says I don’t do all this, its not my car, my car went to garage, so I got this car. Inspector asks who else uses this car. Raman thinks how to tell its my dad’s car, and yesterday…..

Raman defending himself. He says its a spare car, we just use it for emergencies, atleast let me make a call home. Inspector agrees. Ishita calls office and asks for Raman, did he not come office. Mrs. Bhalla asks Aaliya to take her out. Ishita thinks how did Raman not reach office till now. Raman thinks Ishita’s phone is busy, I can’t tell this to anyone at home. Mrs. Bhalla asks Amma about Roshni. Amma says Roshni went for her entrance exam, she worked a lot, she will come first. Appa comes and asks Mrs. Bhalla how is she now. Mrs. Bhalla says I m better, where is Mr. Bhalla.

Neelu says Mr. Bhalla went to building secretary’s house to talk about contract. Appa thinks did he go there to tell Sukhdev should get contract. Mr. Bhalla comes and greets Amma. He asks Mrs. Bhalla to rest, health gets fine by positive environment. Appa and Mr. Bhalla taunt each other. Appa goes. Amma asks were they fighting. Mrs. Bhalla says it looked so, but why are they fighting, don’t worry, they will be fine, get something spicy for me, Ishita will just get soup. Amma says you are so sick and wants medicines. She goes to cook food.

Ishita says call me when you know anything. She says why is Raman’s phone unreachable. Raman calls on landline. Mihika answers. Raman asks her to go aside and talk, where are mummy and Ishita. She says Ishita is in room, tell me. He says I m stuck in a problem, the car I took today had drugs. She asks what. He says find out who took the car yesterday, inform Romi and ask him to arrange my bail, I m in police custody, I can’t call again. She says fine, I will do everything. Mrs. Bhalla asks whose call is it. Mihika says its Aaliya’s call.

Ashok gets a call and says what, Raman is in jail, its good news. He says I will not miss this chance. He calls Taneja and says I heard you are doing a project with Raman’s company. Taneja praises Adi’s ideas. Ashok says its good Raman is not heading this project, he is in jail, drugs are found in his car, my staff member went to police station for legal work and saw Raman, if you are working with such people, then God bless you. He smiles.

Aaliya asks what, drugs in the car, this can’t happen. Mihika asks her about her friends. Aaliya says they are my childhood friends, I know them well. Mihika asks her to think, if anyone kept drugs in the car. Aaliya says no, there was no one. Mihika says I will call Romi, we have to get Raman’s bail. They see Mrs. Bhalla. Mrs. Bhalla cries and says Raman is in jail. She runs to tell Ishita. She says Raman is in jail, save him. Ishita gets shocked.

Mihika says I was going to tell you, Raman was trying to call you, he called on landline, I was telling Aaliya and Mrs. Bhalla heard this. Ishita says nothing will happen to Raman, calm down. Mrs. Bhalla says I need my son, save him. Ishita asks Aaliya what happened, its big thing, call your friends and ask them did they leave anything, they should not doubt. Aaliya calls her friends. Mihika informs Romi. She asks him not to tell Ruhi or Adi, talk to lawyer.

Bala says don’t worry, I will reach on time. Shrishti comes home to pick her bag. Ishita says you are Shrishti right, Aaliya went out, she told me about your bag, I will get it, come. She gives the bag. Shrishti says this is not my bag, its smaller. Mihika gets another one. Ishita says Mihika is Aaliya’s aunt. Shrishti says even this is not mine, I m leaving, maybe you can’t find it. Ishita asks her to explain how was the bag. Shrishti says its pink paper bag, smaller than this, you are not understanding, I don’t know why. Mihika says sorry, there are many packets. Ishita gets her bag and asks is this the one. Shrishti says yes. Ishita drops it. Shrishti asks what did you do. Ishita says its okay, its cheap talcum powder, we will clean it. Shrishti asks what, you know the cost of these drugs. Ishita signs Mihika. They record everything. Police comes from upstairs. Bala and Aaliya come there. Inspector says you have accepted its drugs, its illegal thing. He arrests Shrishti. She gets angry on Aaliya. Ishita scolds Shrishti and says Raman got arrested because of you. Ishita thanks Bala.

Bala and Ishita get Raman home. Mrs. Bhalla hugs him. She says I was so worried, I knew Ishita will get you. Raman says I told Mihika not to tell anyone. Aaliya says Dadi heard me and Mihika. Ishita asks Raman to make Mrs. Bhalla have food and rest. She sees Aaliya. Ishita talks to Raman. She says I m happy you are safe. He thanks her. She says Aaliya helped me, then I could get Shrishti caught, Aaliya did not know her friend is such, forgive her. He says its not a small mistake, Aaliya’s friends are such bad, drug peddling is a big crime, I would have fell in big problem, think of our business and family, Aaliya should know people, its high time, I know she is caring and good, but she is immature, she has some responsibilities. She says she is trying. He says trying is not enough, its better if she learns from her mistakes, I don’t have time for this, I need to go office. He goes. She says he does not listen anything.