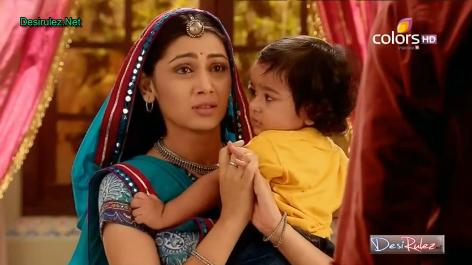 Location: Udaipur Haveli
All are shocked beyond belief, seeing sanchi’s condition. They run upto her, while she hugs choti maa tightly. Jagiya sensitively tells them, everything narrating what happened. all are shocked, while mahi and shiv are very angry. Sanchi relentlessly keeps crying. Shiv asks her not to cry, as he would teach those boys a lesson for life. Mahi is boiling with anger, and asks to be let loose on those boys. Sanchi’s family is distraught and extremely upset at sanchi’s condition. Mahi and Shiv are downright angry, and they decide to beat those boys to pulp and give them the rightful punishment that they deserve while Alok reprimands sanchi for wearing such a dress, as it definitely didnt help her cause. Jagdish comes to sanchi’s help, saying that its those boys and their mentality’s fault, who objectify women and cant respect them, and hnece dress doesnt matter at all. Shiv too agrees, saying that its the boys’ mentality. Jagdish says that sanchi would like to keep herself updated with the changing world, and its her right, but soem antisocial elemenst understand that if a girl wants to live life like she wants, then she is to be doused. Jagdish says that they need to understand that more than the length of the dress is not of much consequence, what matters is the depth of the mentality.

Jagdish requests alok not to be angry at sanchi, as she’s been through a trauma that they cant even imagine, and that she need their support now. alok cuddles sanchi and hugs her tight, while she apologizes profusely. Ananadi, looks at jagiya with gratitude. She and shiv come to him to thank him for protecting sanchi. Jagdish asks them not to mind, as anyone would have done the same. He excuses himself to leave early for jaitsar. He asks sanchi to take care of herself. shiv asks him to wait and take the things that they had got for his family, from kashmir.

Sanchi is in trauma, reliving her condition, and anandi’s doubts about the dress. Ananadi comes to her room, with a glass of milk. She sits beside sanchi, who says that she must have told everyone that she had lied to her, and that whatever happened to her was her fault, and she must be happy at that. anandi says that she didnt say anything. Sanchi says that she’s thinking of talking to her mother, by which she would salvage herself and her fault, because of which she was angry. anandi asks why would she do it, and she can understand what her pain is right now. She says that she just came to look out for her, and see if she can help. Sanchi asks her to leave her alone as she wants to rest. As anandi begins to take that dress, sanchi takes it and tells her that this is her fault, and that she shouldnt meddle in her affairs. anandi is shocked seeing such rudeness.

Location: Jagdish’s hotel in udaipur.
As jagdish comes to his room, he gets sanchi’s call asking if he’s reached. when he says he has, she thanks him again, when jagdish assk her not to, as anyone who was in distress, would have demanded this thing, and he would have helped. Sanchi says that for her, its a big thing, as he saved her future, her self respect and her dignity from being spoiled. She says that she’s feeling better talking to him, when jagdish says that he can talk to her whenever she wants. He says that he would be leaving tomorrow, and that she should rest too. She asks him to call as soon as he reaches jaitsar, as she wants to wake up hearing his voice. He agrees and bids her goodnight, and cancels the call. Sanchi remembers jagdish’s support in her trauma, and says that he is awesome and very good.

Location: Jaitsar haveli and Udaipur haveli
Dadisa and the ladies are very confused as to what can be done when the person refuses to express himself. Seeing jagiya back, they ask how was his trip. He gives them the gifts that shiv and anandi got for them. They are happy at shiv and anandi’s sensitivity. Dadisa and sumitra ask jagiya to take care of ganga. When he asks what happened, they tell that ganga has been crying incoherently in her room for the past hour, and isnt telling anyone what happened. They ask him to talk to her. He stealthily opens her door, and finds her crying. jagis ask what happened, and why is he crying and if ratan or his family threatened her. when she says no, jagdish tries to coax her into talking and telling whats wrong, as all are worried fopr her, and will be able to solve her problem only if they know what is it. she says that it was her last examination. When he assk what happened, she says that one question, she forgot to write and lost out on two marks. He is very amused to see that she’s beating herself so much, for something so trivial. He says that she caused them to worry for no reason.

Sanchi, coming out of the bathroom, finds that jagiya hasnt called yet. she decides to call herself. As jagiya gets sanchi’s call, he ignores it, as he’s talking to ganga and the phone goes unattended. Sanchi is very tensed as to why isnt he picking her phone, and hopes that he call her soon. she thinks that he had promised that he would call when he reaches, so its possible that he left late and hasnt reached yet. Sanchi gets a call and thinking that its jagdish, says that she’s very happt that he called. But it turns out to be payal, her friend, who called to check on her. She thanks payal for her concern and cancels the phone. She hopes that he call her soon.

Location: Udaipur Haveli and jaitsar haveli
Sanchi is very tensed, wondering why hasnt jagdish called up yet, and is cancelling her calls too. Jagdish tells ganga that every mark is important, but not that its a matter of life and death. He talks to mannu, while trying to tease ganga and get her to laugh. He asks for an idea from mannu, and says that they should go to the temple, and she would feel good too about this and also pray to the lord for her results. ganga gets excited and goes to make the necessary arrangements.

When sumitra calls anandi, Anandi asks sumitra how did they like the gifts, she says that everyone loved them. She also tells anandi that she shouldnt have bothered to spend so much, while anandi says that they wanted to make everyone happy, and that cant be tagged with a price tag. Sanchi overhears her talking on the phone. after she cancels the call, when anandi calls sanchi, and asks her to sit beside her, sanchi asks anandi who was she talking to. When anandi says that she was talking to sumitra, who told how much her gifts were liked, sanchi thinks that jagiya has reached and yet didnt call. While anandi is surprised to see her upset and asks what happened, sanchi runs away from there, without giving any answer. She rushes to her room, and is angry at jagdish saying that he broke her promise, and had the time to give gifts to his family, but no time to talk to her. Sanchi thinks that she’s been waiting like an idiot for his call, and decides that she wouldnt call him either. Sanchi gets a call, from some lottery agent saying tahts eh has won, two tickest to singapore, but before he can complete, she canbcels the phone asking him to shut up, and throws the phone away in anger.

Location: at the temple
Ganga and jagdish are praying in the temple. after the priest gives them prashad, jagdish asks ganga if she’s feeling better. she says that she is indeed happy now. As they walk out, ganga commenst that this is an isolated place, and not much crowd around. Jagdish too agrees and says that this gets crowded around the navratras.

As a kulfi wala comes, jagdish coaxes her into eating kulfi, while she’s cautious about falling sick. They enjoy the kulfi together. jagdish asks what did she pray for. Ganga says that she wanted peace and happiness for everyone in the family. When she asks jagdish, he asks her to guess, but she says that she cant know whats in his heart. He says that he asked for her good marks in the examination. ganga is pleasantly surprised. Some goons come in a van, and find jagiya chatting away with ganga. Ganga expresses her concern over her last paper not going well. jagdish comforst her that he knows everything, and she made the ffort, and she would be rewarded for her hadrwork, and dedication. He asks her to continue working, and the results shall follow. the goons eye him and begin to progress. They loot a vendor’s shop, selling puja items. Jagdish sees this and is very angry. as he comes to defend the vendor, they start hitting jagdish, with the rods. He gets into a scuffle with them, giving some of them a taste of their own medicine, but later they outnumber him, and they catch hold of him.

As ganga comes to him, to attend to him, he pushes her and asks her to go back inside the temple. the goons too jerk her away, and hit jagiya with a fatal blow, of the iron rod, on the head, and he falls to the ground. ganga is shocked to silence. She screams out for jagiya, while they keep pelting him with one blow after the other. jagiya is unable to put any defence. the goons leave in their jeep, while ganga keeps screaming out for help, and asking jagiya to remain awake, while he drifts into unconsciousness. She screams out for help. She picks up some ice from the vendor’s shop, and puts it on his head, and then tearing her dupatta, she pads his head, for relief. she continually tries to wake him up. She tries to stop the vehicle on the main road, amidst huge traffic.

As ganga stops some cars, and tells them the jagiya is bleeding very much, the owners are either more concerned about getting late for a marriage, or their new car seats, rather than helping jagiya and ganga. Ganga screams out, saying that noone is anymore humane and doesnt have an ounce of humanity in their hearts. She ironically points out that a doctor who saves lives today, is in need of someone to help him, and isnt getting anyone. she runs back to jagdish and asks him to wake up, assuring that she wont let anything happen to him.