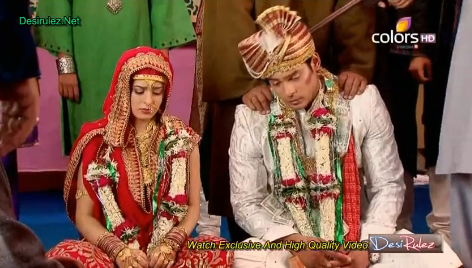 Anandi and Shiv are sitting in the snow. Anandi asks Shiv why did you bother me so much before coming here.. but now I found out that you can act too. Shiv says, all that I learned for you too.. because “kisi tarah aapko patana jo tha”. Anandi gets surprised knowing he knows such language too. Anandi thanks him for helping her in moving on in her life. she says no husband can understand his wife as much as you do. Shiv says, you’re the reason for that.. you’re very honest girl. Whatever is in your mind shows up on your face.. that’s why it didn’t take time to me to understand you. I knew you would fulfill your promise and your marriage with full loyalty. Anandi says, I can’t even think of living without you now. Shiv tells her, there is no need for that because I will be with you all time. Anandi is having pain in her leg.. Shiv says he will go and get pain killer.

Jagya comes to Ganga’s room. Ganga is playing with Manu. As soon as Jagya comes, Manu starts clapping. Jagya give gifts to Manu. He then gives a teddy bear.. Ganga asks why so many gifts? Jagya says this is from Sanchi. He remembers Sanchi buying that teddy bear with “With Love” written on it, and when Jagya asks her for whom that gift is for.. Sanchi replies .. you.. and then says kidding.. its for Manu. Ganga tells Jagya that no one gifted her anything and she is happy seeing Manu getting gifts. She thanks him in english and Jagya is impressed. He then checks her hands and goes to get bandaids.

Anandi is getting worried as Shiv still has not returned. Abdul tells her to stay there and he will go and search him. He comes back and says, he is not here either.. but he should be here only.. where he can go. They go and ask everyone, but no luck. Anandi then starts searching for him. She screams Shiv.. Shiv. Anandi and Abdul search everywhere, but can’t find him. Abdul says they will have to inform police straight away because once it gets dark, it will be very hard to find him. Anandi thinks about calling Udhaipur, but then decides against it as everyone would get worried and come here.

Anandi and Abdul are in police station now. Anandi tells police inspector that they searched everywhere and couldnt find. Abdul says, he is collector of Udhaipur. Inspector says, it doesn’t matter whether collector or a normal person.. it’s our duty to make sure all tourists are safe. He says if we cant find him till morning, then we will have to give his news in national media. Anandi hopes they find him soon otherwise families will find out. Jagya’s family decides to call Anandi. Anandi doesn’t pick up afraiding that they might find out truth from her voice.

Anandi goes with inspector to search shiv. Dadisa is now worried for Anandi as she didn’t call them or pick up their call. Basant says, they might be busy in visiting places.. they will call when they get time. Dadisa says, you go out in day time.. but now its evening. Dadisa asks Bhairo to call at Shiv’s house.. Bhairo also says they will be busy.. but Dadisa says I won’t be relaxed until I get her news.

Anandi is recalling Shiv’s words which he said when they were praying before leaving.. that he will run away that far that Anandi won’t be able to find him. Anandi says, I never imagined in dream that you will really go far away. Was it God’s sign? Why I didn’t stop. Anandi prays and says, if I made a mistake, then punish me.. don’t punish Shiv. Please bring him back to me.

It’s morning now and Anandi is still sitting beside Krishna’s idol. She dials Shiv’s number, but phone is switched off. She then calls police inspector and asks him if any news. Inspector says, still no news. She asks him to inform her right away if they find any news. Anandi cannot wait any longer and decides to go and search on her own. She says, there is no point of Anandi living if Shiv is not there. She goes out and finds Abdul there. She asks him, you were here whole night? Didn’t go back home? Abdul says, Abdul will go home only after we find sirji. They start searching Shiv. They are in car and Anandi recalling her and Shiv’s kashmir happy moments so far with Noor-e-khuda song in the background. She gets off the car and asks everyone if they saw Shiv. No one is recognizing. She sits down in a disappointment.. looks at Shiv’s photo and asks, where are you Shiv? A lady comes and asks her what happened.

She shows photo and asks if she saw him. Lady says yes.. I saw him here.. some goons kidnapped him and took him with them. Anandi follows that path and sees a lady. She now asks her. Lady says, this ‘shitan’? No I didn’t see him. Anandi asks, then why did you call him evil? Lady says, I didn’t see him, but I know him. This evil Vikram has destroyed so many girls’ lives. Anandi says, he is not Vikram. he is Shiv. We came from Udhaipur. Lady says, you’re his wife that is why lying with so ease. Anandi asks her to tell her where she saw him. Lady refuses.. but when Anandi says, i am like your daughter.. please tell me. Lady stops and says, if you are not lying, then the wrong thing is going to happen with him there. The lady is taking Anandi there, but says, you can’t come like this (referring to her dress).

Sanchi is looking at Jagya’s photos in her mobile. She says, today this will be my wallpaper. She says, don’t worry.. I will keep this close to my heart. Daddu comes and asks her for some number. She gives a wrong number.. so Daddu decides to look at the number himself. He takes the phone and notes down the number, but doesn’t see the wallpaper. Sanchi is relived, but says it was fun.. right Doctor Jagdish?

Shiv is almost unconscious and some goons are making him marry a girl forcefully, keeping gun on his head. Anandi comes and screams Shiv. Shiv looks at her, but can’t say anything as he is almost unconscious. She runs to him, but they block her. One guy says, this is the same girl with whom Vikram came here. Anandi says, he is shiv.. my husband. Girl’s father says, he is Vikram.. I have proof. He shows his photo with that girl. Shiv is in moustache n looks very different in this picture.

The father says, he destroyed my daughter’s life. He acted as if he loves her and after he had enough of her, he ran away. We were searching for him and finally found him 2 days ago and started keeping an eye on him. Anandi tries to explain them that he is her husband. As she argues loudly, some people run in with guns. Girl’s father asks them to put the guns down.

Anandi calms herself down says, fine.. I agree what you’re saying that he is Vikram.. an evil who has destroyed so many girls’ lives. But this girl.. is your daughter, right? Who became half mad because of him.. and today you’re making her marrying with the same guy? To make her completely mad? You’re making mistake.. you’re destroying your daughter’s life like this. The father says, I have no other option.. my daughter is pregnant and Vikram is father of that child. If I don’t make my daughter maarry him, then who will she marry to? I won’t spare this guy. Anandi says, you think he will be a good husband after marriage? No. You’re destroying your daughter’s life.. and with her.. her child’s too. If he is really Vikram, then I still think that this is not the solution.