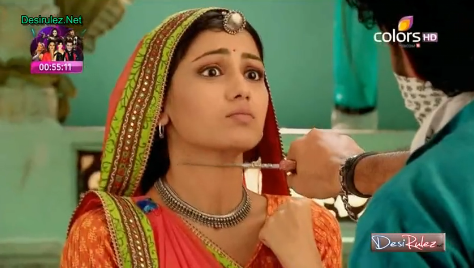 Jagya gives statue of Krishna to Shiv’s family saying she loves that statue, but Dadisa forgot to give. He asks them to give to Anandi when she returns. Jagya now has to leave for a lecture. Sanchi wonders if he is leaving all of a sudden as Anandi is not there. She tells her family to let him go and work today.. but tomorrow she will take him out to show Udhaipur. Jagya says he has exhibition. shiv’s father says.. if you don’t listen to her straight way, then she will scream and forcefully make you agree. Sanchi says, that’s right.. so it’s upto you whether you agree straight way or forcefully. Jagya says… fine. Sanchi tells him tht she will let him know exact time. Jagya leaves.

Jagya is in car and remembering Daddu’s words of Shiv and Anandi going to Kashmir for honeymoon. He says why it should bother you.. they are husband and wife so it’s common. He gets call from Dadisa. Jagya tells her about Anandi’s Kashmir trip. Dadisa says all of a sudden? Jagya says shiv had some work in Delhi and then they will go to Kashmir. He gave surprise. Dadisa says she could have at least called us.. she heard about Kashmir and forgot us? She smiles and says will call her. Dadisa then tells Jagya that Ganga’s saas-sasur came and tried to threaten Ganga. She says I was surprised to see Ganga’s guts. Once she decides something.. no one can change her decision. Neither with love or by force. Jagya says I agree with that too.. They say Ganga should not forget her sasural after how they treated her. They say she will win and they all are with her.

Sanchi is making list where to take Jagya. She decides to go to some lake, museum and for that they will have to leave early. She sends him sms saying we are leaving at 9 sharp in morning.. be ready. She talks with herself, it’s so strange.. when he shouted at her after accident.. she got so angry at him… and today she has became host and planning to take him out and show Udhaipur. She says.. How would I know he will come out to be this interesting person. She remembers their flashbacks and smiles. She gets reply from Jagya who says will be ready. Sanchi says, whenever I met him.. he always gave surprise. Let’s see what happens tomorrow.

Dadisa tells everyone in her house about Anandi’s trip. She says Shiv keeps her so happy. She’s very happy because of this and news that Gehna gave. She says they have to start planning from now.. they have to go buy new clothes for the baby and there will be party. Ganga says, but you said we are not supposed to tell anyone until 4 months and reminds her of some tradition and rituals. Dadisa says Basant and Gehna showed us miracle and I forgot about all tradition and rituals. She tells her family members and you all didn’t remind me either. She tells Ganga “Thank You”. Ganga replies, “Mention not”. Everyone smiles.

Ratan Singh’s parents visit him in jail and tell him that ganga refused to listen to them. Ratan says, it’s not her fault.. she is able to do all this because that doctor sahab is with her. Parents ask him now what they will do next? She won’t give Mannu .. how their family’s hierarchy will go ahead? Ratan’s father tells him that they should have killed her when they had got opportunity. And also tells him that he should have shot Anandi that day. Ratan says, have you gone crazy? If I had done that, then I would have got death punishment.. she saved my life other day.. so I had no other option but to show her that i am feeling guilty. Group of ladies was there.. so i thought it’s best to accept my mistake.

Parents ask so what’s plan now? Stay in jail entire life? How we will run our house? Ratan says them, don’t worry.. I am coming out of jail very soon. They ask, then why did you send us to Ganga? Ratan says, I wanted to give her one chance.. but she didn’t listen.. so now watch.. how I take my revenge after coming out of jail. Revenge from Ganga.. that doctor.. whole family and I will destroy that “jagatmata Anandi”. I couldn’t do anything last time.. but this time I am well prepared.

Shiv’s mother is on the phone with Shiv. She asks them to enjoy. After the call, she tells everyone that Anandi is loving Delhi’s food and he has never seen her eating like that. Daddu asks, but did they leave for Kashmir or no? She says, they are on the airport. Everyone is happy.

Gehna finishes talking with someone on her cell. Ganga comes and looks at the phone. Gehna asks her if she wants to call someone. Ganga says so.. I was just looking it. She tells her how she gets scared using cell phone. Gehna tells her you’re just like me.. I used to scare too but then Jagya showed me an easy way. How you can store number of people whom you call too often and then you can just call by pressing 1 button. She shows to Ganga. Ganga says he didn’t become doctor just like that and says he’s an all rounder, not just a good doctor. Gehna has to wash some clothes. Ganga tells her she will do, but Gehna says no.. I will do it. Gehna leaves.

Some goons enter with a knife and ask Ganga not to scream. They ask her where Basant keeps files. Ganga asks, files? Ganga’s hand get cut. They say we will fine file by ourselves and threaten her to kill her after finding the file. One of the goons starts searching the files. They hear some noise from the bathroom. Ganga stops them from entering saying it’s their servant washing clothes. Ganga remembers what Gehna just told her that if you press 2 on cell phone then it will call Basant. Ganga pretends like she is not feeling well and sits down near phone and presses 2. She asks them but what did my husband do that you came here? Gehna is getting worried inside the bathroom. Basant picks up the call and hears goons voice. One of the goons tells her, what do you think that he will take away my land property like that? I got that property in viraasat from my father.. once I find that file and burn it.. then I will see what he does. He takes some name and Basant rushes to home with his workers.

Goons can’t find the right file. They ask Ganga. Ganga says I can’t even read.. how would I know which file it is? She asks them to check another cupboard.

Basant comes to the house.. Dadisa and other family members get worried seeing him rushing in like that. He tells them that robbers are his room and he goes to his room with workers.

Goons are asking Ganga where is the file. Ganga says, I don’t know anything.. They say, fine.. then tell us in your next life. They are about to stab her with the knife, but Basant comes in and saves Ganga on the last moment. Basant tells his workers to take those goons to police and he will be there.

Family comes in. Basant asks where is Gehna. Ganga says she is fine and opens the bathroom door. Gehna comes out and says she is fine because of Ganga only. She says, I heard them asking for some file and talking about land. Basant asks Ganga, so you called me? Ganga says, Gehna taught her how to call and she just did that. Gehna asks her if she didn’t scare and why she didn’t say that she is in the bathroom. Ganga says, I was scared but how could I take your name. Everyone is very thankful to Ganga. Ganga says, I just did everything in scare. They tell her they owe her big time.

Jagya and Sanchi are in a car. They are talking with each other. Sanchi says in her mind, today is one of the best days for me. Jagya in his mind says, Anandi must have reached Kashmir by now. Sanchi asks him what kind of food he likes. Jagya says some dish by Anandi.. and then he says, I mean everyone likes that dish at my home. Sanchi says, I understood you like food made by Anandi. She then asks him if she can ask him a personal question. Jagya says, there is nothing that you can’t ask me. Sanchi says, I heard you’re thinking to remarry. Jagya says, yes.. thanks to Anandi. I didn’t want to remarry, but then Anandi explained to me and I realized that I was wrong. Sanchi says, it’s good.. she moved on in her life.. now it’s your turn.

Jagya is lost in some thoughts. Sanchi asks him what are you thinking? Jagya says, I was thinking about some laboratory experiment. Sanchi gets a call from her mother. She asks her if Jagya is with him. Sanchi says yes. She tells her to tell him that he will take lunch with them in their house. She also asks her to ask Jagya what he likes. Sanchi says, I know about his likings.. he likes food made in house. Jagya tells Sanchi that he is very busy so won’t be able to come. Sanchi’s mother then talks with Jagya and says, I know you’re busy but you would take lunch at exhibition too, right? And you left yesterday without eating anything.. so today you’re coming here for the lunch. Jagya agrees.

Sanchi’s mother then tells her about shiv’s call. Sanchi says, wow finally they are going for the honeymoon. Jagya has a nervous face