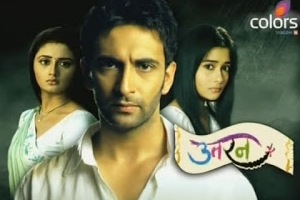 Taps goes to visit Rathod, to convince him to get Veer out of jail. He says that he will get Veer out of jail if she marries him first. He reminds her that she has no future as her husband and family no longer want her. Unable to convince him otherwise, Taps returns home, still confused. Ichcha also reaches back home w/ Umed, bringing the news that it is impossible to get Veer’s blood tests done now since its been past 12 hours, the longest a trace of the drug will remain in his bloodstream. At Rathod’s place, he goes to see his Daijaan and tells her of the marriage tomorrow. She is excited and runs off to make arrangements. Later, Dadaji calls for his bahu, and both Ichcha and Taps come there. Dadaji hands papers to Ichcha and tells her to make sure they get to the lawyer. Taps is left wondering if Rathod was right and she doesn’t belong here.

Ichha crying and remembering Veer when Umed comes and tells her to control her emotions since she will hv to b strong as a wife and support her husband in these testing times because this is the time when a husband and wife needs to stand for each other Mr.Rathod is shown busy in his shaadi-sangeet preparations while his Daijaa is very happy about all this and wants to make sure that the sangeet is very grand At Bundela house ,In the drawing hall ,Daddaji and Umed r shown talking to the lawyers about the case ;Lawyer says that Veer is trapped in such manner that all medical reports and proofs r going against him and so the case is very tricky one unless they try to get some fake evidence and remove Veer out of this mess ;Hearing all this Gunwanti-Ichha and all others r worried and clueless …

Just then a saree parcel comes in the house for Tapasya ;Its sent as shagun by Mr.Rathod but Tappu lies to all that she had ordered this saree for the coming God-bharai(baby shower) ;Gunwanti is not too happy since the situation that moment was all tensed with everyone talking to the lawyer when this parcel comes and so Tappu apologises to Gunwanti by telling her that she had ordered this saree earlier only and she was aware that this parcel will come now at this moment .. Just then Mr.Rathod calls up Tappu in her mobile and so Tappu goes inside to talk to Mr.Rathod when he asks her whether she got the parcel ;Mr.Rathod keeps irritating Tappu with his marriage ka celebration talks and Tappu keeps getting irritated with all but keeps listening silently to his blabberings about their sangeet and marriage ;Mr.Rathod asks Tappu to come in the sangeet on time without fail..

At Jogi’s house,Divya is worried about Veer’s bail ;Divya is waiting for Jogi to come home as he has gone to try out for Veer’s bail only when Pushkar starts his brainwashing act by telling Divya that even Damini has gone with Jogi ;Just then both Jogi and Damini arrives when Divya asks Jogi about Veer’s bail on which Jogi tells Divya that he tried a lot but the case has become so tricky that he could not get the bail for Veer ;After Jogi leaves ,Pushkar further brainwashes Divya by telling her about how Damini these days spends her whole day with Jogi only …;Divya looks very angry and insecure now ..

Veer in jail in remembering Ichha while Ichha is remembering Veer and a sad song is going in the background.