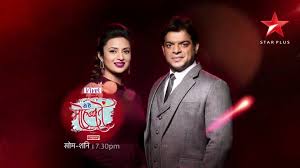 14th Monday January Update On This Is Love

Adi coming to room. He sees Aaliya. Inna sona kyu….plays…. They smile. He holds her to kiss. She gets back and says sorry, I m not able to forget everything, I think we should take some time, I don’t want to start relation in such a way, I hope you understand. He says its okay, I will never force you, I lost your trust once, I will do anything to win your trust, when you complete trust me, we will take our relation ahead, you would be tired, take rest. He smiles and goes.

Adi comes back and sees her sleeping. He says I know I have given you much sorrow, I promise I will make everything fine, once I get the annulment papers in hand. He sleeps on the cough. Its morning, Ishita sees Raman sleeping. She thinks to talk to him and goes to get coffee for him.
She gets coffee. She looks for him. She says he did not had to talk to me, so he went, I will find out Adi’s annulment papers.

Baweja says great, Adi and Aaliya got married, we should celebrate. Ashok says yes, we will celebrate after tackling Bhallas. Baweja says wait, I m getting Ishita’s call. He adds Ishita’s call on conference. Ishita asks for Adi and Roshni’s annulment papers. Baweja asks her to come and collect. Ashok says well done. Ashok says I will ruin Raman’s respect now. Roshni says I did mistake in sending IAS form, what shall I do now, its last day. Ishita says its not a problem, we will fill it online, I mean we will go to Amma’s house and send form by internet, come.

Gagan asks why, you said you will get Adi’s truth out, what happened. Ashok says Roshni created hurdle. Gagan says I will not leave Adi, will he enjoy with his new wife by leaving Roshni, no way. Ashok asks him to do what he says. He tells his plan. Gagan says I understood, it will happen what you say. Raman calls Baweja and apologizes to him. He says it was shocking for me. Baweja says I understand. Raman says I had to collect annulment papers, everything would get easy. Baweja says of course, I m busy in meeting, I will send papers, even your wife was asking for papers, don’t worry, you will get it. Raman says Ishita will get peace once annulment papers come.

Ishita fills Roshni’s form. She gets Baweja’s message and says judge messaged that he will send papers home, nice. Roshni says I heard IAS exam is tough. Ishita says its difficult, I think you should send forms for more entrance exams, why to waste a year, I will tell you about courses. Roshni thanks her. Ishita says I m thinking for you as I think for Ruhi and Adi, I m getting peace to help you.

Shagun makes gifts ready and tells Dadi that its pagphere rasam, so she got the gifts. Dadi says Ishita does not believe in all this, do this if you like, I finished all cooking, I prepared Aaliya’s fav dishes, where is Mani, did he reach there in excitement. Mani gets sweets and gifts. Shagun says I also got gifts. Mani says I went to have sweets and got gifts too. Dadi says you both spend a lot. Mani says we are getting late, we will go. Shagun says Aaliya would be sleeping. Dadi says no, Aaliya would have made something special, its her first cooking rasam.

Aaliya wakes up by someone’s knock at the door. Adi wakes up and sees her. Ruhi calls them out. Aaliya asks Adi to wait and keep pillow back. Ruhi says don’t know why did they send me, wake up now, good morning love birds. Adi greets Aaliya as his wife. They smile.

Ruhi greets Aaliya as Bhabhi. She says I did not wish to disturb, Dadi has sent me for Aaliya’s first rasoi, they are waiting for Aaliya to make someone tasty. Adi says Aaliya will make something, everyone would have done breakfast. Ruhi says yes, but why are you scolding me, Aaliya showed her magic in one day. She goes. Adi shuts door. Aaliya asks don’t you have to get ready. He says yes there is just one bathroom, I will go to Ruhi’s bathroom, you get ready here. He takes his clothes and asks her to get ready fast, else Ruhi will come again.

Ishita thinks to tell Raman about annulment papers. She says I had to tell something. Raman asks is there anything left. She calls him rude. Ruhi comes and says Dadi is calling you, its Aaliya’s first rasoi. Raman asks Ruhi to show jewelry to Raman and ask his choice to gift Aaliya. Raman says I have better gift, Adi’s annulment papers, I spoke to Baweja. Ishita says I also spoke to Baweja. Ruhi asks why do you always fight, fine I won’t tell anything, I m going, come soon. She goes. Ishita says he is so rude and won’t talk, once I get annulment papers, I will explain I was not wrong.

Mrs. Bhalla makes Aaliya do rituals before first rasoi. She wishes Aaliya. Ruhi asks Aaliya what is she going to make. Mrs. Bhalla asks Aaliya to make sweets. Ruhi and Mihika ask her to make south indian. Romi asks how much south indian will you make her cook, make continental. Adi asks them to make Adi cook something easy. They all argue. Ishita smiles. Yeh hai mohabbatein….plays….. Ishita messages Aaliya. Aaliya smiles. She says wait, I m cooking so I will decide, you all wait. They smile.

Shagun and Mani coming. Ishita says so many gifts. Shagun says we are girl’s family, we came to take girl for Pagphere, so we had to get gifts. Aaliya and Adi come and greet. Ruhi says Aaliya just came and you are taking her. Ishita asks Adi to get Aaliya back soon. Aaliya goes to kitchen. Mani says I feel Aaliya has grown up. Mrs. Bhalla says its Aaliya’s first rasoi. Ruhi says she made us out of kitchen, don’t know what she is making. They all talk about Aaliya’s first rasoi dish. Ruhi and Mihika go to see. Ishita thinks why did annulment papers not come. She calls Baweja and asks for him. She says he is not there, fine, tell me I called. Everyone sit to dine. Aaliya makes halwa puri. Everyone like it. Aaliya says I was confused, Ishita asked me to make this.
Romi teases Adi. Adi says even halwa would be good. They all laugh.

Ruhi says Aaliya passed, Adi finds it yummy. Raman asks Adi to feed Aaliya. Adi feeds Aaliya. They all clap happily. Yeh hai mohabbatein…..plays….. Mrs. Bhalla gives shagun to Aaliya. She gives gift from Simmi’s side. She says Simmi could not come, but is missing all this. Ishita hugs Aaliya. Aaliya takes everyone’s blessings. Inspector asks who is Aditya Bhalla, we have an arrest warrant against him. They all get shocked. Raman asks why will you arrest him. Inspector says he remarried while having his first wife, its illegal. Raman says Adi has annulled his first marriage. Inspector asks do you have papers. Ishita says Baweja was going to send papers. Raman calls Baweja and says he is not answering. Inspector says we have to arrest him. Raman asks who has done this complaint. Gagan and Roshni’s mum walk in. Inspector says Roshni’s mum has done complaint. She asks inspector to arrest Adi. Raman says its legal marriage, Adi has annulled marriage with Roshni Gagan forced him to marry. Ishita says yes, Gagan has made Adi marry at gun point. Gagan denies everything.

Gagan says Roshni would have not known where she has signed, Adi is shameless, they all are shameless. Ishita asks him not to cross limits. Mani asks how dare you say nonsense. Gagan says your son is fraud, he wants to cheat your girl also, I will tell you all the truth, marriage happened by Adi and Roshni’s consent, I will not let Adi run. Roshni’s mum says Roshni is not here. Gagan says ask them where did they hide Roshni, they can do anything. Gagan scolds Adi. Ishita says we have made Roshni safe, I will get her, she will say what a cheap man this Gagan is. She goes to Iyer house and asks Roshni to come fast, Gagan has come with your mum, Gagan is blaming Adi, come and tell them your marriage is annulled, tell them Adi was forced to marry you, come. Raman tells inspector to wait, Baweja said send papers.

Baweja says Raman is calling. Ashok says answer call, Gagan and police would be there, put call on loudspeaker. Raman asks Baweja about annulment papers. Baweja asks what annulment papers. Raman says Adi and Roshni’s marriage annulment, you said you will be sending papers. Baweja says sorry, I don’t know what you are talking about, maybe you are mistaken or your son lied to you. They all get shocked. Baweja says I m in meeting and ends call. Raman tries to explain. Mani says such a big lie, judge said annulment did not happen. They all stop Mani. Ishita says why are you losing control, you know Adi loves Aaliya, he can’t cheat Aaliya. Ishita asks Raman what happened. Roshni’s mum meets her. Raman says no use of talking to him. Mrs. Bhalla asks Mani why did he send Adi to Khandpur, all this happened because Adi went there.

Inspector asks Roshni is it true what they are saying. Ishita asks Roshni to say about marriage annulment. Roshni says its not true, I m still Adi’s wife. They all get shocked. Adi asks her what is she saying, don’t be scared. Inspector asks him to stay away. Adi says she is lying. She says why would I lie, we are husband and wife, its true. Ishita looks at Roshni.

Ashok and Baweja have champagne. Ashok says police would have taken Adi, I m glad Bhallass got the slap. Aaliya slaps Roshni and scolds her for lying and troubling Bhallas. She says Adi said right, you do acting and showed your true colors finally, mom says right, we should not trust you, we did big mistake to trust you, look at yourself, you want to believe Adi’s wife, what’s her comparison with us, we belong to good family and are well educated, we know Khandpur people treat us like animals, you all stay as animals, we did big mistake to trust you. She says Roshni is lying, Adi is saying truth. Shagun says Roshni is lying, she wanted to stay in city. Gagan asks inspector to arrest Adi, Shagun came to Khandpur to buy Kalirey, she did not listen to me, ask her. Shagun says I went to Khandpur. Gagan says I m saying true. Mani says enough is enough, inspector do anything you want, Aaliya I need to talk to you. He takes Aaliya and goes. Shagun goes with them. Ishita stares at Roshni. Mani asks Aaliya to pack her bags and come, Adi lied to us. Shagun asks why will Adi lie, its some misunderstanding, you are overreacting. Mani packs Aaliya’s bag. Aaliya cries.