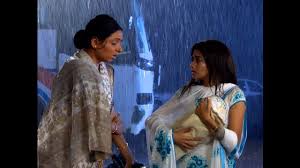 Nani tells the watchman that the child is her grandson and that she came to see the doctor. She gives him some money after taking it around the baby. The watchman blesses the child and let’s her go. Pushkar is amazed by nani and nani says ichchas son will never get the richness of the haveli and would be on streets and get no food. She asks him to dump him in a dustbin.

In the hospital Mai gets hysterical and veer is sad. Chanda controls Mai and daddaji consoles veer to support Ichcha who is still unconscious.

Tapu is trying hard to feed Rathod but he is upset. After a while she too breaks down and regrets leaving her girl in the storm. Then Rathod comes around and they do some romance and decide to go on a long drive. Must say their scenes suck and are totally out of taste and forced.

Divya jogi have decided to go to tapu when Jogi wants to visit Ichcha, she shows a fake smile at the news of ichchas delivery, she asks jogi to prefer tapu once for her sake and not stop by ichchas.

Damini is talking to God’s idol that everytime he does that with Ichcha – he first shows her a hint of happiness, and snatches away everything. But this time what he has done by taking away her child is very heartless. She starts crying inconsolably, and it seems God has heard Damini’s prayers in the sense that the child is a protected one. Pushkar tries to leave him inside the dustbin, when some people come his way and he is forced to pick up the child and hide.

Veer finds damini in the hospital, and they share an emotional moment when damini is worried that ichcha would not be treated well in his house, and that she did take good care of herself. she breaks down and so does veer and both wipe each other’s tears and hug.

Later pushkar tries to leave the child on the footpath when chanda and kasa kaka are walking in that area to throw away the sweets. meanwhile nani is worried if puchkar did the job properly or not. rohini comes all excited and nani drives her out.  Pushkar tries again, Third time daddaji stops him and gives him a chain he had made for the great grand child, daddaji also sees the child’s face.

Pushkar then thinks to quickly get rid of the child while he keeps the chain. (I have a suspicion that in the future Pushkar with use this chain on his own child and try to get Bundela wealth)

Precap shows Ichcha in a shattered state, crying in Veer’s arm for her baby. She is sitting on the floor besides the empty cradle, and veer as usual is expressionless.