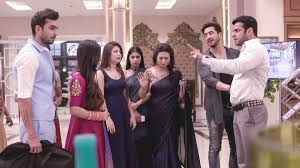 11th April Thursday Update on This is Love

Parmeet saying I have been after Pooja since morning, she is just going office, I can’t let Nikhil go, I can’t use Ruhi now, I will not leave Bhallas. He sees Shagun coming. He follows her. He sees Shagun talking to Pooja. He clicks their pic. He thinks now I understand why Pooja did that deal with Nikhil. Nikhil sees the video/pic and gets angry. Parmeet tells him how Pooja planned to send him. Nikhil recalls what all they did. Parmeet says I wish I could convince Raman. Nikhil says what if I lost my daughter, its enough, I will not sit quiet now. Parmeet fills his ears against Raman and Ishita.

Nikhil says they tried to make my daughter away from me, now I will make their daughter away. Parmeet says I also want this. Ruhi comes crying and shouts Nikhil.

She asks Parmeet did Nikhil leave, how can he go. He says relax, he is inside, having a bath. Nikhil comes. Ruhi hugs him and asks him not to go anywhere. She says I love you and hugs. He says I won’t go. Parmeet goes away and looks on. Nikhil says I changed mind because your great parents are trying to change my fate, they tried to use Riya. She says no. He shows her the video sent by Parmeet and says Shagun is blackmailing Pooja. Ruhi says I don’t believe this, what does Raman and Shagun want, shall I die. He says what will happen then, they will not let us live in peace, they thought they won, we moved back as we love them, we are adults and we will stay together now, tell me, will you live in with me. Parmeet looks on. She gets shocked.
She says no. He says what’s wrong in this, tell me. Parmeet says great, now Raman and Ishita will be shocked when Ruhi comes to stay with Nikhil. Ishita says maybe everyone will have breakfast late. Raman asks for Ruhi. She says she is sleeping. He says I just want to see her once. He goes to see Ruhi. Ruhi says no, just because I said you can stay with me at my house, it doesn’t mean we can stay together. Nikhil asks why, I m fed up of your Papa and Shagun’s doings, its time to show we will not get separated. She says we can marry and live together, what’s need of live in.

He says I love you, but I can’t marry, its too early, I got hurt in my marriage. She says I m ready to walk with you on every path, but… He says show me that you love me. She says I do love you, what about Riya. He says she will understand. She says its a big thing, I can’t decide this way, what will society think. He says your parents are also divorced, Ishimaa is your second mum, I want to be with you, you decide for both of us. She looks at him. She leaves.

Parmeet asks Nikhil what condition did he keep. Nikhil says Ruhi will come to me as she loves me, I will show Raman that I will win in the end. Parmeet asks will Ruhi come. Nikhil says yes and goes. Parmeet says this matter is becoming colorful. Raman says Ruhi is not in her room. Ishita asks did she go to Nikil. He says no. Mihika asks him to call Parmeet. Ishita says no, we will be blamed for doubting Parmeet, we shall wait.

Adi wakes up and sees Aaliya. He asks did you get ready so soon. She says yes, my friends want us to join them, we can travel, its matter of ten days. He asks what, I have much work. They argue. She gets angry. He goes to work. Raman says I will go to Parmeet’s house. Ishita stops him. Ruhi comes and says you will never change. Ishita asks where were you. Ruhi asks am I little kid to ask and go, I heard what Papa said, I went to meet Nikhil, I decided that Nikhil and I will have a live in. Raman slaps her and says this won’t happen. Ruhi says no need to do all this, I know what I m doing. Raman says I will kill her, explain her Ishita. Ruhi says I know what’s good for me, you did much planning, Ishita acted to support me, Shagun keeps playing games. Raman says mind your language. Ruhi says I will just do this and show, I was thinking about taking this decision, now I m even more sure, I will have a live in with him, you do anything you want. She goes. Raman says I will kill her. Ishita says we have to use mind.

Aaliya sees Adi working. She packs her bag. She says Sadu, he will know when I leave. She looks at him. She says I m going. He asks are you really going. She says yes and smiles. He says listen, enjoy well, send me pics, bye, take care. She gets angry and leaves. Adi smiles.

Raman says we have to stop Ruhi, what nonsense is she saying. Ishita says what if we don’t do anything. He asks what, how can you support. She says I don’t support live in, Ruhi is our daughter, you can see Ruhi is also uncomfortable with it, if we talk to her, she will not understand, we have to explain her that live in will get problems, we have to make her realize and change her decision, she thinks we are her enemy, its better she realizes on own through examples or actions. He says my mind is not working. She says we will be around her, we tried everything. He agrees. They think why is Ruhi doing all this.

Shagun getting angry on Ruhi for a live in. Ishita stops her for being angry on Ruhi and making her rebel. Shagun says I blackmailed Pooja to make Nikhil leave. Ishita asks what, how did she agree. Shagun tells her everything. She says I have a doubt some Bhalla member has an affair with Pooja, so I blackmailed her. Ishita says who can it be. Parmeet comes home and thinks to know what family is going through because of Ruhi. He finds everyone normal. Ruhi comes and talks to Parmeet. She says I just told Raman and Ishita about my decision, they didn’t say anything, they understood they can’t force decisions on me. He says its good, I will meet Ananya. She asks him to take pasta for Nikhil. He says sure, pack it. He thinks to see what Raman and Ishita are planning.

Shagun says I have seen that navratri bracelet also, Pooja has hidden it. Ishita says I believe this, Ruhi has also seen someone from our family with Pooja. Shagun says it means I m thinking right, she was nervous, who can it be. Ishita says don’t know who is it. Parmeet hears this and thinks to use this to create distance between Ishita and Simmi. He greets Mr. Bhalla and Simmi. Ishita and Shagun come. Parmeet says I did a mistake, I lost the bracelet which mummy ji made for me, maybe it fell somewhere. He thinks my new drama will create a fight.

Simmi asks where can it be. Mr. Bhalla says Mrs. Bhalla will feel bad. Parmeet says I regret, I don’t remember. Ishita asks him to check on terrace. Parmeet goes to see. Shagun takes Ishita to room and says I have seen same bracelet at Pooja’s house, Parmeet was with Pooja, he maybe acting. Ishita recalls jeweler’s words. CONTINUE READING NEXT PAGE 2 BELOW