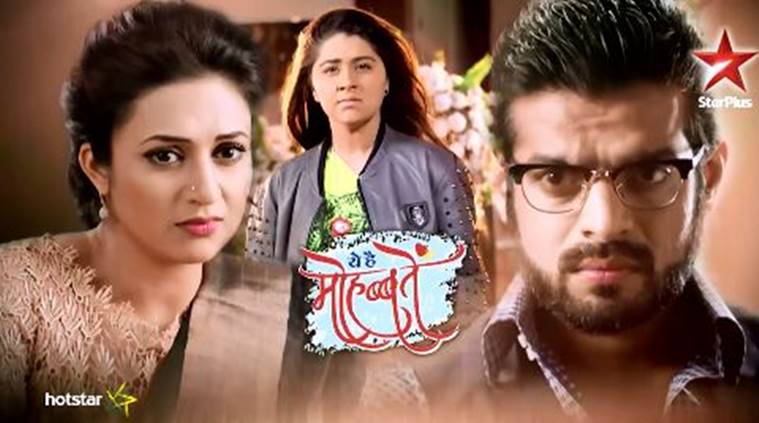 10th January Thursday Update On This Is Love

Ishita asking Raman to stop this marriage, Adi is already married. Raman says Adi was forced to marry, that marriage got annulled. She asks what are you saying. He says let this marriage happen, then we will talk. She says Aaliya should know truth. He says we will tell after marriage. She says why, she should know it, they love each other, how did Adi lie. He says he loves Aaliya so he has lied, what kind of mum are you to not see Adi’s helplessness. She says I failed today, if my son can’t trust me and share things, what kind of mum are you. I taught him to respect women, he left Roshni in the city alone, he can’t respect a woman. He says he did wrong, maybe he was afraid of you, maybe he thought he will fall in your eyes, he loves you, he was helpless, parents do a lot for children.

Ishita says parents don’t support children in lie. He says if Aaliya takes wrong decision, if their lives ruin then, their marriage is annulled, I fold hands, please let this marriage happen. She says lie is lie, it should be Aaliya’s decision to go for this marriage or not, they both are my children, Adi did this, but Aaliya has right to know. He says fine, do anything, you don’t care for their lives. She says Aaliya’s trust will break, this should be her decision. He says please let this marriage happen, their lives will be spoiled, please for my sake, for your upbringing sake. He holds her hand and requests.

Adi asks Mihika about Raman, Romi and Ishita. Mani asks what’s happening. Mihika says they would be coming. Adi thinks where is Romi. Pandit says we can’t wait for them more. Raman and Ishita come. Everyone smile. Mani says they look in tension, I hope everything is fine. Ruhi says Adi will get Aaliya forever, so have patience. Raman asks Ishita to see Adi, he looks so happy. Mani asks Raman where was he. Raman says sorry, pandit start it now. Baweja says I don’t want to stay here now. He gets leaving. Romi stops him. Baweja asks who are you. Romi says it does not matter, what was the need to tell everything to Raman, Adi is a kid, he annulled his marriage and now he is remarrying. Baweja says I said truth, he came in morning to annul marriage, he is marrying in evening, none knows about this, why does he not tell truth. Romi says he did not wish to trouble anyone, so he did this. Baweja says he is a fraud, I have seen many people trapping people and marrying, annulment did not get registered till now, he is cheating the girl, I know everything. Romi catches him. Guard stops Romi. Baweja says you will pay for this and leaves. Adi and Aaliya’s ghatbandhan breaks. Ruhi ties ghatbandhan again.

Pandit says now pheras will bind husband and wife in a relation of seven births. Adi and Aaliya take the first round. Pandit tells first vow, that husband respects, supports and be loyal to his wife. They take second round. Ishita recalls Gagan’s words. She thinks I m Aaliya’s mum too, Adi is hiding big thing, how can I be quiet. Pandit says second vow is to have decisions together. They start taking third round. Pandit says third vow is husband and wife will stay together in happiness and sorrow, relation is formed by truth, there is no place for lie. Ishita shouts stop. They all look at her.

Ishita goes to Aaliya on stage and asks her to come. She takes her. Shagun asks what’s happening, Raman… Raman says I don’t know. Aaliya asks what happened, you got me here this way, tell me. Ishita says you trust me right. Aaliya says I trust you a lot. Ishita cries and says I have to tell you something, you have to know this about Adi before marriage. Aaliya asks what is it, why are you crying. Ishita says Adi is already married. Aaliya gets shocked and sits. Ishita says Adi did not wish to cheat you, he loves you a lot, we also got to know this now, he was forced to marry in Khandpur, he was afraid to lose his love and could not say, I m hurt to tell this way, I m sorry, if I did not say, it would be cheat with you, say something. Mani says Raman tell me what’s happening, Aaliya is my daughter, I m really worried. Shagun says what’s wrong with her, Ishita took Aaliya from mandap, ghatbandhan broke, its abshagun. Mrs. Bhalla says reason would be big, Ishita is sensible. Shagun argues. She asks Raman and Mani if they are coming alone. Everyone rush to see.

Servant calls someone and says marriage stopped in between, Ishita stopped it, as judge told her Adi’s marriage truth, judge threatened of not leaving Bhalla family, judge name is Baweja. Shagun asks Aaliya what happened. She asks Ishita what did she tell her. Mani asks Aaliya to say what’s the matter. He asks Ishita what’s happening. Raman stands worried. Mani shouts asking Ishita to say. Adi comes and holds Aaliya. Aaliya shouts and makes him away.

Adi asking Aaliya to listen to him, there was problem in factory, the electrician died in an accident, I was blamed for his death, they have made me marry his fiancee at gunpoint, I m not lying, I was helpless. Aaliya says you were helpless that time, not now, you should have told me once, you don’t belief your love, you thought I will not understand you, there is no use for this relation. He asks her to understand, he did not say it as he did not wish to lose her. Everyone look on. Adi says marriage is annulled, trust me. Aaliya says I don’t trust you. Roshni says Adi is saying right, marriage done at gunpoint is not marriage. Aaliya asks how do you know this. Roshni says I know everything, as Adi got married to me. They all get shocked.

Roshni says Adi just loves Aaliya. Shagun scolds her. Aaliya asks all of them to go out, leave her alone. They all leave. Aaliya cries. Raman says Adi should be happy, Ishita is great mum, she has ruined Adi’s life, this is the truth. He scolds Ishita. Ishita says I can never ruin their life, I can’t get Aaliya cheated, she had to know truth, Adi will get his love if his love is true. Raman says this love talk does not suit you. Roshni asks Ishita why did she tell them. Ishita says why did you not say.

Roshni says this is not marriage, Adi loves Aaliya a lot, he was silent as he was fearing to lose her, I was silent as I don’t believe in this marriage, Adi and Aaliya have love in between. Raman says Ishita broke Adi’s heart, as she did not wish to break Aaliya’s trust. Shagun says I will never forgive Ishita for this.

Baweja comes home and says what does Raman and his ill mannered brother think. He recalls their words and sees annulment papers. Ashok comes and takes paper. He introduces himself. He says I m also Raman’s enemy, if papers burn, who will prove Adi’s annulment. He burns the papers.

The guests ask will marriage happen or not. Pammi says it will happen. Ruhi says sorry, Papa and Ishi maa had to go for some urgency. She asks them to go and have dinner till then. Bala asks Ruhi not to worry, everything will be fine. Adi asks Aaliya to open the door and listen to him once. He apologizes. Raman asks Adi to control himself. Adi cries and sees Ishita. He asks Ishita what now, I always had your values, I have annulled the marriage, you used to say I m your pride, belief and courage, could you not believe me, why did you tell Aaliya, biggest truth is I love Aaliya, you know this. Everyone get sad. Adi says you said one you love, we should not break heart of that person, what mistake did I do to hide this, I did mistake to walk on your values. Ishita slaps him.

She asks are you walking on my values, you have grown up, did you see Roshni, she is a woman, whatever happened with you, you left her in a park and did not care for her, we were finding her husband, you changed her husband’s pic, it became a game for you, was this my values, you lied to everyone, you are saying you love Aaliya, you lied to her, breaking heart is not right, is lying right, you misbehaved with Roshni, why did you forget your values.

Romi says its not Adi’s mistake. She says please, I m talking to my son, I don’t want anyone to come between us. She asks Adi why did he hide it from her parents, if he was scared he will lose Aaliya, what would they do, would they kill him, they would have scolded him and solved his problem but you did not trust us, you slapped my upbringing, you have lied by thinking well, love foundation is not a lie. He says I did not wish to cheat Aaliya, I was afraid I will lose her. Shagun says just shut up Adi, you cheated my daughter, Ishita you think you did this for Aaliya’s happiness, is she sitting happy, Raman why did you tell Ishita, you should have not told her. Ishita says let anyone feel anything, I just know Aaliya should know truth before marriage. Shagun says see what your truth has done. Adi goes.

Ashok says I had a man at the venue, so I got to know this, now we have become partners, I know about Adi and Roshni’s marriage, I wanted Adi to do second marriage so that he does marriage and truth comes out, Adi was smart to do annulment, see the ashes are here. Baweja asks do you think this marriage will happen. Ashok says it won’t matter, we will not let Bhallas go so easily, Lord is great, someone comes as angel when I have to ruin Bhallas. Adi cries and hits the car. Romi asks him did he go mad. Adi says if I don’t marry Aaliya, I can’t live, I love her a lot. He hugs Romi and cries. He says Aaliya went away from me. He sits crying. He says everything got over and shouts. Romi cries.